How many times have you been in an unfamiliar place and whipped out your phone to check your GPS? Maybe it was on a road trip, maybe you were in another town for business, visiting a friend or looking for some stellar food on the open road.

This incredible achievement that has added so much convenience to our lives may not have been possible without the help of a brilliant woman of color. 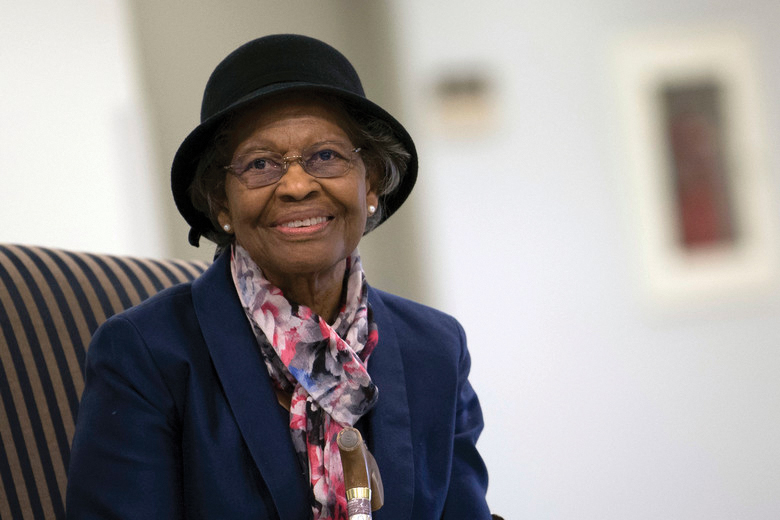 Dr. Gladys West is inducted into the Air Force Space and Missile Pioneers Hall of Fame during a ceremony in her honor at the Pentagon in Washington, D.C., Dec. 6, 2018. Photo by Adrian Cadiz.

Gladys West was born Gladys Mae Brown on Oct. 27, 1930 in Sutherland, Va. Much of her childhood was spent harvesting crops alongside her family and peers, a fate that was common for Black Americans in former rebellious states nearly 70 years after the Confederacy lost the Civil War. Even at a young age, West knew that life had more in store for her, if only she was able to reach it.

West realized that schooling and education held the path out of the field. Her teachers saw tremendous potential in her — particularly in her aptitude for mathematics — even at a young age. She graduated valedictorian from her high school and was awarded a scholarship to Virginia State College, later Virginia State University.

West earned her M.A. in mathematics while teaching for a few years after graduating from college, and was eventually offered a position in the U.S. Naval Weapons Laboratory in Dahlgren, Va. This was a field that was almost exclusively dominated by white men at the heart of a segregated southern state, yet West was eager to hold her own in an environment where there were only three other people of color. She certainly did just that in the lab, and continued working there for the next 40 years.

It was here that she met her husband, Ira V. West, who was one of the only other Black mathematicians on base. As it stands, they’ve been married for more than 60 years and have a number of scholarships dedicated in their name to help high school students around the country — and especially in Gladys’ home state of Virginia — pursue their college ambitions.

Early in her career at the Naval Weapons Lab, West’s brilliance was clear to her peers. She was able to calculate complex mathematical equations by hand while many of those around her needed to log their equations. She was soon tasked with programming some of the earliest computers available. These were complicated machines that are nothing like the machines we use today, which have an immense amount of space to store information and calculations.

The computers of 1959 were essentially large switchboards whose switches represented binary code, while some had loaders into which you would place paper punch cards with equations, triggering the process into running the equation and creating a primitive program. The computer engineers reading this are laughing at my wildly simplistic explanation, but that’s fine — these were specialized devices created for extremely specific purposes and that’s far above my level of expertise. If you have extensive knowledge of how the computers from the 1950s to 1970s worked, let me know and we’ll turn it into an article together.

The closest approximation I can make with my admittedly limited knowledge of computer science is this: While modern coding languages like C# operate using  commands such as start, stop, if, if then, etc. The early computers operated strictly through numeric calculations that first had to be performed by a human, and the human in this case was the exceptional Gladys West.

To put into perspective just how brilliant of a mathematician she was, she was a programmer for Project 29V, a project to track Pluto’s motion in relation to Neptune using the Naval Ordnance Research Calculator, which required more than 5 billion calculations to be performed during the course of 100 hours of computer calculation. As anyone who’s ever performed any form of programming knows, a single error anywhere in your code will create a compiler error and force you to spend minutes, hours or even days dredging through lines for your mistake.

By 1978, West had become the project manager for SEASAT, the first generation of satellites that would track ocean data and, thanks to West’s calculations, was even capable of measuring the depths of the oceans. This laid the groundwork for the team to create extremely accurate models of Earth by measuring gravitational forces on the geoid, or the shape of the oceans under the gravitational effect of Earth.

Interestingly, the concept of the geoid was more than two centuries old, but could never be proven or recreated accurately until the 1970s, thanks to computers and mathematicians like Gladys West. This is another extremely complicated subject we’ll need to revisit another day.

West’s work was the basis for what would eventually become the Global Positioning System, or GPS that has completely revolutionized modern living.

As anyone who’s ever gone on a road trip knows, travel is about more than just navigating a two-dimensional plane. We need to be able to account for inclines, weather patterns and the pull of gravity on our vehicle — particularly when driving through mountain passes. Without Mrs. West’s incredible calculations, we may never have been able to overcome these challenges with the immense precision that we do today.