Mad About Science: Mission to Europa

Elon Musk and Jeff Bezos hog the spotlight with their spacefaring adventures. It’s been a while since we’ve heard about all of the cool stuff NASA has been doing. 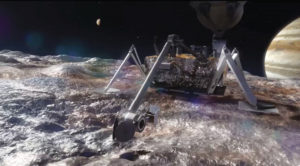 One of the most interesting things I’ve read about recently is the Europa lander mission, slated for the mid-2020s. Europa is the smallest of Jupiter’s four Galilean moons and also what could be one of the most habitable places for life in our solar system, aside from Earth. That is a pretty shocking statement when you consider the surface temperature of Europa is anywhere from negative 370 to negative 260 degrees Fahrenheit. Much like your favorite library book, you mustn’t judge Europa by its cover; while the surface is colder than a South Dakota oil field in February, thermal energy rises from its mantle to create zones of liquid water beneath its icy crust.

It’s tempting to think water under the surface of Europa could be a balmy 33 degrees, but this isn’t the case. Europa’s liquid oceans are likely much colder than that, with a low end around minus 85 Fahrenheit.

“But Brenden, I learned in seventh grade science that water freezes at 32 degrees F!”

This is true, but not always. Multiple factors influence the fluidity of water, including pressure and movement. Water has even been a unique way to keep an ambient temperature in a room from getting too cold. As water makes a phase change from liquid water to ice, it releases energy, which creates heat. Under optimal conditions, people have used water to keep itself from freezing entirely, because this phase change produces just enough heat to keep the water over its freezing point.

The most likely places for life to exist in Europa’s subterranean oceans are believed to be near geothermal vents, where pressure from the mantle breaks through the crust to release heat and pressure. These vents are a lot like pimples: there is a lot of outward pressure and they are great places for bacteria to live. Certain types of bacteria and other basic single-celled organisms called extremophiles pull energy from geothermal vents to survive in impossible conditions. We know about extremophiles because they exist at the bottom of our own oceans, where we’ve been able to observe them for decades.

I’m sure you’ve guessed it by now: NASA’s Europa lander mission is intended to discover signs of life, be it living or extinct. The mission is also a means for us to test the human habitability of Europa and analyze its surface and subsurface for future missions or potential colonization.

Humankind has been looking for signs of microbial life elsewhere in the solar system for a long time. It’s one of those things that we do and don’t want to find in equal measure. If humanity finds microbial life on another planet it would mean our one rock (Earth) isn’t the only place that can harbor life. Microbes also present the problem of The Great Filter, the idea that most life must be “filtered” into extinction at some point, or else we would have found some already.

Our current understanding is that conditions have to be absolutely perfect for microbes to evolve from a collection of random chemicals to a biological form. If NASA were to find evidence of thriving microbes on one or several bodies in our solar system, the idea of a Great Filter moves closer to where we’re standing now. Humanity has either passed this Great Filter, or we’re staring it in the face and don’t even realize it.

Nothing excites people quite as much as apocalyptic fantasy, but the Europa mission is pretty cool — aside from giving us insight into our own potential demise as a sentient species. Microbial life is the primary focus of the mission; because of that, NASA has to take meticulous care in not tainting the thing we’re trying to study with our own microbes. The lander and the skycrane that would transport it to Europa would have to be completely assembled and encased in different clean rooms before launch. The fate of the skycrane is to fling the lander into a descent trajectory towards Europa and then hurdle itself to a terrible crushing demise in the gravitational tide of Jupiter, so as to not accidentally rain contaminated bits and pieces onto the planet NASA is trying to study.

The lander would have a grim fate of its own after it completes its mission: equipped with an incendiary self-destruct sequence straight out of “Mission: Impossible,” it will be designed to destroy itself on command or if it loses contact with Earth for an extended period of time — similar to the infamous Soviet “Dead Hand” system during the Cold War.

The mission would also be a short one, slated to last only about 20 days on chemical energy generators as opposed to the radioisotope thermoelectric generators used on the Curiosity rover. It turns out the fuel source Plutonium-238 is hard to acquire, so NASA wisely wants to conserve its supply for huge missions like the Voyager probes.

In those short 20 days, the lander will be able to test all sorts of things, snap a load of hashtag-worthy photos and collect samples with a built-in drill, microscope and mass spectrometer.

The bulk of the time spent on the mission will be getting there, as Europa is about 390.4 million miles away. That means it would take about 35 minutes for a signal from the lander to reach Earth. If I were to drive my Chevy Blazer there, it would cost about $70,784,400 at today’s gas prices, which is much less than the current mission price tag of $195 million.

Yes, NASA? My Blazer and I would like to make a contract bid.