It’s time once again for all outdoor enthusiasts to gather at the altar of winter sport to herald in another year of movies from the mountains. 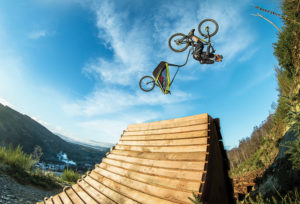 The beloved annual tradition is an inspiring international film competition featuring the world’s best footage on mountain subjects. Dozens of short films are chosen each year to show to audiences worldwide, with subjects ranging from cave exploration to mountain biking to climbing to skiing — each selection celebrating the great outdoors and our infatuation with exploring it to the fullest.

The festival began in 1976 in Banff, British Columbia but, a decade later began to reach out to other communities, touring a total of three cities across Canada. Today, more than 40 years later, Banff films trek to hundreds of cities around the world.

But, according to Sandpoint event organizer Michael Boge, each community gets a tailored experience.

“What I like for Sandpoint is I want something really broad-based,” Boge told the Reader. “I want adrenaline, I want culture, I want sport. You may go for a ski flick or a climbing one, but you’ll walk away with a favorite that you didn’t expect.”

This year’s lineup includes a great variety of short films from around the world sure to pique any North Idahoan’s interest.

In Opening the Earth: The Potato King, a U.S. film by brothers Eric and Aaron Ebner, Julio Hancco is the guardian of biodiversity, critical to the survival of humanity. Hancco represents a people, a culture and a way of life that is being lost to modernization. Will their culture survive or will it all be lost with the last Potato King?

Danny Daycare is a film from the United Kingdom in which master mountain biker Danny MacAskill takes on some child care the only way he knows how — by taking the kiddos for a wee bike ride around Scotland. This film is filled with hilarious and stupefying bike stunts involving kids — none of whom were harmed in the making of this short film.

Pete McBride and Kevin Fedarko’s Into the Canyon tells a story of extreme physical hardship where the bonds of friendship are stretched and the timeless beauty of the Grand Canyon becomes meditation — and, ultimately, a cautionary tale for our complex relationship with the natural world.

Canadian film Electric Greg follows climber Greg Hill, who sets out to climb 100 peaks without burning any fossil fuels. But the question is: Will it make a difference? Another climbing film offered is Reel Rock 13: Up to Speed. When climbing was announced as part of the 2020 Olympics, it was a monumental occasion for the sport. But many climbers were shocked to learn that one of the three combined events required to compete for a medal is speed climbing.

In a time when it can feel like you need to fly to the opposite side of the globe to find adventure and challenge, Surfer Dan proves that with dedication, grit and a little creativity, you might already have all you need outside your own backdoor.

This year, a portion of the proceeds from the event will support North Idaho Mountain Sports Education Fund, a locally operated program giving more than 70 local kids access to ski Schweitzer Mountain Resort. NIMSEF not only provides access to Schweitzer, but takes care of lessons, ski gear and lift tickets all with the hopes of establishing an early love for outdoor winter recreation for local youth. Jeff Rouleau with NIMSEF will be on hand at the Panida to run the raffle each night, with proceeds supporting the organization.