It’s beginning to look a lot like normal everywhere I go. Last week I made a trip to see travel clients in southern California who’d just emerged from lockdown. We celebrated their newfound freedom with an indoor dinner, plenty of cocktails and lots of good cheer at a yacht club near their home. It was new-found freedom for them, and while we were giddy in celebration, I still feel like I am one foot away from lockdown. For the past year, I’ve watched myriad borders open, only to close, again and again, with surging COVID-19 cases.

Though my phone is ringing busy with plenty of inquiries for travel and local catering events, my clients and I are holding our collective breath to see what summer brings our way. For now, my plate is filling up; and, quite honestly, after a year of nearly no income, it feels insanely good.

The only thing that might make me feel any better is dining at a favorite Sunday brunch spot. How I miss that weekend ritual. I have always been a sucker for midnight buffets, smörgåsbords and all other Epicurean displays, but I especially love brunch. It’s the best meal ever invented. Its origins remain a bit hazy, but according to numerous articles I’ve read — including one in Smithsonian Magazine — Sunday brunch derived from the practice of Catholics fasting before mass, followed by a large, midday meal.

British author Guy Beringer suggested an alternative to this large, post-mass meal in favor of lighter fare, served late in the morning.

According to Beringer, “It is talk compelling, it puts you in a good temper, it makes you satisfied with yourself and your fellow human beings, it sweeps away the worries and cobwebs of the week.”

I couldn’t agree more, especially when you add a Bloody Mary or mimosa (or both).

I don’t remember how I came to embrace brunch, but back at the (Montana) ranch, when the children were small, we’d often head to the Holiday Inn Parkside in Missoula for this Sunday ritual, which swept away more than a few of my worries (and isolation) of the week. It also gave me a chance to show off my darling toddlers, dazzling in “town clothes.”

Young Zane could smell the waffles upon arrival in the parking lot. On holidays, pricing for the children was quirky, and the hostess would plop them on a large produce scale, then charge by the pound (though Ryanne swears they weighed her in and out and charged by the weight difference).

After redirecting my life focus from cattle to cookery, which involved a lot of travel, I searched out brunches near and far from my weekend layovers. Occasionally I was able to take Casey along on these quasi-business trip experiences. The first time I surprised my preteen with a trip to the Big Apple, she surprised me with her fear of fine foods. There we were, seated like royalty in the Palm Court of the opulent Plaza Hotel, surrounded by lush greenery, gilded furnishings and a feast worthy of nobleness. We parted ways to find our food.

Before filling a plate, my brunch ritual is making a slow pass through each stunning station, savoring every tiny morsel well before it ever touches my lips. The ice carvings, the butter sculptures, the artful displays of fruit, and the lemon and parsley-laden seafood extravaganzas are as much a feast for the eyes as the belly.

I will never forget sitting back down that day, with a half dozen starter oysters in hand, tête-à-tête with Casey as I gazed at her $75 plate, which cradled one bronzed croissant and four bright red strawberries. She never even went back for seconds.

Subsequent Big Apple brunches proved more fruitful. The modern and matured Casey and I would fast on Saturday before getting our money’s worth at other notable Sunday buffets: the Rainbow Room in Rockefeller Center and Tavern on the Green in Central Park. Both still rank high among my favorites. Ryanne says I planned my trips around restaurants, and while that’s not entirely true, I did plan more than one New York business trip with a long weekend layover.

Who knows if and when my beloved bunches of brunches will ever return? Right now, I’m waiting to learn the fate of my local favorite, in Spokane’s treasured Davenport Hotel (and it’s as good of brunch as any I’ve ever experienced).

For now, I’ll be whipping up brunches for my bunch, preparing lots of our favorite Sunday dishes, like sweet and spicy ancho chili bacon, chicken livers sauteed with oodles of onions and frico, an “out-of-this-world” crispy potato dish that even your pickiest eater will proclaim palate-worthy (I admit, “out of this world” is a stretch, but it does originate from the northeastern region of Italy).

It’s a perfect potato dish for brunch or one of those neighborhood potlucks that are sprouting up all over Sandpoint. 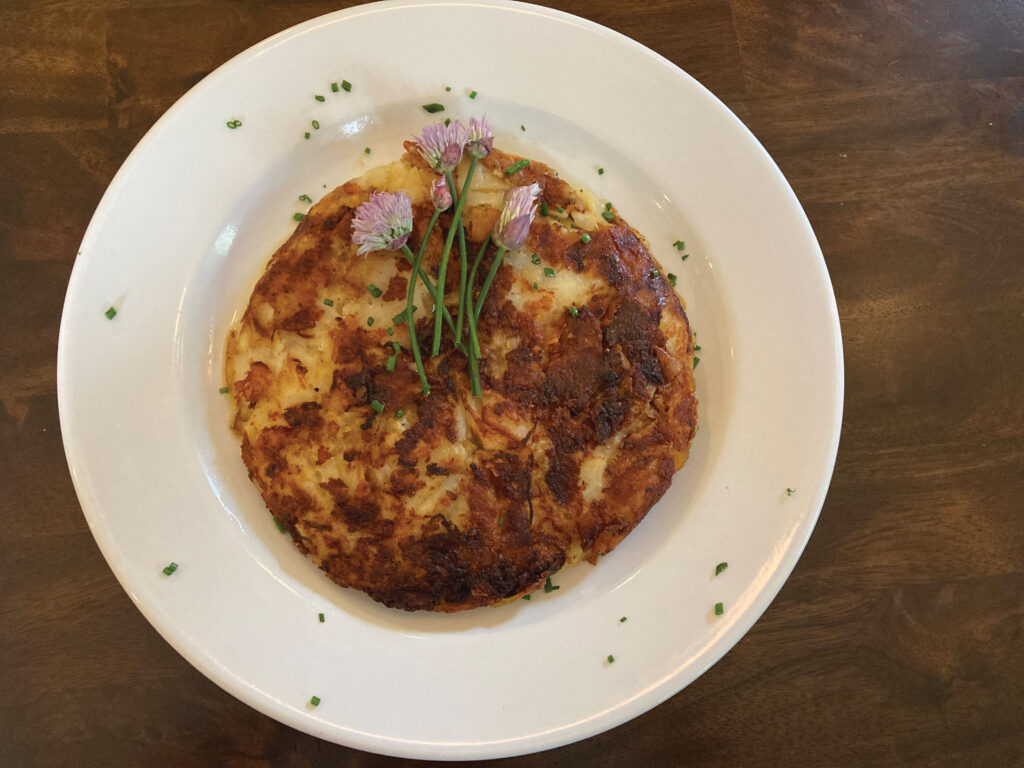 Here is a rustic Italian dish made with potato, onion and lots of Parmesan cheese. These simple ingredients come together in one fabulous dish.

Heat olive oil on medium and toss in the potatoes. Cook for about 5 minutes, turning frequently.

Add onions, nutmeg and pepper, and continue to turn until onions are translucent.

Slowly begin to add the Parmesan cheese ¼ cup at a time, stirring constantly.

Allow the potatoes to brown on one side and then turn to brown on the other side. (Use a large plate to do this, even better if you have a dual pan.)

The cheese and potato mixture should form a light crust on both sides. Test with a fork for softness in the potato and then it is done.

I like to caramelize the onions slightly to bring out their natural sweetness. I also like the potatoes to have a slight crispiness to add a layer of texture to the dish.

The cheese should be added a little bit at a time to allow it to combine well with the potatoes.

Potatoes should be slightly crispy on both sides, but not all the way through.

If you want to use a different cheese, make sure it’s a non-melty one, think hard Italian cheese:  Grana Padano, Pecorino Romano, Asiago D’allevo.