There was no love lost between Rep. Heather Scott, R-Blanchard, and the press last month.

During the organizational session for the 2017 Idaho Legislature in early December, Associated Press reporter Kimberlee Kruesi found herself killing time at the capitol lobby with Idaho Public Television journalist Melissa Davlin. According to Kruesi, the two Boise journalists spotted Scott and invited her to sit with them. The representative was unexpectedly cold to the invitation. 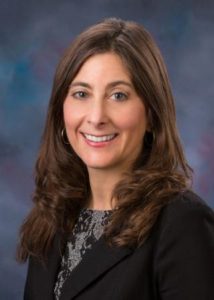 “She stopped and said, ‘I’m no longer talking to the press,’” Kruesi said. “She was about to leave, but [Rep. Mat Erpelding] asked her to sit down with us. She did, but then left quickly, repeating that she’s not going to talk to the press.”

“We weren’t hoping to interview her, just chat about literally anything (we had a lot of time to kill [that day]), so that’s why it was so surprising when she said it,” Kruesi added.

Brief media articles later reported that Scott was no longer speaking to the press as a matter of policy. Scott resisted that reporting in an emailed response.

“I am not sure who reported this, but this is a false statement,” she said.

Scott did not reply to a request for clarification of her encounter with Kruesi and Davlin.

The organizational session isn’t the only example of Scott’s cagey relationship with the press. Betsy Russell, Boise correspondent for The Spokesman-Review, said Scott has recently been selective on how she will answer questions.

“Rep. Scott hasn’t told me directly that she’s not talking to the press,”  Russell said. “During the campaign, I did speak with her a couple of times, but in recent months, she said she was only taking questions in writing via email. I did send her questions and she did respond (though not to all of the questions).” 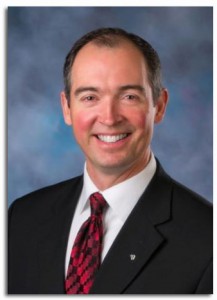 Scott’s mistrust in reporters’ good faith also manifested in the build-up to the November general election. She did not accept invitations from both the Bonner County Daily Bee and the KRFY Morning Show to speak alongside her opponent, Kate McAlister. And on the day of the candidate forum hosted by the Sandpoint Reader and Sandpoint Online, she denounced the event as a trap maliciously designed against conservatives.

“The local liberal media has hounded me for weeks to attend, in person, through others and in writing,” she wrote on social media. “However, by all indications, this forum has been put in place as a platform to harm conservative candidates and show Democrat candidates in a more favorable light as well as using this event to launch negative attacks on conservative candidates and the core values the majority of north Idaho voters adhere to.”

On the other hand, Rep. Sage Dixon, R-Ponderay, attended the forum, telling the audience it was important that voters have a clear view of the candidates they support. Dixon believes he has a largely productive relationship with the media, although he said there are certain individuals who skew stories along political lines.

“Being a participant in the political arena, I expect some negative press, so I don’t get too worked up about it when it appears, and try to control my message as best I can,” Dixon said.

Nevertheless, Dixon believes the search for punchy headlines can lead to improperly focused stories or media spin. Many of his supporters cried foul during the debate over a bill allowing the use of the Bible as a school reference, when Dixon was widely quoted as saying, “The little Supreme Court in my head says this is OK.” While the quote itself is accurate, Dixon said he intended the line as a joking, throw-away comment, and that context wasn’t communicated in press reports. 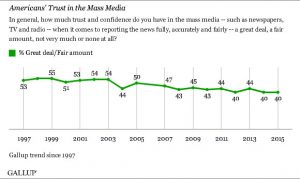 “Everyone on the floor knew my intention as I had just referenced that it was merely the opinion of other legislators to state that the Supreme Court would overturn this law,” Dixon said.

“As it came out of my mouth, I knew I was providing a headline for someone,” he added. “In hindsight, that was not the right debate to try and be humorous.”

Dixon said he tries to evaluate each journalist individually and doesn’t simply assume that they have duplicitous intentions. Even so, he thinks that the media as a whole has to work to earn back the trust of the public.

“Much news reporting reads more like editorials, and many people feel that their beliefs and values are denigrated, or that the whole story is not being told,” Dixon said.

Pew Research data backs Dixon’s observation that trust in the media—or at least, the mass media—is at its lowest point in years. In a 2016 study, only 32 percent of respondents said they had a great or fair amount of trust in the mass media. Republicans showed the least amount of trust at only 14 percent, while independents carried the center at 30 percent and Democrats showed the most trust at 51 percent.

The influence of the much-discussed social media echo chamber also shades those numbers. In a study of the two-thirds of American adults who use social media, Pew researchers found that 59 percent of users found engagement with opposing political views stressful and frustrating, while 35 percent said it was interesting and informative. The study concludes that a desire to avoid confrontation fuels social media users’ tendency to disengage from politically challenging ideas.

With distrust in traditional news media growing, Ashley is discouraged by a corollary rise in the spread of misinformation and conspiracy theories. He believes the solution is for news organizations to assert its value to the public by investing in their news reporting departments. Rather than cutting costs and reducing reporting positions, Ashley said the organizations that doubled down on those resources are thriving best in the new media landscape.

“We’ll overcome this,” he said. “We’ve faced technological hurdles in the past and gotten past them.”