It’s been a longtime dream of local PFLAG President Jeff Bohnhof to host a Pride celebration in North Idaho, but it wasn’t until 2021 that the pieces fell into place for Sandpoint’s first ever Pride Festival, slated for Saturday, July 17 in the city’s Granary Arts District.

“It’s been something we wanted to do over the years, but it takes a certain amount of people and effort to get it done,” he said. “We just didn’t have that until this year.” 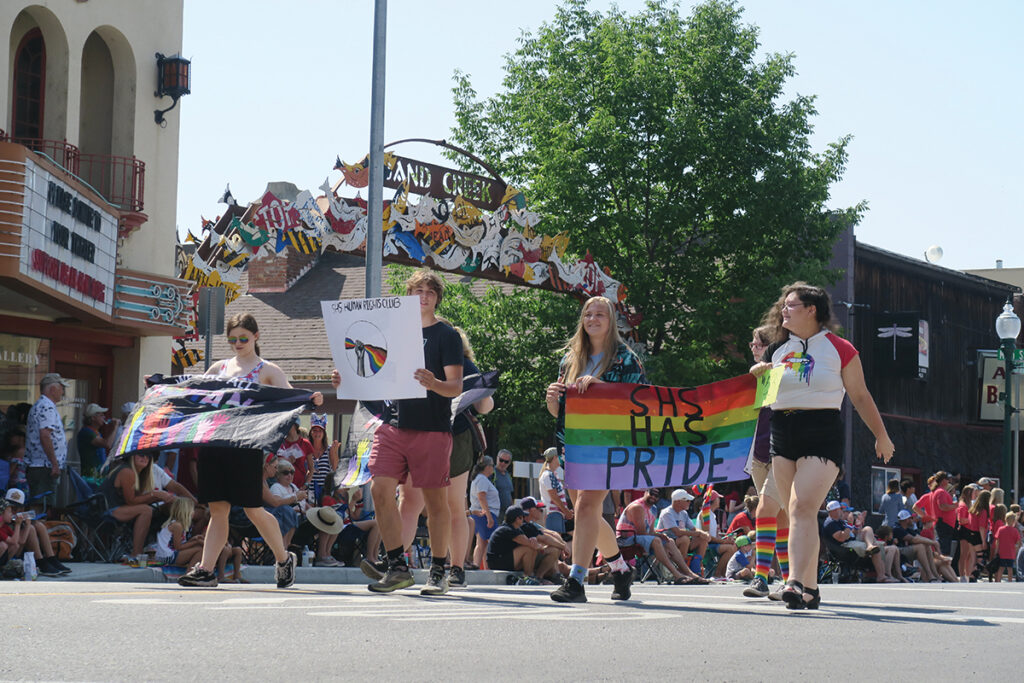 A pride float in the 2021 Fourth of July parade in Sandpoint. Photo by Ben Olson.

Part of that effort comes in the form of business partnerships — namely, co-hosts Matchwood Brewing Company and Evans Brothers Coffee, located on either side of the Granary Arts District between Church and Oak streets.

“Matchwood is honored to serve as a host to Sandpoint’s first Pride Festival,” Matchwood owners Andrea Marcoccio and Kennden Culp shared in a joint statement to the Reader. “As small business owners, we intentionally created a space to connect our customers to each other to build and foster community. In a world that is becoming increasingly disconnected, we seek to offer an oasis for personal connections — a space where people feel welcome, safe, cared for and appreciated. And, we are damn proud to be allies of the LGBTQI+ community.”

Rick Evans of Evans Brothers Coffee said his roastery is excited to be a part of what is sure to be a “sweet and fun event.”

“We believe strongly in inclusivity, in love and respect for all,” he said. “We are proud of our friends in the LGBTQ community, and excited to celebrate with everyone.”

That concept of inclusivity is echoed by the Sandpoint Pride Festival’s slogan: “All Are Welcome.”

“The acceptance, the inclusivity, the welcoming feeling — that’s what we’re going for,” Bohnhof said. “We want to bring that across to the rest of Sandpoint.”

The Sandpoint Pride Festival kicks off at 2 p.m. and will feature advocacy booths, an art installation and several speakers, including keynote speaker Rep. John McCrostie, D-Garden City, the first openly gay lawmaker in the Idaho Legislature and assistant minority leader.

The festivities will continue into the evening with live music, a drag show and dance party.

Attendees will have the chance to bid on silent auction items, including gift cards from local businesses, prizes from Schweitzer and a pair of tickets for the family matinee performance at the upcoming Festival at Sandpoint.The event will also feature a bounce house, kids’ activity area and face painting, so there is something for every member of the family at Pride.

While there has been negative feedback following the announcement of the town’s first Pride — “That’s to be expected,” Bohnhof said — the positivity coming from businesses and people willing to help out and sponsor the event has been overwhelming.

While he knows it may take years, Bohnhof said he hopes events like the Sandpoint Pride Festival will play a part in creating a community where “any LGBTQ couple can feel safe walking down the street holding their partner’s hand.”

“I just want them to leave feeling uplifted and accepted,” he said of Pride attendees. “I know there are kids and young adults, even adults, in Sandpoint and the surrounding area who are not out just because of North Idaho’s climate and environment. I want them to feel like, ‘OK, I’m important. I’m OK. I’m not broken, and it’s OK for me to be out.’”

To see the latest updates and learn more about the Sandpoint Pride Festival, find the event on Facebook.