The Sandpoint Eater: Apples and potatoes for posterity

A couple of weeks ago, I answered a call from a lifelong friend, Dan. He’s more like a brother, really. His mother, Grace, was a mentor who taught me all the life skills a modern girl needed 40 years ago.

Sadly, this past spring, Grace fell and broke a hip, followed by myriad complications. I remained steadfast at her side until the end. Soon thereafter, I returned to Helena, Mont., for her memorial tea. In her honor, I read aloud a Sandpoint Reader column I’d written about her a few years back (“My Saving Grace,” February 4, 2016). Grace often referred to me as the daughter she always wanted and the sister she never had. She was stylish and sophisticated. In today’s terms, she was a food and lifestyle influencer; and, to this day, I still feel her inspiration in my cooking and entertaining style.

Between Grace’s flair and my own mother’s “meat-and-potato” practicality, I had the best of all cookery worlds.

Dan was anxious to find the recipe and carry on the tradition of his mother’s legendary potato salad, prepared every Fourth of July since he could remember. I spent a lot of time in her state-of-the-art ’60s kitchen, carefully prepping ingredients for her favorite dishes, including the potato salad (which is nothing like mine).

“Don’t overcook the potatoes,” I warned Dan, “and be sure to let them chill before cutting them.”  Grace liked her potatoes diced into perfect, small, firm cubes. “Do I add vinegar?” he asked.  “No,” I shook my head and implored, “it’s plenty tangy from the Miracle Whip.”

Grace’s fridge was never without an over-sized jar of Miracle Whip, dolloped and spread generously on the sandwiches and salad she served (you guessed it: I am on Team Mayo).

I continued to share, to the best of my recollection, the rest of the ingredients and guesstimated the quantities. Dan was grateful and later reported that the salad tasted just like his mom’s, though he lamented that this recipe — along with many of his other childhood favorites — had never been committed to paper for posterity.

My children have begged me for recipes over the years. During my time in the restaurant business, I created detailed recipes for my kitchen staff (often with pictures of the finished product), but I never seemed to get around to family-sizing portions or instructions. Through this column, I’ve shared a hundred or so favorite recipes with my readers (which includes my kids, who are thankful for my efforts), and it’s not uncommon for friends and family to request a recipe they’d like to see in an upcoming column.

I love sharing my recipes and feel joyful and honored when someone asks for one. Have you ever asked for a recipe and were turned down? I have and it’s awkward. More than once I’ve heard the mantra, “it’s a family secret.” Now, unless you’re related to Colonel Sanders, I can’t understand that logic.

I’ve come to learn that people who don’t share recipes fall into a few categories: the ones overwhelmed by the thought of actually measuring ingredients and committing them to paper (I tend to fall into this group); cooks who use a lot of prepared mixes and are embarrassed to admit it (though there should be no shame here — I recently visited the Smithsonian Museum of American History and took in an exhibition related to convenience foods); and then there are the people who feel their recipes are extra special, sacred or secret.

Let’s face it, though, the secret isn’t always in the recipe or the ingredients. For years, I watched my mother cut lard into flour, sprinkle on a bit of ice water and roll-out perfect, thin circles of dough; placing one in a waiting pie tin, adding a slightly sweetened bowl of sliced apples, dampening the rim, slapping on a top crust, crimping it, scoring the top and throwing it in the oven. An hour later, the aroma wafted through our kitchen, where we waited for the pie to cool — barely — before we dug in.

It was one of the first recipes my mom wrote down for me shortly after I was married. I labored and struggled with her instructions, throwing away more discs of dough than anyone will ever know. Sometimes, the pie crusts wouldn’t seal and the fruit filling escaped between the edges, filling the bottom of my oven with a charred mess and my kitchen full of thick smoke. I persisted and, somewhere along the way, the dough held its shape — it rolled with ease and sealed at my fingertips.

Having the recipe alone wasn’t enough to master the technique. Only practice would do the trick.

Sometimes, I pull out that most sacred recipe, handwritten in (fading) pencil, on a simple index card. It’s still my favorite pie recipe, which I have shared, eagerly, with every request.

Another standout in my collection of mom’s recipes is for chocolate chip apple cake. I used to make it often, as it was easy to prepare and a good match for my early culinary skills.

Perfect for summer, it stays moist for days and travels well to picnics and potlucks. It was also a favorite with our cowhands, packed in saddlebags, on the fall roundup circuit. Whenever I come across these dog-eared cards in the recipe file box, I’m grateful to my mother for recording this part of our history.

If you haven’t documented your clan’s recipes, there is no better gift or legacy to leave behind. Get a list of family favorites and get busy.

Fern’s Apple and Chocolate Chip Loaf Cake
I have been making this cake for 40 years and it never fails me. It’s dense and moist and is a great summer (or fall) traveling companion. Take along to picnics and potlucks (also great in sack lunches). Sometimes, I add a cup of pecans. 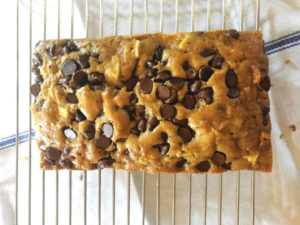 In a large bowl, whisk together the dry ingredients.

Make a well and add oil, eggs and vanilla. Mix well by hand. Batter will be thick.

Stir in apples and chocolate chips (and nuts, if desired).

Bake in center of oven at 325 F for 45 minutes to 1 hour, or when inserted toothpick comes out clean.

Cool on rack. It freezes well, too.