Where community and coffee collide

It’s nearly 80 degrees in the roasting room at Scotchman’s Coffee on a sweltering, early-summer day. The small drum roaster heats up while the three of us — roaster Dustin Drennen, pastor Nick Larsen and I — monitor the various temperature gauges and wait patiently to add the raw beans. 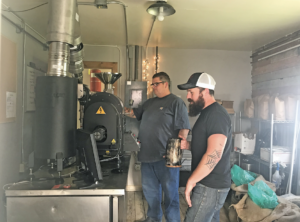 Drennen tells me: “You’re going to see the magic.”

The magic lies partially in watching and smelling the transformation of the small, green coffee beans into pungent, glimmering morsels of roasted goodness. But mostly, the magic is happening between Drennen and Larsen as they work together, speaking their own language, to achieve a roast they’ve done only once before. It’s a perfect personification of the symbiotic relationship between Scotchman’s Coffee (Drennen) and Living Water Lutheran Church (Larsen), as they undertake a venture that’s equal parts business and fun at the church’s secondary property, known as The Well.

“This is the most fun I’ve had in my life,” Larsen says as the beans roast, adding quickly, “OK, not my life, because I’ve got kids.”

“There are many times my kids aren’t as fun as this,” Drennen counters. “And you can go on the record with that.”

Scotchman’s Coffee is the second time Drennen and his wife, Robynne Hoffman, have entered the coffee roasting realm. They owned and operated Rough Rider Coffee in Phoenix, Ariz. for a few years before moving to Clark Fork in 2014. Hoffman runs the front of the shop, which offers coffee, other drinks and food, while Drennen roasts the coffee and creates the art seen on the various blends — Elderberry espresso, Midnight Yard Sale dark roast, Pend Water cold brew (pronounced like Pend Oreille) and many more.

The business’ namesake, Scotchman Peak, is visible from the front window. 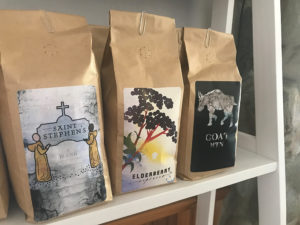 A few of the blends
available from Scotchman’s Coffee. Photo by Lyndsie Kiebert.

“We wanted (our name) to tie to the community, because even though we hope our coffee goes lots of different places, we wanted to provide something consistent for the community,” Drennen said.

Living Water Church acquired The Well in 2016. The church — located just a couple blocks away — doesn’t own Scotchman’s Coffee, but Larsen said having it as a part of The Well contributes to the building’s overall purpose to serve as a “place to build relationships.” The building will also soon be home to a weekly soup kitchen, and Larsen hopes its uses expand from there.

Though it’s still in the works, Scotchman’s Coffee plans to offer a coffee subscription service specifically for churches, inspired partially by Drennen’s having been raised in churches that had “the worst coffee.” He, Hoffman and Larsen decided that instead of coffee in church being an afterthought, it should be delicious and affordable — Scotchman’s Fellowship blend, specifically — and serve a larger purpose. Hoffman said the idea is to include a newsletter with each shipment that highlights a ministry or mission submitted by one of the Fellowship coffee churches, creating connections and fundraising opportunities beyond the coffee.

Scotchman’s Coffee is offering coffee subscriptions for individuals online at scotchmanscoffee.com, as well as selling bags and slinging drinks at The Well: 302 E. 4th Avenue in Clark Fork.

“The vision is to just love people,” Hoffman said of the shop as a whole. “To talk to people and get to know people in our community, and foster relationships over a good-quality cup of coffee.”