‘Stranger Things’: When nostalgia gets old

Editor’s Note: This article contains a few spoilers, so read at your own risk.

As I wrapped up the third season of “Stranger Things” last week, I was left feeling as if the nostalgic magic was wearing off a bit from Netflix’s popular show. 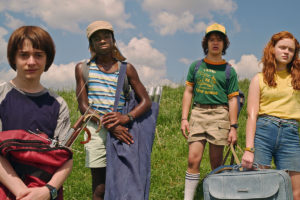 “The strength of the show rests on the shoulders of the child actors.” Courtesy photo.

Don’t get me wrong, the third season of this monster-fighting epic set firmly within the nerd culture of the 1980s is worth watching — especially if the first two seasons hooked you. But the Duffer Brothers’ slips are showing a bit as they navigate between seemingly-forced product placements and familiar plot ground, as the gang again discovers a monster is killing people and again set out to destroy it. (Kind of like how folks in the “Star Wars” universe have been blowing up planet/moon-sized battle stations since the real-life late-’70s/early-’80s.)

This season begins one year after season two, which concluded with a giant monster looming over The Upside Down version of Hawkins High School. Meanwhile, the kids have entered that awkward — hard-to-sympathize-with — phase of puberty, with some love interests driving the plot. Mike and Eleven’s budding relationship is testing Hawkins Police Chief Hopper, who is also battling his own feelings for Joyce, despite their constant bickering. Will laments that the friends’ new love interests are disrupting their once-all-important Dungeons and Dragons play. Max and Lucas explore their own relationship, while Dustin returns from summer camp with — you guessed it — a long-distance love of his own to tell the gang about.

The Starcourt Mall, in all its fabulous ’80s style, is the focal point of action in Hawkins, Ind., driving mom and pop shops out of business. When some of the kids notice strange (uh-oh!) power fluctuations triggering Will’s awareness of something from The Upside Down world, they also notice some of the town’s residents are showing stranger (double uh-oh!!) signs of odd behavior.

While the first two seasons crafted a supernatural setting beneath Hawkins — in more ways than one — the third season introduced a literal, one-dimensional Soviet underground facility that doesn’t quite convince me.

A few questions rattled around my brain while plodding through season three: It seemed like the crazy events of the first two seasons would have impacted the world of Hawkins a bit more, but it seems as if everything somehow went back to normal and everyone had forgotten the supernatural monsters’ killing rampage. It seems far-fetched that some of the kids weren’t suffering from some form of PTSD or that the townspeople don’t seem to remember or care about the otherworldly events of previous years. The strangest thing in this season of “Stranger Things” is the overall robust mental health of Hawkinsonians.

As ever, the strength of the show rests on the shoulders of the child actors, who inject so much personality and heart into their performances. Yet, while the audience bathed in the comfortable warmth of nostalgia in the first two seasons, that bathwater has gone lukewarm in season three. The simple reality: You can’t play off these feelings over and over again. As the show progresses and the children grow into teenagers, the show seems to be off as a result. Nostalgia, by its nature, doesn’t age but the Hawkins kids stubbornly keep getting older.

With the showrunners already committing to a season four, I worry they could fall into the trap of milking a show well past its effectiveness — “Wonder Years,” anyone? When does nostalgia and homage turn into parody? How many times can monsters really attack a town before the residents (and the rest of the world) figures out they should probably just move?