It’s soup season, and in anticipation of the cold and snowy months ahead of us, I’m already stocking my larder. Though I rely on many of my mother’s recipes for the soups of my youth, the truth is I’ve yet to meet a soup I didn’t like.

Years ago, I worked at a restaurant in Montana and loved its house specialty, a rich and creamy clam chowder. The owner parted with his recipe and I learned the creaminess came from using canned, condensed milk. I also learned with my first batch that there’s a huge difference between condensed milk and sweet condensed milk. I should have pitched the whole batch right then, but gosh, those clams were expensive so I kept doctoring it. Turns out no amount of salt, pepper or additional clam juice could fix my sweet clam chowder.

That wasn’t my only soup mishap. Years ago, I was part of a startup tour company that operated luxury sleeping trains over Montana Rail Link’s route from Sandpoint to Livingston, Mont. This particular route — formerly the Northern Pacific — had not seen passenger service since Amtrak took over all passenger service in 1979, and we were eager to showcase our magnificent region. I worked extensively with the high-end clientele, which included nonprofit travel groups, such as Smithsonian, National Trust and Stanford University, to provide and promote regionally sourced foods.

I chased down smoked trout from Salmon, Idaho; caviar from Whitefish Lake; crazy-expensive bison tenderloins from central Montana; and organic chickens and rabbits from the Milford Hutterite colony in Wolf Creek, Mont. These were not foodstuffs that were handled by distributors, so, during train layovers, one of the galley staff or I would load a rental car with coolers and ice and rendezvous on a county road (or country bar) to meet up with the respective vendor or farmer.

Once I had my wild hare and other organically-grown fare, the galley crew would spend a couple of days prepping the meals, including three, four-to-five course dinners. The welcome dinner included consommé of wild hare, which took hours to prepare. First, the rabbit was poached until it fell off the bone, then the stock would be strained and simmered until it was reduced to a rich amber color. Finally, the stock was strained through cheesecloth and clarified with egg whites until not a drop of fat remained.

The dining car, The Missouri River, was a classic 12-table, 48-seat diner car. Each table was carefully set three times a day with fresh linens, flowers and table lamps (no open flames for a rail car). The staff looked sharp too, in crisp white shirts, black bow ties and fitted bistro aprons.

Prior to the arrival of the first guests, the staff was trained over several days, while the train was stabled in Missoula. We had several opportunities to “polish” our crew by preparing meals for friends and Montana Rail Link staff. Finally, with much anticipation and excitement, we deadheaded the train to Paradise to greet our first guests who were arriving by motorcoach after a three-day tour of Glacier National Park.

The first course of Whitefish caviar, blinis and wild ramps was served with aplomb and met with raves. Next up was the piping hot consommé, carefully ladled into small consommé cups and topped with shaved morels. We had planned for (almost) everything! What I had not anticipated was track speed along the winding Clark Fork River and the thin, clear soup sloshing out of the bowls onto the servers’ trays.

Normally, I left the radio communications to our conductor and the train crew, but there was no time for railroad protocol. I grabbed my radio and hollered into it, “Engine 391, please slow down! Our soup is spilling.”  Luckily, we were able to salvage the soup that night, but because the menus had been printed for the entire season, we couldn’t modify the menu. Instead each Friday night, just before the procession of the second course, our conductor would radio the engine to request “Marcia’s soup speed, please,” which was 35 MPH. My rabbit stock and I were the laughingstock of train crews for many years thereafter.

You won’t need soup speed with thick and savory Three Sisters Soup. It’s a traditional Native American recipe that refers to the three main crops of many indigenous tribes: corn, squash and beans. These three plants were planted close together and, like sisters, aided one another as they matured. It is often served in Indigenous communities on Thanksgiving.

Whether or not our sisters can join us, this just might be a good year to add it to our menus. 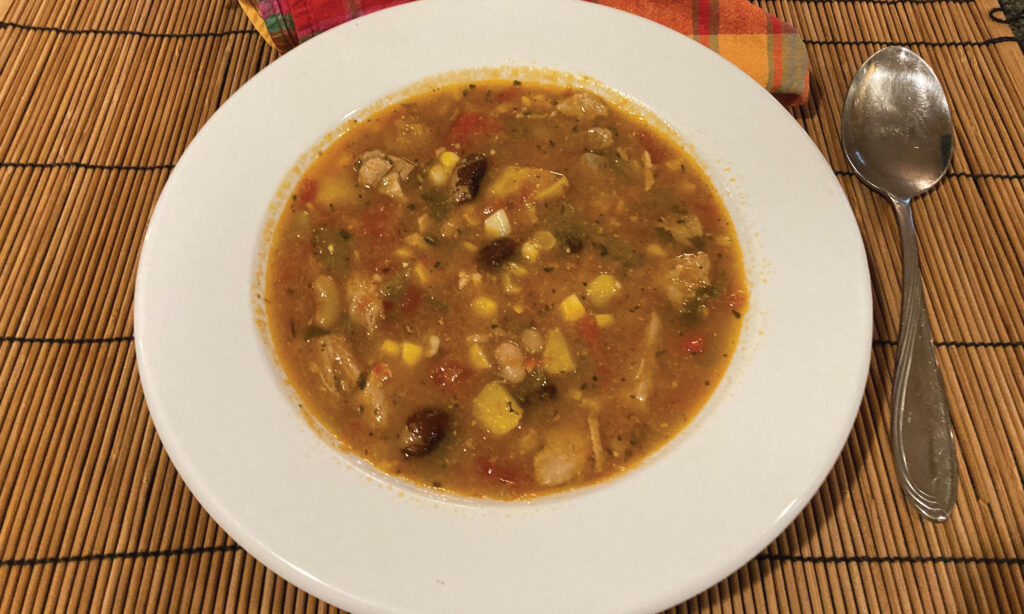 Omit the pork for the vegetarian version. Instead, toss the onion with the cumin, salt and pepper, and saute. Substitute chicken stock with vegetable stock. Recipes call for canned beans or a variety of dry legumes, soaked overnight and added with stock and squash

Season pork with cumin, salt and pepper. Heat oil in a Dutch oven or large heavy-bottomed saucepan over medium-high heat. Add pork, in two batches and cook, stirring so it browns evenly, until browned on all sides, 6-7 minutes. Transfer pork to a platter and set aside.

Add onion to pan and sauté, stirring occasionally, until soft, 5 to 7 minutes. Add peppers, carrots, celery and garlic and sauté for another 4-5 minutes.

Return pork to pan, along with stock and squash, and bring to a boil. Reduce heat to medium-low and simmer, covered, for about an hour.

Add canned beans, tomatoes, corn and chiles, and cook, uncovered, over medium-low heat until pork is tender (about 40 minutes). Add cilantro and season to taste with salt and pepper.