Though I’ve been feeling a bit cooped up, I think I can see spring from my backdoor, which means we’re only a month or so away from my favorite holiday, Easter, filled with glorious trappings of peeps and peeps. The peeps of chicks will be arriving at the CO-OP Country Store on March 24th.  Once they arrive, I’ll plan daily errands that include an excuse to stop there. Surely I am not the only one who’s a peep stalker, though sometimes I do feel like I’m being judged as I lean into the galvanized steel tubs snapping photos or shooting video to record those adorable little “cheep-cheep” sounds. Seriously, who can resist all those little fuzzy creatures?

When I was a kid, local grocery stores would give away little pastel-dyed chicks at Easter time. Why anyone thought that was a good idea is beyond me, because parental approval was not required. Only one time did I come home with the adorable little colored balls of fuzz, and my father was not pleased. He scowled at them for the entire Easter weekend, and a couple days later we drove in silence to a friend’s place in the country where I relinquished my little flock. I know he felt a little guilty as I was rewarded with an A&W root beer float on the way home.

I love buying fresh eggs from backyard farmers. A couple years ago, my egg supplier was culling their clutch and since Ryanne had been hankering for hens, we took a drive out to meet the source of my supply. It didn’t take long to suck her in, and while she was not yet coop-ready in Moscow, Ryanne and each of her boys chose a favorite, making plans to return for them after they prepared a suitable home. Before the Easter weekend was up and we’d polished off the last deviled egg, elaborate plans were drawn for the henhouse, which my skilled son-in-law would work on over the next few weeks.

I’ve never claimed patience as a virtue, and apparently neither did my oldest offspring because in less than a week’s time they had pounded, painted and hammered a home that any hen would envy. Though their schedule didn’t allow time for a trip to Sandpoint, they were chicken-ready, and the young grandsons were pleading for their flock. I’m just a girl who can’t say no, and by the following weekend, the white leather backseat of my Kia was filled with three hen-filled cat carriers. I headed south with my live cargo, the first few miles filled with wing-flapping, nervous clucking travelers. Normally my backseat is filled with grandchildren, and the antidote for their restlessness is song. It worked for the hens too, and soon they were clucking and cooing along with the most chicken appropriate songs I could think of, “Farmer in the Dell” and “Old McDonald.” I only felt ridiculous when I caught a glimpse of myself in the rearview mirror.

Ryanne thinks I’m a terrible driver, and bemoans what she refers to as my inconsistent two-speed driving technique.  “Mom,” she admonishes, “you either drive too fast or too slow.” The hens however, thought I was a fine chauffeur, and two of them rewarded my singing-driving performance by laying eggs en route. The girls settled right into their new home, and two years and a clutch of little chicks later, they still rule the roost and keep the egg cartons filled.

Whether you build your own simple coop or purchase a fifteen hundred dollar model from William-Sonoma, it’s evident that urban chicken farming continues to gain in popularity. In the past five years, even large cities have revamped regulations to address backyard hen houses. Our local ordinances vary; in Sandpoint you can have hens and even roosters. The caveat of owning roosters? If they crow and your neighbors complain, you can be cited for disturbing the peace. Roosters are not allowed in Ponderay, and though you can have chickens, they cannot roam free. If you live in Kootenai, you can have up to ten chickens but you need a minimum of at least an acre.

Whether you choose to raise your own chickens and eggs for health, economic or humanitarian reasons, there’s something pretty wonderful about gathering fresh eggs each morning. If this is a new endeavor that sounds good, you’ve got a month to get the compound ready. You’ll find chicks in many adorable (and natural) colors. 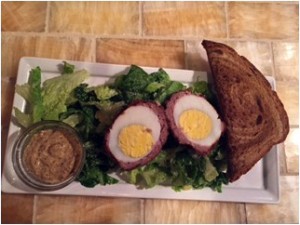 Scotch eggs. I hear they go well with a glass of Scotch.

These savory sausage-wrapped eggs are popular British and Irish pub food. Add a salad and rye bread, and mustard or chutney for a perfect brunch, lunch or picnic option

•Vegetable oil for deep-frying the eggs

•Divide the mixture into 4 equal portions, and flatten each portion into a thin round.

•Enclose each hard-boiled egg completely in one of the sausage rounds, patting the sausage into place.

•Dredge the sausage-coated eggs in the flour, shaking off the excess, dip them in the raw eggs, letting the excess drip off, and roll them gently in the bread crumbs, coating well.

•In a deep fryer (or heavy sauce pan), heat 2 1/2 inches of the oil to 350°F. and fry the eggs for 10 minutes, 2 at a time, turning them and transferring them to paper towels to drain with a slotted spoon as they are done.