Do you long for the days of swords, suits of armor and general medieval ballyhoo? This Saturday, the Sandpoint Library will be hosting a demonstration featuring several medieval societies hailing from across the region.

From 10 a.m. to 4 p.m. at the Sandpoint Library, knights and ladies of all stripes will descend in the name of everything medieval. 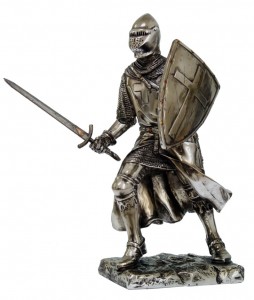 Representatives will put on demonstrations of armored combat, forging metals, arts and crafts and other displays of Renaissance material. The Sandpoint chapter of the Society for Creative Anachronism (called the Shire of Pendale) will be joined by Spokane’s Adrian Empire and the Spokane Renaissance Faire, as well as Nine Mile Falls’ group Northwest Renaissance Faire.

“The local group is called the Shire of Pendale,” said Weezil Samter, the Library liason (also known as His Lordship Weezil). “They were interested in putting together a smaller event. I had already done various activities with the children’s group at the Library, and we thought it would be cool to do a demonstration and turn it into a medieval day.”

His Lordship Weezil hopes to have full armored combat and a tournament of staged fighting techniques.

There will also be a horseshoer’s forge on site, operated with a hand blower.

“The hand blower forge is actually post-medieval,” said His Lordship Weezil. “They used forges with bellows, but a lot of the principals are the same.”

Denizens of the arts and crafts of the Middle Ages will also be on hand offering examples of spinning yarn, weaving, portable looms and Viking style weaving.

The festivies are free and open for all ages. Contact the Sandpoint Library at 263-6930 for more info.

Who says chivalry is dead?