The day Confucius went to the United Nations

The Universal Declaration of Human Rights proclaims that “all human beings are born free and equal in dignity and rights,” and that they have “the right to life, liberty and security of person.”  Slavery, torture and other inhumane treatment are strictly proscribed. 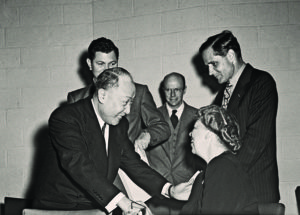 Some critics of the Declaration claim that it is far too Eurocentric, and it does not do justice to African and Asian ideas of human flourishing. These detractors may be unaware of the common moral ground shared by ancient cultures.

As we celebrate United Nation’s Day on October 24, I want to acknowledge the contributions of Chinese philosopher P. C. Chang. He has been identified as “the towering intellect” of the committee that sent the final draft of the Declaration to the General Assembly in 1948.

Chang received a Ph.D. from Columbia University, became President of Nankai University and established himself as a major philosopher of education. Chang, more than any other representative on the drafting committee, stressed the importance of combining ethics and rights in the Declaration.

Far too many people exercise their rights without much moral consideration or concern for others. Our founding thinkers believed that personal liberty without virtue becomes license to do whatever a person wants, and we certainly see the negative effects of this self-indulgence in today’s society. Confucius would say that we have no sense of shame.

Ancient Greek and Chinese philosophy began with the same assumption that people are basically social beings, and that they thrive only when they develop virtues such as courage, justice and benevolence.  The Greeks and Chinese believed that we learn virtues from models in our communities: parents, teachers, saints and sages.

Chang proposed that the Declaration’s first article should refer to the Confucian virtue ren, which is variously translated as humanness, benevolence or love. The drafting committee chose instead the English word “conscience,” universally-shared moral knowledge, and they also added “the spirit of brotherhood” to emphasize the social relations that Chang thought were so important.

Chang’s role in drafting all 30 articles was profound. He played a mediating role in Article 18, convincing the Saudis not to press their objections against the right to change one’s religion. The issue about Muslims converting to other religions is still a contentious one for conservative Muslims.

In the discussion of Article 29, Chang convinced the delegates to balance individual rights with duties to the community. Chang argued that only by putting aside “selfish gains” and devoting themselves to their communities could humans “increase their moral stature.”  This is a fundamental principle of Confucian ethics.

It is significant to note that the Confucian philosopher Mencius was also prescient in insisting that the virtuous person cares for animals as well as human beings. In his praise for King Xuan, Mencius said that his deep feeling for the suffering of animals was enough to qualify him as king. “This is how ren works,” Mencius said, because it meant that the king had the capacity to care for his people.

P. C. Chang described Confucian ethics as the “art of living.”  The Chinese classic Book of Poetry describes the development of the virtuous person as the polishing an uncut gem, and even today we say that the people we admire are real “gems.” Just like expert craftsmen, virtuous people create their moral lives in unique and beautiful ways.

In his discussion of the development of the virtues, Mencius switches from stones to plants. He believed that we all have virtue sprouts that must be carefully nourished and tended. If they are not, then the virtues shrivel up and die, just as they have done in our contemporary culture.

Some have wondered why P. C. Chang did not press his issues harder to leave no doubt that multi-cultural values were recognized, but he may have learned Farmer Song’s lesson. Song was so eager for his rice to grow that he went out at night and tugged on the shoots with disastrous results.

As we celebrate the 70th anniversary of the Declaration of Human Rights on Dec. 10, let us all be grateful for the contributions of P. C. Chang, world citizen and Confucian philosopher par excellence, who insisted that human rights have no meaning without a solid moral framework.