Megafauna that ate your family

If that subhed doesn’t catch your attention, I have no idea what will. Earth has hosted countless giant predators, from the Tyrannosaurus to the Megalodon, a shark that made Bruce, the shark from Jaws, look like a bumbling koi. Very few members of these colossal predators ever crossed paths with our ancestors, however — and none of them survived to the present day. 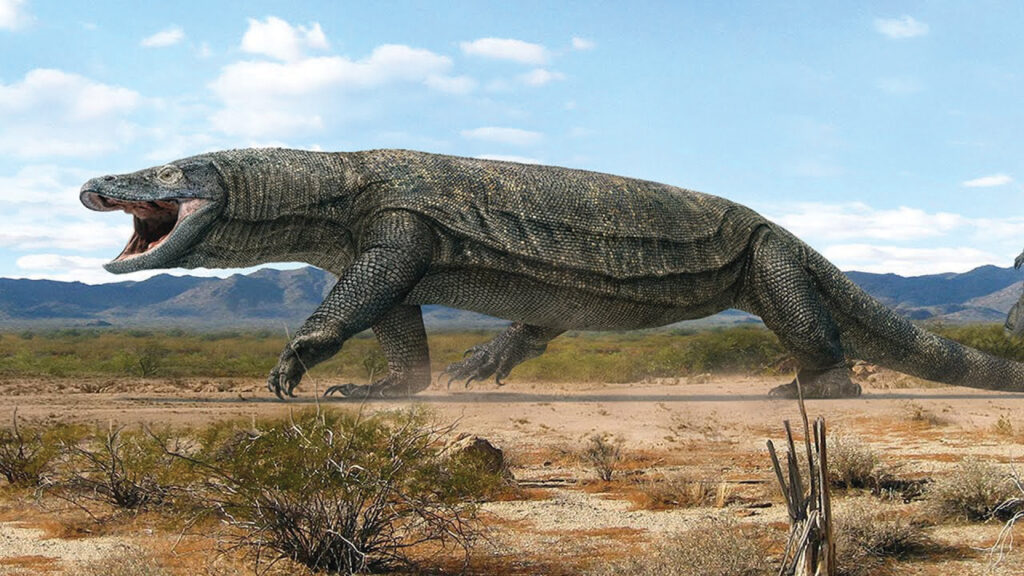 Perhaps I should have titled this article: “Your Family Ate The Megafauna.” Ancient humans were believed to have first crossed from Asia to North America around 30,000 years ago, utilizing the Bering Land Bridge. Earth was in a glaciation period around this time, leading to lower sea levels and higher sea ice levels, which made it possible for curious and migratory humans to travel from Asia to North America by foot, though this journey must have been fraught with unimaginable terrors— among them: birds. Aptly named terror birds (scientific name: Titanis) were a species of flightless birds that inhabited North and South America for millions of years before going extinct around 15,000 years ago — or so we currently believe.

Science changes, folks. It’s part of the process. Terror birds stood around eight feet tall and weighed as much as 350 pounds — about half the weight of a vending machine — but with a giant beak for tearing flesh from prey. Given the size of their massive beaks and shape of their skulls, it was believed that terror birds pummeled prey into submission and, ultimately, death.

Luckily for most of our ancestors, the terror bird was going extinct because of other, far more terrifying predators around the same time the first humans were setting foot into what is now Canada and the United States. You may find it interesting, albeit unrelated, that the terror bird was going extinct at the same time the great Missoula floods were carving out Lake Pend Oreille. Stop and think about that for a second: all it took for you to get your boat out on the water and enjoy a nice day on the lake was the extinction of an entire species of killer avian.

Unless you have an indigenous American lineage (including Native American and Mexican ancestors), it’s likely that your ancestors never encountered any entry on North America’s utterly terrifying roster of megafauna. American lions (Panthera atrox), felids that grew up to 600 pounds, are believed to have stalked some humans’ ancestors. Smilodons, better known as saber-toothed cats, competed with our ancestors in the Americas and Eurasia, with some species capable of reaching up to 1,000 pounds.

If your genetic lineage is primarily Caucasian, your ancestors likely faced off with some pretty nasty megafauna in Eurasia, including the aforementioned Smilodon. Many people’s ancestors also must have encountered the aptly named dire wolf (Canis dirus), huge wolves that could grow up to 150 pounds. Some current dog breeds, such as the English and Tibetan mastiffs, great Dane and St. Bernard can easily exceed these weights, but you also don’t have to compete with packs of feral great Danes trying to disembowel you while you shop for quinoa at the grocery store.

Furthermore, one of the freakiest ancient predators of Eurasia was the cave hyena (Crocuta crocuta spelaea), which was discovered to have hoarded more mammalian bones in their caves than any other ice age predator. Remember the best song from The Lion King? Yeah, that was pretty accurate for the cave hyena. We know ancient humans crossed paths with these psychopaths, because there are 20,000-year-old cave drawings of cave hyenas.

It just wouldn’t be a successful article about terrifying animals if we didn’t talk about Earth’s crown jewel of ferocious fauna: Australia. Humans have lived in Australia for at least 40,000 years, but the Australians you’re probably thinking about have only been there since 1788. This means a very, very small percentage of the modern human population has ancestors that survived the world’s most killer continent on hard mode.

Among Australia’s insane number of man-eating megafauna was the Wonambi, a 30-foot snake that ambushed prey and crushed it to death via constriction, like a boa constrictor, which can exert up to 12 pounds of pressure per square inch — more than enough to rupture blood vessels. Keep in mind, the Wonambi was three times the size of a boa. Yikes!

Megalania was likely the closest thing to a dinosaur ancient Australians ever faced. A massive monitor lizard that grew up to 23 feet long and weighed 1,300 pounds. Komodo dragons, though not directly related to Megalania, are the closest thing we can envision to these prehistoric titans, and Komodos only get up to about nine feet long and 200 pounds at their largest.

Somehow, the first Australians are believed to have contributed to the extinction of Megalania, by hunting or out-competing it for food sources, though we aren’t sure on the details.

Unfortunately for present-day humanity, we will never know what a Megalania steak tastes like. It must have been pretty vital to their diet if ancient humans cleared them out like toilet paper at the grocery store. Stay curious, 7B.