New kids on the bridge

After 12 years at the Cedar Street Bistro, Tim and Manuela Frazier are bidding farewell to the days of crafting crepes, sandwiches, gelato and beyond from scratch. 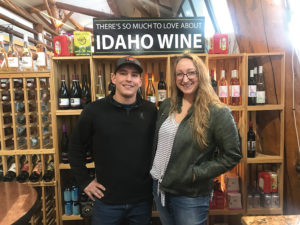 Tyler Francis and Taylar Doolittle, new owners of the Cedar Street Bistro and Wine Bar — which they will soon rename.
Photo by Lyndsie Kiebert.

Though the Fraziers will continue to own and operate the Christmas and T-shirt shops next to the bistro, Manuela said she will miss the regular interaction with customers who visit from faraway places each summer.

As of March 1, the Fraziers officially sold the business to Tyler Francis and Taylar Doolittle — a young couple excited to contribute to the bustling Cedar Street Bridge. Both have experience in the food service industry, having cooked and served tables at several establishments. The duo met while working at Elkins Resort in Priest Lake.

Under the new ownership, the Cedar Street Bistro will adopt a new name: Taysty’s. It’s a combination of the owners’ names, branding the restaurant both “Tay’s” and “Ty’s.”

Aside from the moniker, changes at the restaurant will be gradual, Doolittle said. They plan to serve the same menu for the time being, and will soon add smoked meats to the mix, thanks to a commercial smoker slated to be installed just outside the kitchen. Doolittle and Francis plan to keep all of the bistro’s current staff.

“They are trained up and ready to go,” Francis said.

Other changes will include lengthened hours, more salad options, mocktails and game nights.

“We want to be mindful of our local loves that are going to have a hard [time] with change,” Doolittle said. “There will be fun changes to come, but nothing too extravagant at first.”

The sale of the Cedar Street Bistro also includes the connected wine bar. Francis and Doolittle said they intend to offer some tapas, help educate diners about what wine might pair best with their meal and expand their organic wine offerings.

“Not just one or two bottles — I mean that sincerely,” Doolittle said. “We want to have a great variety [of organic wines] and a selection you can’t go find elsewhere in Sandpoint.”

Both acknowledged that business ownership is a new challenge when compared to working in the restaurant industry. Francis described the new venture as “a whole other ball game.” Nevertheless, both said they are excited to start interacting with customers and gathering feedback.