The Roots of Poverty:

What perpetuates it, and how can we change it?

Editor’s note: This is the second article in a series on poverty in Bonner County. It was made possible in part by a grant from the Idaho Media Initiative of Boise State University. Learn more about IMI at https://sps.boisestate.edu/imi/

Have you ever had one of those days where new tasks and frustrations seem to pile atop one another? You feel like you’re stumbling from one crisis into another. The second one problem is solved, three more rise to take its place like your own personal hydra.

For many living within poverty, that feeling is a daily reality. 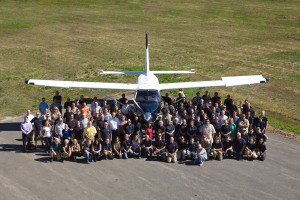 Idaho PTECH is preparing students to transition directly into employment for companies like Quest Aircraft, pictured above with their 100th plane. Photo courtesy of Quest Aircraft.

At least, that’s what Shirley Paulison of Community Action Partnership has experienced. A social worker who helps low-income families to secure financial assistance or build employment skills, Paulison understands all too well how the “tyranny of the moment”—the stress and panic that comes with managing crises—can hold her clients in a limbo. They’re so busy dealing with the problems of the now, they can’t devote energy to improving their future prospects.

“We found they were just too stressed out to put another thing on their schedule,” Paulison said.

The tyranny of the moment is just one of many reasons why poverty is such a difficult social problem to attack at the roots. Just as those below the poverty line find few options to improve their conditions while maintaining their day-to-day lives, social workers and economic experts lack any silver-bullet solution. Even so, hope is far from lost. Local educators and planners have some fresh ideas they hope will connect new generations of the working poor into a living wage.

Paulison and her colleagues at Community Action Partnership work on a daily basis with families and individuals seeking to break the cycle of generational poverty. For people with few resources and even less spare time, however, that’s a tall order. Beyond the tyranny of the moment that leaves people paralyzed in the present, Paulison said a counter-intuitive welfare system actually disincentivizes people to seek higher wages. Paulison recalled one former client who begged her boss not to give her her a $1 raise—an increase of just $160 a month—because it would disqualify her for hundreds in welfare income.

“There needs to not be that cliff in front of [recipients],” said Paulison. “When you make a little more money, you should lose that much a month in your benefits.”

The other problem is as much a cultural problem as an economic one. Historically poor families instill different values in new generations than middle class families, Paulison said. Behaviors tend to emphasize in-the-moment survival and reliance on relationships over investment in the future. And just as most middle class individuals would feel uncomfortable at the dinner table of a billionaire, so too do poor families experience class-based culture shock, often prompting them to stick with what they know.

“Everywhere you go, you’re hit with the hidden rules of the middle class,” Paulison said. “Workplaces have hidden middle class rules. Schools have them. Even churches have them.”

Cultural differences also contribute to the problem of young Idahoans ending their education after high school, Paulison said. While some poor parents urge their children to pursue higher education, others don’t encourage it. And once again, the tyranny of the moment plays its role, demanding that individuals prioritize work and childcare over college classes.

“For the [working poor] that choose to try college, it’s very difficult because of that stress factor,” Paulison said.

Idaho’s dismal college attendance rates have been a problem for years, with the state ranking at the bottom of the nation in graduating high schoolers who go on to earn a college degree or professional certification.

“I think you have families that don’t understand the ‘why,’” said Karl Dye, director of industry and community relations at Idaho PTECH. “They’re struggling with the day-to-day—keeping the lights on and that sort of thing.”

“We’re starting to find in PTECH that most important way you can help someone get past high school is their support system,” Dye said.

Dye and PTECH Executive Director Alan Millar say they’re greeted with shock when they tell people that out of 10 Idaho students, eight will finish high school, four will go to college and only one will graduate college. What’s more, the majority of undergraduate degrees obtained in the state often have  limited applications. The number one degree turned out by Idaho colleges is in psychology, Millar said.

The problem, as Millar and Dye see it, is that Idaho high school students aren’t getting the information they need. They see four-year degree programs as their only option when a two-year or 18-month training scenario might make more sense. The result is a workforce unequipped to handle the needs of employers.

“One of our theories is kids have incomplete info about what their choices are,” Millar said.

Idaho PTECH aims to address those problems at the source. The program revises the traditional K-12 education model with two additional grades. These years are spent receiving hands-on training and classes, ultimately readying them to begin working a job immediately in growing industries. Program officials are essentially a middleman between education institutions and employers.

As students advance through the program, they regularly speak with advisers based out of Portland, Ore. These professionals help them transform vague aspirations into grounded goals. For Millar, this is one of PTECH’s most important innovations, a reflection of the idea that a solid support system can be the difference between success and failure.

“This remote coaching model is something every kid in Idaho could use,” he said. “The vast majority are not getting that kind of support.”

PTECH offers programs in aviation manufacturing, health care and technology, with a new program in retail management expected to launch soon. The idea is to get students the skills they need for a successful career straight out of the gate. More than 20 industry partners are already on board, and Dye is in talks with many more.

“No one has told us no,” Dye said. “Their thinking is usually, ‘Help us understand what you need and let’s get more kids qualified for these jobs.’”

Millar and Dye agree that there’s no easy fix for poverty in North Idaho. However, they believe a system that can more readily address the needs of both students and employers is a step in the right direction. If it works, the tyranny of the moment may not define the potential of a lifetime for many future Idaho workers.

In our next feature on poverty in Idaho, we’ll profile some of the many local organizations that help make life manageable for people under the poverty line.