Halloween at the Hive

Who can forget the Hive’s Halloween Bash last year when Sir Mix-A-Lot packed the house to capacity? Who knew so many people in Sandpoint liked big butts? 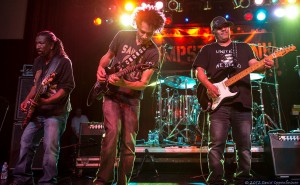 For their second annual Halloween Bash this week, the Hive will offer a tried and tested follow up to last year’s big hit show; funk. And not just any funk. Dumpstaphunk.

“Last year, having Sir Mix-A-Lot was great but he only performed about an hour,” said Rob Smith, general manager for the Hive. “Dumpstaphunk performs a multi-hour show and they’re going to bring something special to this show.”

Dumpstaphunk was voted New Orleans’ best funk band by Offbeat Magazine and Gambit Weekly in 2007, and has played some of the nation’s largest music festivals such as Bonnaroo, Voodoo Fest, 10,000 Lakes and High Sierra.

“They’re friends with [Hive owner] Jeff Grady and they love coming out here, love this venue,” said Smith. “We’re aiming to have a dance party, and funk always brings it.”

The Halloween Bash is Saturday, Oct. 31 at the Hive in downtown Sandpoint. Doors will open at 8 p.m. and the show begins at 9 p.m. Tickets are $25 general admission, and $75 buys you a V.I.P. ticket.

“The V.I.P. booth is the best seat in the house,” said Smith. “You get to be surrounded by all your friends, and you can go down and dance any time you like.”

For those of you out there who haven’t hit that magical age of 21 when the world opens like a beer-soaked oyster, the Hive has a special pre-Halloween Bash on Friday, Oct. 30 called the Monster Bash 20-and-Under Show.

Featuring Jackson Hole-based band Head to Head and local duo Champagne Wolfgang, the Monster Mash is a chance for those under 21 to hang out in a safe, alcohol-free environment and dance to some good tunes.

“We want to have two or three concerts a year where families can come out and bring the kids,” said Smith. “It’s something we’re working towards.”

Head to Head is a duo of drummers who mix electronic percussive elements with acoustic sound, then add a full light show to the mix. Tickets are available for $10 each.

Check out www.livefromthehive.com for more information about upcoming shows at the Hive.