As a civilization we have spent nearly the past two years getting our butts kicked by something too small to see with the naked eye. SARS-CoV-2 is tiny, but how tiny? We know that it attacks and assimilates cells, but how?

To really understand the scope of things too small to see, we need to scale them up. Let’s start with something we can see: a single strand of our hair. Normally, our hair has a diameter of about 50 micrometers and is one of the smallest, thinnest objects we can see with the naked eye. Let’s scale that up to the size of your average freight train, like the one that made you late coming back from lunch earlier this week. Scaled up, that gives your strand of hair a 10-foot, six-inch width and it can stretch lengthwise for up to two miles.

A single grain of salt, normally around 60 micrometers, would be slightly wider than the freight train but not nearly as long — about the size of a Chinook helicopter next to the strand of mega-hair. At 21 cubic meters, this block of salt would weigh more than 102,000 pounds. As a bonus fact, it would take you almost 50,000 years to eat that much salt, based on the average American’s yearly salt consumption.

Beside that helicopter-sized lump of salt, you would be able to see one of our white blood cells — our body’s last line of defense against infection. Normally around 25 micrometers in diameter, once scaled up into the world of supersized particles, it would be about the size of a four-person sedan. On our list of small things, this is the last item we would be able to see with our naked eye. Anything smaller than this four-person sedan is essentially invisible without a little bit of help. 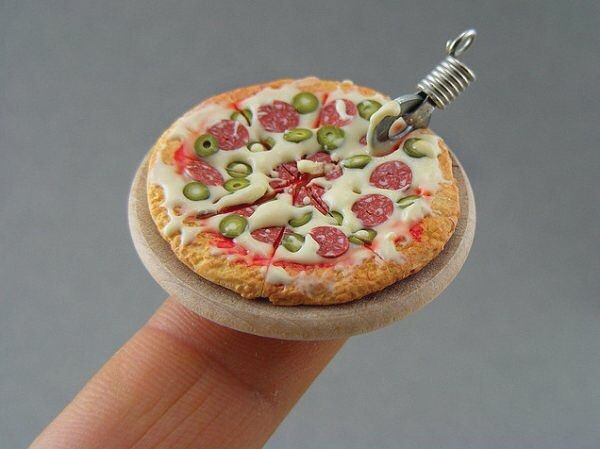 Red blood cells, responsible for giving your life-juice a horrifying scarlet color, are normally about eight micrometers and would be about the size of an average adult human in the upscaled world. Four of them could squeeze into the sedan-sized white blood cell, though this interaction inside of your body would be a nightmarish experience and you’d very likely need to see some kind of specialist and end up being the subject in an awesome medical journal.

Now we start getting to some of the really small stuff. Imagine those four human-sized blood cells shooting some hoops at the local park. The ball they would be hurling back and forth is a particle of wildfire smoke — the cause of our hazy summer. Normally, these particles are around 2.5 micrometers, so around the size of a yoga ball to our person-sized blood cells. A single one of these particles isn’t enough to do any harm, but a single particle doesn’t make a cloud of smoke. You have to figure that each particle was removed from the tree by fire. If the entire tree burns up, its entire weight is released as particulate matter into the air. On average, a single acre of pine trees contains 198,000 pounds of wood. The Trestle Creek Complex has burned more than 3,400 acres as of the time of this writing, which would mean somewhere around 600 million pounds of wood has burned in that fire alone, converting it into smoke particles that we’ve been steadily breathing in for weeks.

The Bootleg fire in Oregon, meanwhile, exceeded 400,000 acres burned. That would be more than 79 billion pounds of wood converted into particulate matter. Trying to imagine that in our scaled-up world? I’ll let you do the calculation on that one.

Smaller than smoke particles is a single instance of SARS-CoV-2, the virus responsible for COVID-19. This virus ranges anywhere from 0.1 to 0.5 micrometers. In big-world, that would be anything from the size of a baseball to a basketball. The virus still isn’t small enough to simply slip into your cells. Instead, it stabs healthy cells it contacts with little spikes and begins to inject its genetic code into your cell, reprogramming it to start reproducing more instances of the virus — similar to a Facehugger from the Alien franchise.

Ironically, the virus’ reproduction method isn’t what causes the onset of symptoms associated with COVID-19, it’s the response of your sedan-sized white blood cells attacking the infected cells. The coronavirus is basically a baby-sized hostage taker, and your body’s response to stop it is to ram it with as many 1992 Ford Crown Vics as possible, inevitably causing a massive pileup and huge collateral damage to the surrounding area. In our scaled-up world, that’s not just the basketball court your four red blood cells were playing on, it’s the entire city erupting into chaos — the city, of course, representing your respiratory tract to scale.

Smaller than SARS-CoV-2 is the Zika virus, which is about 50 nanometers, or about 1% of the size of the largest coronavirus. Scaled up, it would be a flea, maybe as large as an ant or a fly.

Smallest of all is the atom, coming in at 0.1 nanometer in diameter. In the scaled-up world, it would still be too small to see without some kind of microscope — coming in around the size of SARS-CoV-2 in the regular world.