The glorious return of SummerFest

Just when Sandpoint SummerFest organizers thought they were out, the community pulled them back in. 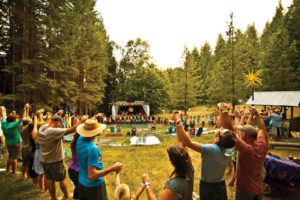 A ring of SummerFesters take a moment to celebrate good times. Courtesy Facebook.

After festivities wrapped up last year, they believed the sun was setting on SummerFest. But fans of the weekend music festival had other ideas. Donations and sponsors for the event began rolling in to the surprise of organizers like Steve Holt and John Edwards. What once looked like a community festival that was on its last legs is now stronger than ever, they said.

“We really feel like the local community has stepped up and said that SummerFest needs to continue,” Holt said.

The support began rolling in shortly after events wrapped up last year. Before long, Holt said initial sponsors had already stepped up, and more than $1,000 in individual donations quickly poured in. That list of sponsors only grew as time went on. Thanks to efforts by people like Robb Talbott of Mattox Farm Productions, SummerFest worked itself into an increasingly secure position.

“We’re looking at almost covering the cost of the show with sponsors, so it really should be a fundraiser this year,” Edwards said.

“It’s going to be a banger year,” Edwards said.

Edwards said there’s something to look forward to from every performer booked this year. Afrolicious, for example, has established itself as one of the hottest party bands in the San Francisco area, bringing club beats and musical textures that are sure to keep people moving.

“They’ve been kind of house partying down there for 10 years now,” Edwards said “… I think they’re going to be a great dance party.”

Likewise, Sepiatonic brings more than just great music to the mix. An off-shoot of March Fourth, which won many local fans across a pair of Sandpoint performances, the vaudeville-inspired band brings dancers together with electronic musicians for an unforgettable night of dance set to musical stylings with Balkan beats, hip hop and funk influences, among others.

“They are mind-blowing — so much fun,” Edwards said.

Beyond the music, SummerFest attendees can look forward to enjoying yoga, movement and music classes, kids crafts and events, creative and educational opportunities, the Tim Parnow Memorial Mountain Bike Ride and an amazing selection of food and drinks.

As always, there’s more to SummerFest beyond a great time. The proceeds from the event support the Construction Basics Initiative, which teaches under-served and at-risk students practical construction skills on projects like bus shelters that benefit the community.