Nerds of the world, unite!

It’s safe to say no one realized just how nerdy Sandpoint really is a year ago.

In August 2015, Sandemonium’s debut year made the town’s significant geek cred abundantly clear. The single-day celebration of sci-fi, fantasy, gaming, comics and other nerdy interests attracted an estimated 500 attendees to the Sandpoint library throughout the day—about three times the planners’ most optimistic expectations.

With a proven audience in the area, the Sandemonium steering committee faced a new challenge this year: how to keep the spirit of a small community convention alive while making each element a little bigger and better.

“We tried to bring back everything that worked from last year while improving on some of the things that maybe didn’t work as well,” said steering committee member Sarah Alli Brotherton. “I think we have a whole slate of awesome panelists and there’s something for everyone to enjoy.” 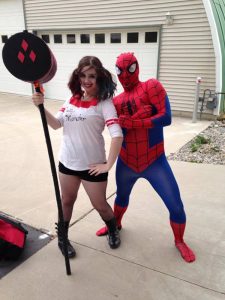 Community events like Sandemonium are inspired by the larger conventions across the country, particularly the famous San Diego Comic-Con. Once limited to enthusiasts, these conventions have grown with the popularization of nerd culture and now play host to the biggest filmmakers, actors, writers and artists in the world. In response, thousands of smaller community conventions sprang up around the world to provide a centralized community for local fan cultures. Sandemonium is no exception.

“I am excited to see all of these great creative people coming together in one space,” said steering committee member Kevin Penelerick. “There are so many cool exhibitors bringing everything from indie-published books, comics, artwork, games, and not to mention the panel line-up of gaming, live podcasting, an improv show and so much more! It’s going to be a great time for attendees!”

In adapting the event for its second year, the first step was to find a new venue. While the Sandpoint library served the convention well in its first year, the unexpectedly large turnout proved a challenge for the building foyer, where most of the large events like the cosplay contest were held. What’s more, there was no space for vendors in the main building, meaning they had to set up in an area separated from the bulk of activities. That led to less foot traffic and, in all likelihood, fewer sales.

The steering committee found the perfect new location in the Forrest M. Bird Charter High School. The classrooms, outfitted with plenty of seating and equipment for presentations, are perfect for the robust schedule of panels, with topics ranging from chainmail construction to self-publishing. Likewise, the open design of the main hall is an ideal space for vendors to attract attendees hitting events at the main stage or checking out new panels.

Like the larger conventions, community micro-cons feature entertainment and attractions in line with fan culture. Perhaps the defining image is cosplay, a hobby where people dress up in the costumes and weapons of their favorite comic, anime, movie or book characters. Sandemonium is no different, and cosplayers of all ages will be able to participate in contests that reward the best costumes of the day.

Gamers also have plenty to look forward to at Sandemonium. Local business Another World will be hosting pen and paper or tabletop options, while Nintendo’s hit fighting game, “Super Smash Bros.,” will be available for open gaming sessions. “Smash Bros.” tournaments are scheduled for two-player-per-team games at 11 a.m., single players at 1 p.m. and casual players at 2:30 p.m. On Friday, Aug. 26, “Pokemon Go” players can also check out a downtown crawl for everyone’s favorite pocket monsters. Players will gather at Another World,  417 Church St., starting around 7 p.m. before embarking on the hunt for more Pokemon at 7:30 p.m.

One of the more exciting additions to Sandemonium’s second year is a partnership with Pants Pending Studios. A media group of geek-friendly podcasts, the Pants Pending team has a series of improv shows planned. Members will also record a live podcast throughout the day and host panels on how to start your own podcast.

Coordinating and planning the convention’s many activities and events is no easy task. Sandemonium is shaped primarily through a volunteer steering committee of local folks with a passion for the geekier side of life. In addition to Brotherton and Penelerick, the committee includes Marcy Timblin, Tarra Millheim, Drew Quesnell and yours truly, Cameron Rasmusson. Local businesses and organizations including the East Bonner County Library District, the Sandpoint Reader, Grivante Press and Another World also contribute resources and personnel to make the event happen.

“I wanted to volunteer because I have been involved in the comic book world most of my life and have been to cons as both a guest and an exhibitor, but I’d never helped put one together,” said Penelerick. “Getting to be a part of the behind-the-scenes action has given me much greater respect for everything that needs to be done to make a con a great con. There has been so much positive teamwork and sharing involved in putting this together that I am excited to see it come to fruition. It has been a pleasure to be part of such a great team.”

The convention is only possible through the enthusiastic support of vendors and volunteers. Vendors often travel from many miles away, supporting the convention through fees and personal know-how. And since everything from overseeing the gaming room to checking in costume weaponry requires manpower, Sandemonium relies on volunteers to keep the event an orderly, safe and friendly place for all ages.

“I am enjoying my role and ecstatic about the level of commitment and dedication [the steering committee] and our volunteers have in pushing the event to be ever better,” said Timblin.

Sandemonium takes place Saturday, Aug. 27, from 10 a.m.-5 p.m. at Forrest M. Bird Charter High School. Tickets cost $2, with kids age 5 or younger admitted for free. For a full schedule of events and more information, check out the website at www. sandemonium7b.com or visit the Facebook page at www.facebook.com/sdptsandemonium.