Loaf and Ladles takes on Bottle Bay Resort this summer

When it comes to dining atmosphere, it’s hard to beat a beautiful spot like Bottle Bay. 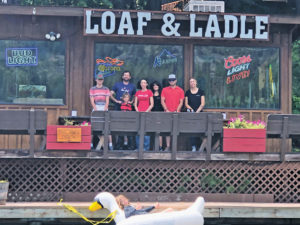 The crew at Loaf and Ladle at Bottle Bay Resort takes a rare break to pose on the deck.

When Michael and Sarah Williams, owners of the popular Sandpoint restaurant Loaf and Ladle, decided earlier this year to move their operations out of town, there were understandably a few foodies who lamented the change. But, with the opening of their new location at Bottle Bay Resort, it’s clear that the restaurateurs with a mission statement of “simple, honest, good” would be carrying that tradition with them.

“When we took over the lease at Neighborhood Pub, there were still two years left on the five-year lease,” said Michael, who doubles as head chef. “When we went into it, we knew we were going to evaluate at the end of those two years.”

Having both spent years working for seasonal organizations, including Schweitzer Mountain Resort, Michael and Sarah found they were ready for a change after two years of working the daily grind.

“We’re seasonal people,” he said. “We really enjoyed working in ski resort towns, where you gear up, work really hard for 90 days in a row, then gear back down. There’s something about that that attracts a lot of people. After two years of the every day cycle downtown, when we saw the chance to go back to seasonal, we took it.”

Michael and Sarah caught word that Schweitzer wouldn’t be operating Bottle Bay Resort this summer, and made a phone call property owners Chip and Julie Houske to inquire about signing a lease.

“Both Sarah and I worked at Bottle Bay before,” he said. “She was down here as a bartender and assistant manager for six years, so we knew the business levels, knew the property owners, knew the issues with the building, knew all the benefits. It’s so beautiful down here, just being on the lake, the vibe, the energy of the people, most of them on summer vacation, in flip flops. Our kids have kayaks here and fish off the docks. It’s a home run across the board for the family.”

Another benefit is the addition of a full liquor license, which has been transferred over as part of the lease.

“Sarah makes all juices from scratch, makes her own maraschino cherries,” he said. “We’ll have a full array of alcohol options, so she can offer her amazing homemade signature cocktails and sangria.”

The most important question is if Loaf and Ladle will continue their mission to providing made-from-scratch food that pleases the body and soul. Yelp reviews hover close to five stars for Loaf and Ladle, with most lauding the restaurant for their fresh, worldly menu items made with love and attention.

“We’re maintaining our dedication to high quality, from-scratch menu items,” he said. “We are downsizing the menu slightly, because Bottle Bay Resort is a whole different animal in summertime than town summertime. It’s much busier.”

Michael said he wouldn’t be able to keep up with chicken and waffles – one of Loaf and Ladle’s more popular dishes – so that menu item will now be offered only as a special from time to time.

“We had to drop that one, unfortunately, but we did bring back our fish and chips,” he said. “Those are made with homemade beer batter, every single order. We went through 20 pounds of them on Sunday.”

Michael said the menu is more “pub grub oriented, but everything is still homemade and tasty.”

“We’re also operating the six cabins as well, and the gas pumps,” said Michael. “If anyone is interested in renting a cabin, they can find all the info they need at bottlebayresort.com.”

One aspect of the move that Michael and Sarah were pleased about is how they retained most of their original staff.

“All the faces are familiar,” he said. “Our crew is like family, they’ve been with us since the beginning. Such great people.”

The plan is to go seven days a week until Labor Day, when they’ll pare down to Friday through Sunday until weather shuts them down in October.

“This is just a beautiful spot to be,” he said. “We hope people come out and join us, have a cocktail and stay awhile.”

Loaf and Ladle at Bottle Bay Resort is just a 10-minute boat ride from Sandpoint City Beach, or a 20-minute drive from Sandpoint. For information about the restaurant, cabin rentals or anything related to Bottle Bay, check out bottlebayresort.com.