It was two years ago — almost to the day — that I plugged Wes Anderson’s “new” movie The French Dispatch in the Sandpoint Reader. Of course, we all know what happened in March 2020, as the coronavirus pandemic effectively put a stop to almost every normal form of human activity, and that included the release of The French Dispatch.

Fans of Anderson’s inimitable twee sensibilities and penchant for stellar ensemble performances had to wait for almost a whole year before the film premiered at the Cannes Film Festival in July 2021, and it wasn’t until Oct. 2021 that it actually made it into civilian theaters. Finally, after its unusually long journey from filming to release, The French Dispatch is streaming on HBO Max.

That’s a good thing, because the film is so jam-packed with delightful details, sight gags and subtleties that it more than rewards multiple viewings. To date, I estimate that I have viewed it at least six times — which is a lot, but if there was a “target audience” in mind for The French Dispatch, I’m pretty certain that I would be part of it. 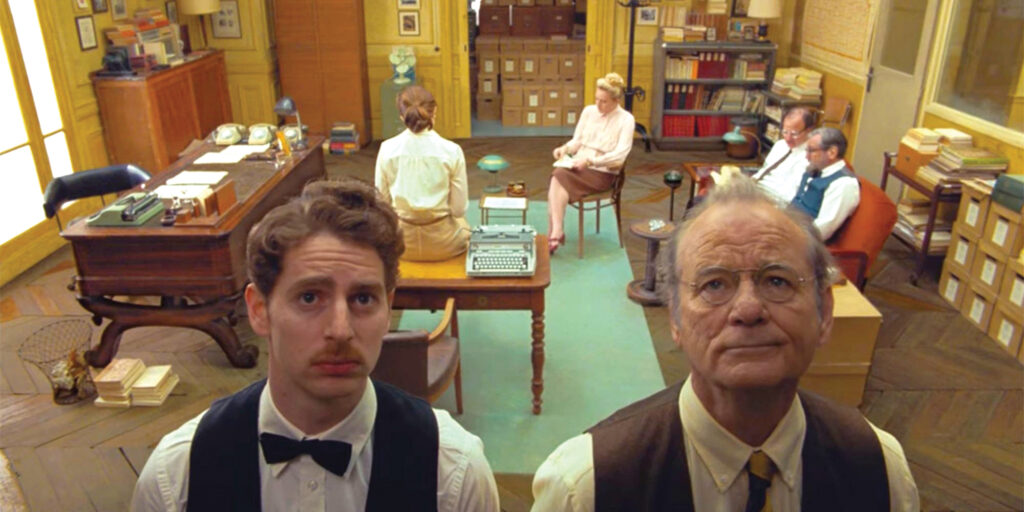 Generally described as a “love letter” to journalism (or at least its most charming incarnation), the film centers on a fictional magazine located in a fictional town somewhere in mid-20th century France.

Using an anthology structure, viewers are introduced to the quirky staff members of the titular publication through their respective stories, which we’re led to assume have at some point been printed for the edification of a readership focused on the hometown of Editor Arthur Howitzer, Jr. (Bill Murray) in miniscule Liberty, Kan. Hence, The French Dispatch is better understood as the foreign bureau of the local paper, a literal and figurative world away.

By stages we get to know the town of Ennui-sur-Blasé, first over the handlebars of Herbsaint Sazerac — “The Cycling Reporter,” played by Owen Wilson, whose métier is to explore the romantic seediness of his adopted community. Next, Tilda Swinton stars as culture writer J.K.L. Berenson as she unfolds the tale of homicidal artist and jailbird Moses Rosenthaler (Benicio Del Toro), his prison guard/muse Simone (Léa Seydoux) and discovery by a neurotic art dealer named Julien Cadazio (Adrien Brody).

“The Concrete Masterpiece” is one of the strongest of the vignettes in The French Dispatch, followed by the less-enraptured “Revisions to a Manifesto,” which centers on a fuzzy-minded student uprising led by Zeffirelli (Timothée Chalamet), his star-crossed crush Juliette (Lyna Khoudri) and reported with dubious personal ethics by hard-bitten correspondent Lucina Krementz (Frances McDormand).

By far the best of the stories — and the last in the cycle — is “The Private Dining Room of the Police Commissioner,” standing as a love letter all its own about the fine art of food writing, and what it can tell us about life itself.

Expat journalist Roebuck Wright (Jeffrey Wright, channeling a melancholy version of James Baldwin) recounts from memory his dramatic observation of a kidnapping that involved the local chief of police, his young son, the brilliant police officer-turned-chef Lt. Nescaffier (Stephen Park, with dead-pan genius) and a bunch of criminals played by the likes of Edward Norton, Willem Dafoe and Saoirse Ronan, among others.

If that feels like one of the greatest casts ever assembled, it’s because it might well be. Storylines, production design, score and all else aside, The French Dispatch is simply a joy to watch for the work of this jaw-dropping ensemble — which of course brings together some of Wes Anderson’s favorite performers from across his earlier films.

It might have taken us two years to get this film on a streaming service, but it was well worth the wait, and even more worth revisiting.