For the past 18 years, singer-songwriter Kevin Brown has hosted a bluegrass radio show on Spokane Public Radio called Front Porch Bluegrass. In those almost two decades, Brown has spent a considerable amount of time honoring what he refers to as the “classic sounds of the first and second generations of bluegrass.” 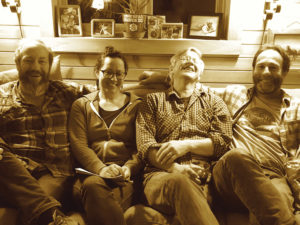 Kevin Brown will be joined by Ben Winship on mandolin, Eric Thorn on bass and Natalie Rae Padilla on fiddle. Courtesy photo.

He has also met and listened to more bluegrass musicians than could comfortably fit on any size front porch, which coincidentally is how he formed a quartet to produce his fourth album, Heroes and Sparrows.

Brown, who lives in Chattaroy, Wash., said his work hosting the radio show, as well as his involvement with the Blue Waters Music Festival held in Medical Lake for the past 18 years, helped expose him to many new players — three of which joined him for his latest album.

Ben Winship plays mandolin and also provided the recording studio, Eric Thorn contributed on the bass and Natalie Rae Padilla provided the sounds of the fiddle to round out the quartet.

The concert at Di Luna’s is one of only three shows the configuration is playing in the region.

“Two musicians are from Colorado and one lives down near Jackson Hole,” Brown said. “We recorded this album together and said, ‘We gotta figure out how to do some shows,’ so this is one-time-only for this configuration.”

Brown said his style can be best described as “folk-grass,” which he says is dominated by his importance over thoughtful lyrics.

“I slave over that kind of stuff,” he said. “I’m in my middle age, so I kind of think about things in life.”

This will be the third time Brown has played Di Luna’s in Sandpoint.

“It’s such a great space,” he said. “Both as a listener and a performer, we appreciate it being a listening room so much. … To have such an attentive audience in a quiet space like that, it’s just the perfect place to play.”