Grab hold of something: Banff Film Fest is coming

Like a fine wine — or, maybe, a well-loved ski jacket — the Banff Mountain Film Festival seems to only improve with time. In it’s 22nd year, the festival is slated to bring more than 25 films over three nights to the Panida Theater.

“I have gone to other programs to listen to audience reaction, talked to the Banff Road Warriors on film selection and their thoughts on which films to run, and on which day which is almost as important,” he said. “It maybe sounds kind of like too much effort but I really obsess to have the strongest program possible.” 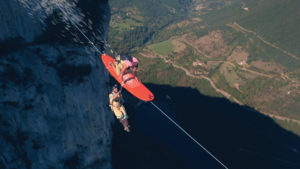 A still from “Surf The Line.” Photo by Hello Emotion.

Boge said every city on the tour experiences a different program, Sandpoint included.

“What I like for Sandpoint is I want something really broad-based. I want adrenaline, I want culture, I want sport,” Boge said. “You may go for a ski flick or a climbing one, but you’ll walk away with a favorite that you didn’t expect.”

Boge is particularly excited for people to see one film, “The Last Honey Hunter.”  The film follows the last man in the remote Nepali village of Saadi as he risks his life to harvest the honey that his village’s economy depends on.

“It’s something where in 10 years people will still talk about it,” Boge said.

A portion of all proceeds from the 2018 Banff Film Festival in Sandpoint will go to support the Satipo Kids Project in Satipo, Peru. The program, which Boge started, helps students receive an education. Boge said four students — who the festival has been supporting for a decade now — have moved on to college.

The event also supports the North Idaho Mountain Sports Education Fund, which helps local children afford lessons, ski gear and lift tickets to ski at Schweitzer Mountain. Their slogan is, “Giving children more than one day on the mountain.” 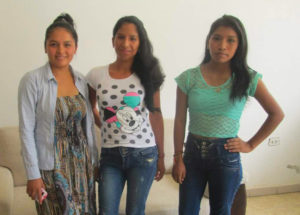 Three of the four kids in the Satipo Kids Project that have now moved on to college. Courtesy photo.

“As always there is a great wealth of films to choose from and it is exciting to see it all come together,” Boge said.

The Banff Mountain Film Festival World Tour will show for three nights at the Panida Theater starting Thursday, Jan 18; Friday, Jan. 19, and Saturday, Jan. 20. Doors open at 6 p.m. and the show begins at 7 p.m. Tickets are available in Sandpoint at Eichardt’s, The Alpine Shop, Outdoor Experience and Burger Express. Tickets are also available at the Burger Express in Bonners Ferry. Purchase tickets online at www.panida.org/event/banff-mountain-film-festival-world-tour.