Some artists are delaying album releases – why?

Of the many things being canceled and postponed in the age of COVID-19, nothing has made me stop in my tracks quite like delayed album releases.

I’m someone who follows the music industry closely, looking forward to Fridays when big albums are set to drop. I can understand events, travel and schools being put on hold while the virus runs its course, but music? Music can be released online, shared in a second on platforms all over the world. 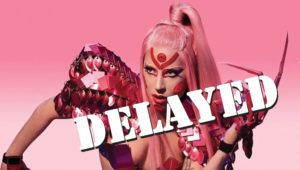 Lady Gaga’s forthcoming album Chromatica is one of the many releases delayed because of COVID-19. Courtesy image.

Many big-name artists scheduled highly anticipated albums for this spring: Lady Gaga, The 1975, HAIM — just to name a few. I couldn’t fully understand why these artists would take something from fans, especially right now as they shelter in place, some even facing job loss and housing insecurity. Lady Gaga’s announcement that she’d be delaying her upcoming album Chromatica did little to clear things up for me.

“While I believe art is one of the strongest things we have to provide joy and healing to each other during times like this, it just doesn’t feel right to me to release this album with all that is going on during this global pandemic,” she wrote, continuing that she wants the “focus” right now to be on supporting medical professionals.

She’s right: Music often serves as much-needed solace and distraction. As for why this isn’t the right time, let’s be honest — it’s about spectacle, and it’s about money.

I get it. Artists need to make money, too. When an A-list performer like Gaga drops an album, there’s a radio and TV circuit to complete. Then there’s the tour, which should closely follow the release. According to Rolling Stone, this period of promotion and live shows is vital for most genres, especially pop and rock.

However, there will be consequences. As Friday release loads lighten during COVID-19, the post-pandemic release calendar is likely to become saturated. Which albums will fight to the top during the fall months? I’m interested to see how it all pans out.

Yet, some smaller artists are taking advantage of these strange, quiet times. Up-and-coming female R&B artist Jessie Reyez released her debut LP, When Love Came To Kill Us, March 27. The album is a searing collection of hard-hitting tracks, showcasing an artist with a fresh sound and undeniable swagger. Young pop icon Dua Lipa even moved her sophomore album up a week from April 3 to March 27.

More happy music news: singer-songwriter Sufjan Stevens released album Aporia ahead of schedule, and promised a portion of the proceeds to food-focused charities to assist families during the pandemic. Folk artist Laura Marling accelerated the release of album Song For Our Daughter specifically in response to the COVID-19 crisis.

“I saw no reason to hold back on something that, at the very least, might entertain, and at its best, provide some sense of union,” she wrote in a lengthy statement ahead of the album’s release, concluding with, “I want you to have it.”

I might harbor salty feelings toward the larger artists, but the system is the way it is. I am, however, incredibly thankful to those still releasing music. Now is the perfect time to find a new album to love — and a new artist to support.