After decades of trespassing across private property to reach the west slopes of Gold Hill, dirt bikers, mountain bikers, hikers and hunters now have an authorized trailhead and trail system close to town overlooking the Long Bridge.

Longtime neighbors and area residents built and have been using some of these trails for years. Most bikers, hunters and hikers (other than immediate neighbors on the hillside) used to access the trails and the IDL forest road from the privately-owned gravel pit property off the county road. 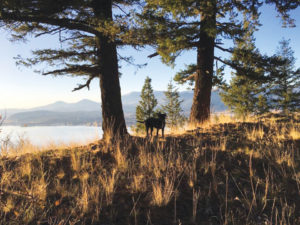 A photo of the lookout at Gold Hill by Susan Druheller.

A few years ago, a county-wide trail planning effort by the Trail Mix Committee (a collaborative group of user groups, nonprofits, federal, state and local government agencies, and other trail stakeholders) saw the need for legal access to the trail system and found that state land overlaps Bottle Bay Road. An old mining road served as an alternative unofficial access point, with a couple of parking spaces across the road.

That 2016 planning effort prompted the IDL to work with the county and Idaho Parks and Rec. to designate this as an area to be managed for recreation – the first time the state land agency has done so in North Idaho, said Todd Wernex, Off-Highway Vehicle/Recreation Specialist for IDL – a relatively new position for the state agency.

“For years we’ve invited people to recreate on endowment lands, but we haven’t given them direction,” Wernex said. “Now we are making it available, provided they stay on trails.”

State endowment lands are constitutionally mandated to raise revenue for the state, so IDL as a rule logs its land or leases it for various purposes. But logging the west slope of Gold Hill had to be done with aesthetics in mind, because it’s so visible from the Long Bridge.

Instead of heavy logging, the state will make a little cash by leasing the land to Bonner County for multi-use recreation. The county has agreed to lease the square mile of state land in the vicinity of Hayes Gulch, a drainage that runs down the northwest slope of Gold Hill.

In exchange, IDL agreed to build a trailhead parking area off Bottle Bay Road, which will soon include a pit toilet and an informational kiosk. With the help of Idaho Parks and Recreation, longtime residents, motorized groups and the Pend Oreille Pedalers bike club, the state also built a trail from the parking area to existing trails.

Pat Gunter, a Sagle-area native and avid dirt biker, helped organize motorized users to help build the new trails. He’s been riding the area for years, and now is among those maintaining and trying to improve the existing trail system.

“What’s so nice is after you get off work, you can ride all that in about two hours,” he said. “We can do a long day to other areas, where they can do all-day rides … but this is the only thing we really got right next to Sandpoint.”

The new entrance trail is a series of switchbacks, which are challenging for mountain bikes. Mountain bikers more often ride up the Forest Service Trail No. 3 – which is designated non-motorized only – on the northeast side of Gold Hill and ride down the Hayes Gulch trails.

Local group Pend Oreille Pedalers is interested in creating an easier grade trail on the Hayes Gulch side, which would interest some dirt bikers, too, said Gunter and Buster Bandy, who’s helping Wernex design the new trail system. Now the trails are best suited to expert riders, but less steep trails would accommodate less experienced riders and won’t rut out as much, Bandy noted.

Bandy’s been driving, hiking and riding around the Gold Hill area for more than 50 years. His dad and uncle used to run about 150 head of cattle on the hill, as well as a few dozen horses. Now Bandy is usually found riding the trails with a chainsaw on the front of his motorcycle, looking to maintain the trails.

“It’s what I do in the evenings and on weekends,” Bandy said. “I usually work until dark and ride out with a headlight. … I like to make sure the trail is open so people can use it. The state actually bought me a chainsaw.”

Wernex even named one of the trails after Bandy: “Buster’s Bullion.”

In deference to the historic use, IDL has retained the common names of many of the trails, such as Russ Keene (a.k.a. “King”) Way and other trails named for those who built them. Several trails are named for the hill’s mining legacy. Gold prospectors left a few large holes and piles of rocks around, though it appears no one ever struck it rich on Gold Hill.

While the majority of trails in the Hayes Gulch system were built by and for dirt bikers, Russ Keene Way is a notable exception. This route goes nearly straight up the west slope from the main Hayes Gulch Trail, ascending a series of rocky ledges, winding through pine trees, wildflowers and even scree fields where Russ Keene appeared to have arranged rocky stairs.

Keene moved to the Sandpoint area in 1911, and worked as a smokejumper, a trapper and had served in the 10th Mountain Division in World War II, according to John Gaddess, a former IDL employee who initiated the Hayes Gulch trail project. Gaddess learned that Keene owned Castle Rock Tree Farm in Talache and used to walk from his Gold Hill home to his farm, using the trail he built up over the mountain.

Now the Hayes Gulch Trails are a convenient getaway for people in the Sandpoint area. While many of the trails were pioneered by some of Sandpoint’s originals, the new trailhead and legal access means this area is destined to get a lot of use. So, stay on the trails, go easy on them (avoid riding on wet, muddy days, for instance) and help out for the occasional work party.

That will help keep this area open and seal its destiny as Gold Hill’s real treasure, enriching the lives of those who tread there.