The diva with a heart of gold

Angélique Kidjo talks to the Reader about her upcoming Festival show

With a career that stretches back three decades, Grammy Award Winner Angélique Kidjo continues to create music that speaks to the soul. Dubbed “Africa’s premier diva” by Time magazine, and named one of the 100 most inspiring women in the world by The Guardian, the Benin-born Afro-pop singer is also renowned as an activist for human rights and equality for women. 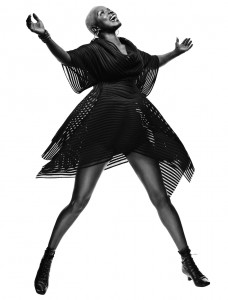 Not only has Kidjo created a body of work over her staggering 15 albums, but the list of stars she has collaborated with over her career is a veritable who’s who among music, including Alicia Keys, Ziggy Marley, Dave Matthews, Carlos Santana, John Legend, Herbie Hancock, Dr. John, Peter Gabriel and Bono.

We were lucky enough to ask the pop star about her upcoming show at the Festival at Sandpoint, her musical roots and the difference she is making in the world, one song at a time.

Ben Olson: I love the energy and driving nature to your music. Your songs seem to be imbued with a cultural view of the world that is not the norm in popular music today. How did your early years in Benin influence what would later become your creative world view?

Angélique Kidjo: I had a very happy and rich childhood. I was raised listening to Beninese traditional music and legends. Beninese traditions are very beautiful and diverse, and the drumming is very complex. Through the history of slavery those rhythms have influenced the music of the Americas. But then also in the sixties all the great vinyls from Europe and U.S. arrived in Benin so I discovered soul music, salsa and rock. This is why my music is so eclectic. I always try to have it rooted in Benin tradition but with many different influences.

BO: I read that you speak four different languages. How do these different tongues affect your ability to craft a song?

AK: In Benin we have 50 languages but I speak mainly 3: Fon, Yoruba and Mina. But as a Francophone country, everyone has to speak French, and then with my traveling, I learn English. I have a passion for Brazilian because their songs are so beautiful. Now, I’m starting to lean Spanish as I just did a tribute to Celia Cruz.

BO: Is it true you even have your own language?

AK: Not really! I read this on internet like you did. The truth is that sometimes I create words with sound that I like, like Wombo Lombo or Batonga. But it is not a full language!

BO: Who were the performers who influenced you early in your musical career?

AK: My first influence was the great Togolese singer Bella Bellow who died very early but had such an amazing voice. I sing her songs quite often. Then Miriam Makeba came to my world and everything changed. I understood that it was possible to be an African singer and travel all over the world and be successful. Also James Brown and Celia Cruz have inspired me so much for their energy and their rhythms.

BO: Your activist and humanitarian work has been lauded around the world by some important voices. The Guardian named you as one of the 100 most inspiring women in the world. How does it feel to be a role model for young women growing up today?

AK: This is a big responsibility. I am not perfect, but I always try to open doors and build bridges between African culture and the rest of the world. It is a long road, of course, but I’m very happy when young artists and young women tell me they are looking up to me.

BO: Your work with the Batonga Foundation strives to bring more education to women in Africa. Do you see your efforts making a difference? How can people help your efforts?

AK: I feel it is making a difference in the lives of those young women we are trying to help. I’m seeing a whole movement around girl’s education these days and this trend make me feel really good. Everybody can help, but remember your own community is sometimes lacking a great education system for girls so you don’t always have to look far away to help!

BO: We’re all excited to have you play here at our beautiful outdoor Festival at Sandpoint. How do you feel bringing a different cultural view to our community?

AK: I hope to bring the uplifting sense of joy and beauty that African music provides to the world. After all we are all Africans from our ancestors so let’s celebrate together and remember we are one humanity and we should try to support each other as much as we can. As I said, African music has influenced Latin Rock and Blues so I promise you won’t be lost. You’ll feel home in the warmth of the groove!

BO: What can we expect from your show at the Festival at Sandpoint?

AK: It will be a combination of my old classics like “Batonga” and “Agolo” with the new songs from the album “Eve” that won the Grammy last year. Get ready to dance and sing with me please!