Matchwood Brewing is slated to open in early fall

Plenty of people find themselves dreaming over a glass of beer, but for Andrea Marcoccio and Kennden Culp, the beer is the dream. 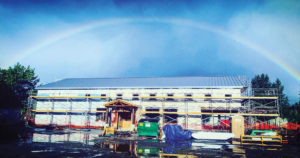 Exterior work continues on the future home of Matchwood Brewing, with a little help from a rainbow.

Together, the couple is working to establish a new brewery by renovating the warehouse at 513 Oak St. in the Granary Arts District. Nestled against other artisanal operations like Evans Brothers Coffee and the neighborhoods west of Fifth Avenue, Matchwood Brewing is well-positioned to establish itself as a community destination where patrons enjoy family gatherings, appreciate local craft brewing and maybe do a little dreaming of their own.

“Kennden and I want to create a neighborhood brewery where personal connections can foster positive community change through the power of dialogue and laughter — one delicious handcrafted beer at a time,” said Marcoccio. “Also, Kennden and I both love the science and collaboration in making quality local beer.”

According to Marcoccio, she and Culp hope to fit into the increasingly diverse ecosystem of local beer and wine by establishing a friendly neighborhood vibe — the kind of location area residents might walk to after a long day of yard work or fun at the beach. The location and atmosphere of the Granary Arts District warehouse is key to achieving that goal, and Marcoccio and Culp said they just might make some community magic happen thanks to a partnership with building owners Steve Holt and John Edwards. Their support — plus the hard work of a talented construction crew — is bringing new vitality to a building with very old bones.

“We are incredibly lucky to have the support, experience and talent of John Edwards and Steve Holt on our team,” Marcoccio said. “From design to build, our crew is made up of hard-working individuals who are pouring their heart and soul into the renovation of the warehouse. … Our new roof is on, siding is going up and we will begin working on interior finishes in the coming month in preparation for our equipment to be delivered in July.”

Of course, the heart and soul of any brewery is its beer, and Marcoccio said they are excited to share their work with the community. They’ve been brewing for six years, and their education received a jump start when Robert Rivers and Fernanda Menna Barreto Krum, co-owners of Imagine Nation Brewing Company in Missoula, Mont., took the couple under their wing for an intensive brewing internship that covered both the craft and business of brewing.

“(We) love to make a variety of beers from light to hoppy and sour to malty to match the wide variety of tastebuds we will serve,” Marcoccio said. “We will mostly feature English and American ales at Matchwood Brewing Company.”

According to Marcoccio, the hope is to introduce food options once the business opens, making Matchwood Brewing a fully-featured location for a night out. The kids won’t need to fear boredom either, as they can busy themselves in designated play areas while the adults enjoy a few pints. The business will also feature a balcony overlooking the taproom, a large covered and uncovered patio for outdoor service, indoor and outdoor stages for live music, a community room for meetings and a Crowler machine for canned, on-demand tap beer to go.

As a neighborhood brewery, Matchwood is envisioned to reflect the character of its community. That includes the name itself, which is taken from a small, early-1900s community located just north of Sandpoint that harvested western white pine for matches.

“These matches brought warmth, light and fire to our communities,” Marcoccio said. “At Matchwood Brewery, we seek to match the hard work and quality product served in a neighborhood brewery where locally crafted brews spark dialogue, laughter and community.”

Even the 25-foot bar, crafted from a western white pine originally from Culp’s family property in Noxon, Mont., has a story to tell.

“A group of great friends helped (us) fell the 107-year-old tree this spring to be milled and kilned for the community to gather around,” Marcoccio said.

The Matchwood Brewing renovation is a project in progress. However, Marcoccio said the team is working toward a fall opening date, perhaps one targeting September. She hopes people will stay tuned for an official opening date to be announced shortly. In the meantime, the team is focused on giving an old building a new lease on life.

“The most exciting thing about the process is taking an iconic warehouse with community ties and breathing new energy into the space for the community to enjoy,” Marcoccio said.