It didn’t take long for disorder to break out at Tuesday’s Bonner County Board of Commissioners public hearing. 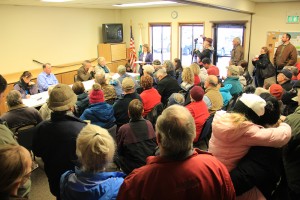 Around 100 people crammed into a small room at Monday’s meeting with Boundary County Commissioners to discuss resolutions to oppose refugee resettlement. Photo by Ben Olson.

Perhaps it was inevitable that the meeting, in which commissioners unanimously voted to oppose Syrian refugee resettlement, would be tense and emotionally fraught. But when the first speaker, Mary Haley, suggested the resolution would invite comparisons to North Idaho’s history of white supremacy movements and “do nothing but paint a Nazi symbol on our foreheads,” the boos and catcalls were immediate.

“You called us Nazis!” one man shouted.

It was the most chaotic moment in a meeting filled with dozens of public comments. More than 100 turned out to hear the commissioners, who ultimately decided to support Gov. C.L. “Butch” Otter in opposing refugee resettlement. They cited their backgrounds in the military and reasoned that, while many refugees are likely good people, Bonner County’s safety is at risk. They also noted radical Islam represents a particularly pernicious threat to the country.

“I do have a heart,” Commissioner Glen Bailey said. “ I am a Christian. I believe in loving my brother. However, as an elected official, I do have a responsibility.”

Their decision followed about an hour of public comment. The two opposing statements, one by Haley and the other by Steve Lockwood, centered on North Idaho’s national reputation as a haven for racists. Even if the reputation is unfair, any action reinforcing it could hurt tourism from Spokane and Canada, where many refugees are being resettled. And since the county lacks authority to halt refugee resettlement, they called the resolution a toothless political action.

The majority of attendees, however, called for officials to protect Bonner County from potential terrorist attacks. Some said the resolution didn’t go far enough.

“I would like to see something a little more powerful, a little more gutsy,” said Glenn Rohrer. “[You should] refuse to allow this program to continue.”

Bonner County Sheriff Daryl Wheeler received resounding applause when he reiterated his opposition to refugee resettlement in Idaho. He first weighed in on the issue two weeks ago with a letter to Otter urging cessation of the program.

“When I see a potential threat to this community, I am obligated to do everything in my power to expose that threat,” he wrote in the letter. “The resettlement of Syrian refugees is a plausible threat and must be prevented.”

Many expressed beliefs similar to state legislators like Heather Scott, R-Blanchard, who claims Muslims seek to infiltrate rural communities, reproducing until they can enact Sharia, or Islamic law.

“Islam is not a religion—it is a culture, a way of life,” said Danielle Ahrens. “Sharia law is their constitution.”

One woman said Dearborn, Mich., which houses a prominent Muslim community, has already established Sharia law and is sentencing residents to floggings, amputations and stonings (according to the Southern Poverty Law Center, this is a rumor based on a satire article). She also claimed the U.S. government is purchasing guillotines, presumably for imminent beheadings. Others held to the conspiracy theory that President Barack Obama is working with the Muslim Brotherhood to transform American society.

Several of the meeting attendees also turned out for a Boundary County Board of Commissioners meeting Monday morning. Once again, more than 100 people packed into a small room with the majority urging commissioners to oppose refugee resettlement. Commissioners delayed a decision until next week, with Commissioner Dan Dinning cautioning against any action targeting one particular religion.

“Once you start for a specific religious group, you open it up to curve potentially into any religious group,” he said. “I want to be careful that we’re not picking out a religion.”