Avalanche danger persists throughout the West, resulting in a historically dangerous year in the backcountry

season is shaping up to be one of the deadliest on record. While the record-holding 2007-’08 and 2009-’10 seasons saw 36 avalanche-related deaths each, the current season had already logged 33 deaths by the end of February.

Locals saw evidence of unstable snowpack first in mid-December, when skiers ducked ropes and triggered a slide in closed terrain at Schweitzer Mountain Resort. Then, in early January, a solo snowboarder triggered a slide on Blue Mountain — a popular backcountry area accessible from Schweitzer, though not located inbounds on the resort and therefore not subject to Ski Patrol’s avalanche mitigation efforts.

The entire country has been witness to similar stories all winter long, particularly in the West, where many of those tales ended in severe injury or death. During the first week of February, the Northwest Avalanche Center reported that the United States “experienced more recreational avalanche fatalities than during any other period in the last 100 years.” 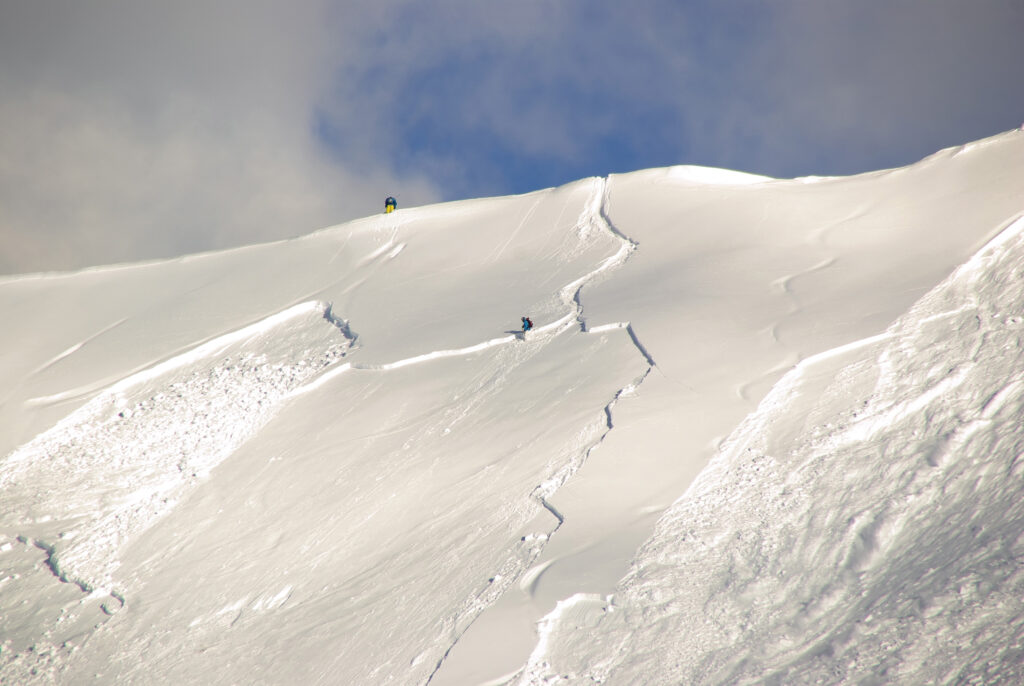 The telltale signs of an avalanche at a resort in the Alps. Stock photo.

Avalanche experts have landed on two main ingredients that have led to this recipe for disaster: historically weak snowpack, and unprecedented high numbers of recreationists in the backcountry — spurred in large part by the COVID-19 pandemic.

The making of a snowpack

Every year, weather patterns determine the integrity of a snowpack. The pack comes together like a flaky pastry with each weather event, though in some cases, the result is flakier than is ideal for a safe and predictable winter recreation season. Such was the case this year, according to Schweitzer Snow Safety Supervisor Tom Eddy.

The “biggest problem this year,” according to Eddy, was a period of rain in January followed by “cold, clear weather,” resulting in “a pretty decent rain crust over all aspects, all elevations.”

“And then we had a little dusting of snow on top of that crust and then we had surface hoar develop just above that crust,” he continued, noting that surface hoar lacks structural integrity. “The worst part about that is that it didn’t get skied up, [and] the sun didn’t have enough intensity to start breaking it down. Then we received a couple of inches of light-density snow on top of that surface hoar, which preserved it in place.”

While other places across the West did not necessarily receive that same rain crust, Eddy said widespread surface hoar has prevented snowpacks throughout the region from bonding together.

“This isn’t the season to go after the big lines, whether it’s on a snowmobile or on skis,” said Eddy, who also serves as vice president of the Friends of the Idaho Panhandle Avalanche Center. “You always have to keep that layer in the back of your mind when you’re making your decisions.”

As winter comes to its gradual end in the mountains and the snowpack warms, Eddy said the snow’s surface will be key to telling recreators what is happening deeper down. For instance, if pinwheels of snow begin popping up, that’s an indication of instability.

Right now, Eddy said, snow safety experts are observing what he called a “low probability, high consequence problem,” as the weakest layer is sitting about halfway down in the area’s snowpack.

“The likelihood of triggering [a slide] is getting a little more remote, but the results if you do trigger it are going to be a lot larger,” he said, adding that if someone were buried, it could be beneath “potentially a meter of snow or more, depending on where you are and wind loading.”

As harrowing as those conditions sound, many who have experienced avalanches — both in the backcountry and on established resort slopes — would agree that it doesn’t take very much snow to turn a perfect powder day into a perfect nightmare.

‘I was not getting out on my own’

Nick Appl said it was “a cloudy, typical Schweitzer-visibility day” when he was caught in an inbounds avalanche in January 2018. Despite hitting Schweitzer’s slopes with a friend, Appl said the foggy conditions meant he and his partner weren’t always visible to one another.

“I slowed down because it was hard to see, and the snow that I triggered was on me,” he said. “I turned around and it was there — I was in it.”

Appl said that he tried to stay upright, but was pushed down onto his stomach. When the slide stopped, he was able to move his arms around just enough to poke a glove above the snow.

“What I was most scared of was that someone else … was going to come through, and it only would have taken a little bit more snow to completely bury me,” he said.

Luckily, two nearby skiers heard him yelling and spotted his glove. Ski patrollers were nearby, attending to an injury, so they came over to help. Appl isn’t sure how much time passed, but he estimates he was buried for about 10 minutes — “a long 10 minutes.” After being dug out, he went to First Aid.

“I wasn’t injured, luckily — not physically, anyway,” he said.

That weekend turned out to be an eventful one for Schweitzer, as Ski Patrol detonated explosives in the North Bowl to trigger an avalanche that downed trees and pushed ice out of Colburn Lake. Appl recalls a number of other skiers also being caught in small slides that weekend, though none of them were fully buried like him. He said he suspects that a fair amount of fresh snow, along with wind loading, is what led to his avalanche experience.

“It just doesn’t take that much,” he said. “It’s true that when the snow stops, it’s solid. I was not getting out on my own.” 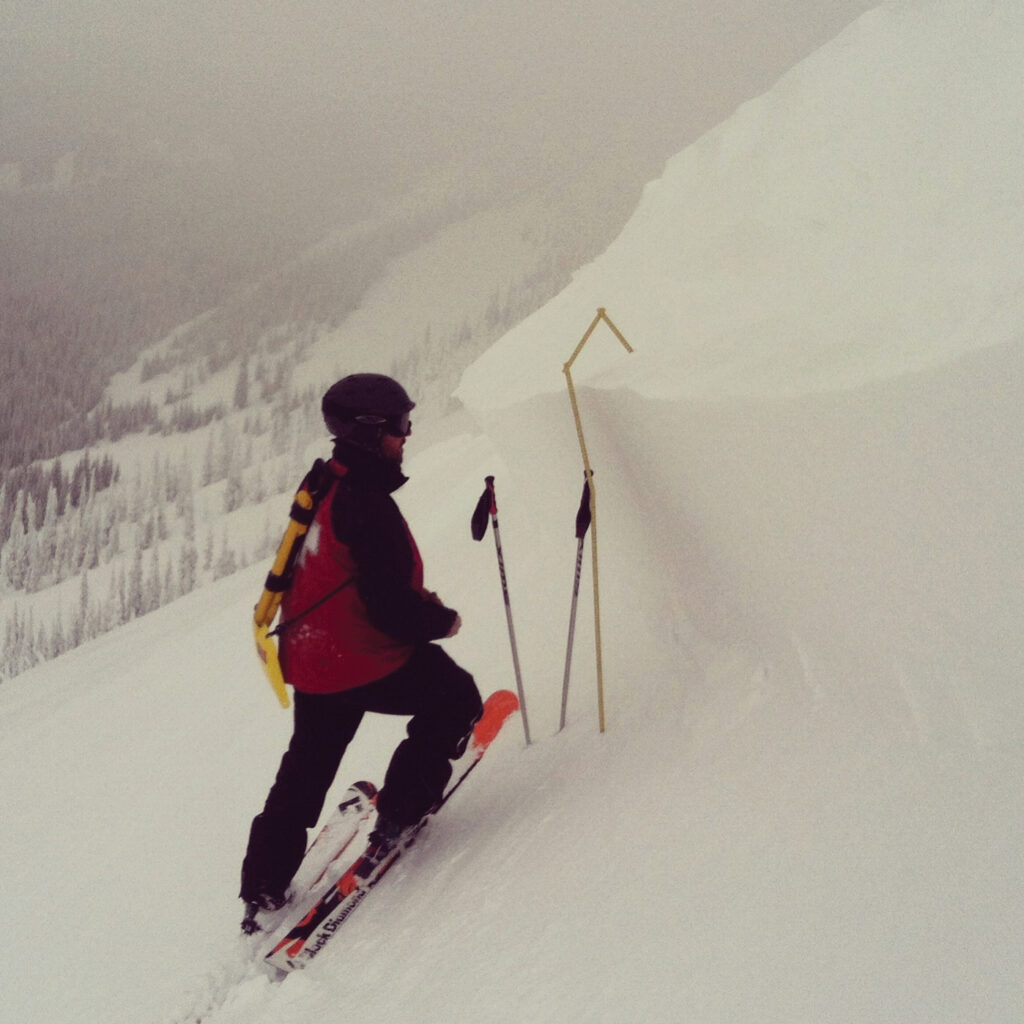 Examining the crown after mitigation work in South Bowl at Schweitzer. Photo by Jake Sullivan.

Since then, Appl said he’s been opposed to people listening to music while recreating. Had the other skiers around him been wearing headphones, Appl believes he may not have been found.

“I remember there were a lot of social media posts and other messaging [after the incident] about ‘make sure you ski with a buddy,’” Appl said, “and yeah, that’s good advice, but it’s not very thorough advice.”

Despite the effect recreation can have on a reactive snowpack, Eddy said “that’s not to say, ‘Don’t go out’ — you just have to be cognizant of the hazards when you do go out.

Part of being cognizant of the hazards is being adequately equipped for any situation, Eddy said. “At minimum,” that means a beacon, shovel, probe and partner.

“You should have dedicated rescue equipment that doesn’t leave your body,” Eddy said.

Beyond the physical materials needed in order to responsibly enter the backcountry, experts are also pointing to the COVID-19 pandemic as a reason to reevaluate the kind of mental state recreationists are bringing with them on their snowy treks.

“[W]hile it’s impossible to draw a direct line between the stressors of the pandemic and avalanche incidents, the virus clearly adds overt and latent stressors on all of our lives. These stressors influence our day-to-day interactions, and they likely impact our recreational mindset in the backcountry,” officials with the Northwest Avalanche Center shared in a Feb. 10 media release. “Your risk is determined by deciding where and when to go. Please consider the intersection of the snowpack, your experience, and the added stress of recent months on you and your partners. Are you feeling the need to push it, or could you pull back a bit?”

Another key to a sound mindset when heading out, according to Eddy, is acknowledging that the avalanche danger is prevalent throughout the backcountry — even if that snow is a stone’s throw from a resort.

“People refer to the backcountry terrain just out of ski areas as ‘side country’ or ‘slack country,’ and I think that’s a huge misnomer because [it gives] people a false sense of security,” he said, adding later: “The backcountry is the backcountry, however you access it — whether it’s from a ski lift, whether it’s human power or snowmobile or snow bike.”