Amid a long season of discontent, local professional photographer Marsha Lutz felt compelled to do something to make a statement about inclusion, diversity and community. It started a few years ago, when she stepped outside to find hate literature on her doorstep. Then, this past spring and summer, as tensions around the country flared around the Black Lives Matter movement, coronavirus lockdowns and the right-wing extremist response to both, she sensed “all of these things were sort of coalescing.” 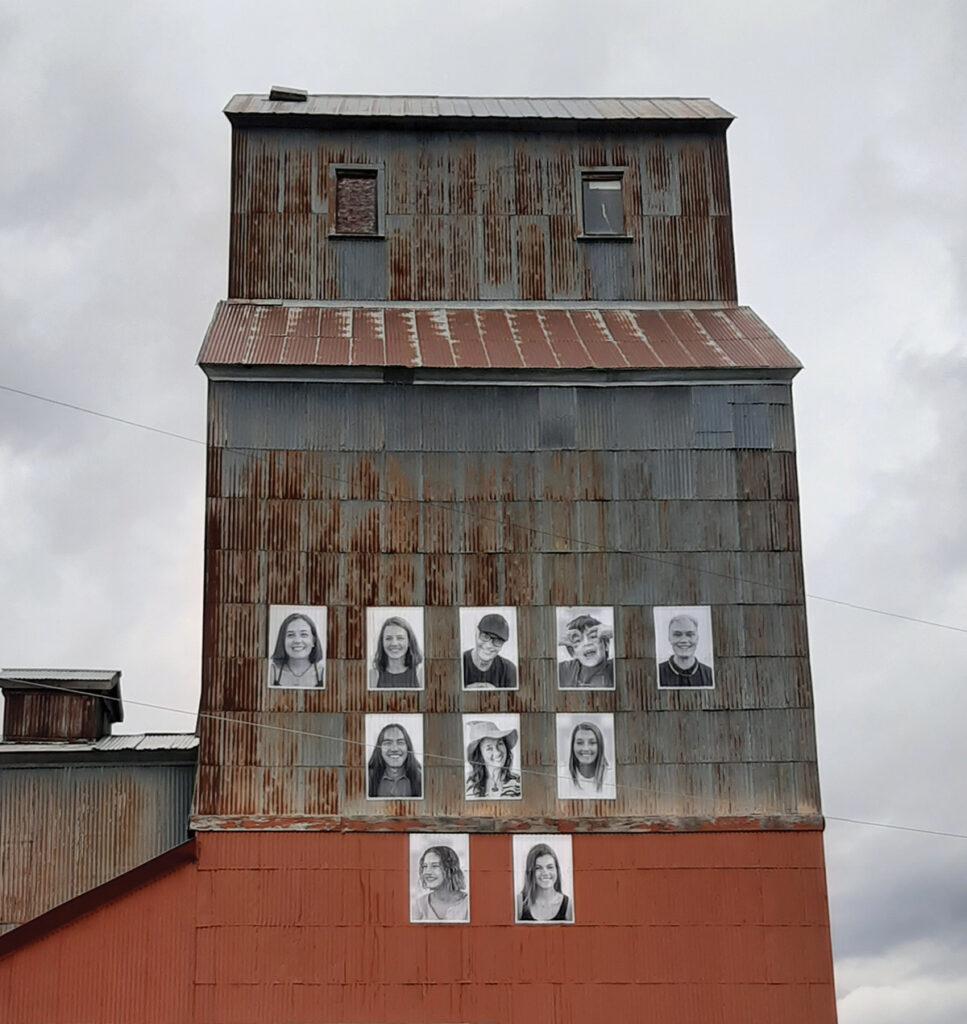 Marsha Lutz’s Inside Out Project on display at the granary building off the corner of Fifth Ave. at Church Street in Sandpoint. Photo by Ben Olson.

“I was kind of caught in the middle of that,” she said, referring to the early-summer BLM march by area youth that drew an unwanted and threatening armed presence by self-appointed “militia” protectors who traveled from around the region to occupy downtown Sandpoint against a phantom “antifa” threat.

“I witnessed the coal rolling; I was horrified because I literally felt like I was caught right in the middle of this really dark energy and these sweet kids who were out there with their signs, just ‘Love Lives Here,’ and standing up for basic human rights for people,” she said.

Drawing on her career as a portrait photographer, Lutz tapped into the Inside Out Project — a global citizen art project launched by French photographer JR in 2011 that invites participants to display black-and-white portraits of individuals in support of their various causes. More than 260,000 people have taken part in the project across 129 countries, drawing attention to issues ranging from homelessness and exile to pollution, cultural diversity, refugee justice, LGBT rights, the inspiration of sports in the developing world and community identity.

Lutz looked at the rancor animating much of the local discourse and decided, “I wasn’t doing enough to stand up to what I was seeing happening in our community. I knew there were a lot of people who feel the same as I do, in the way of wanting our community to be more compassionate.”

It was then that she approached a few area young people — including those who had taken part in the summer’s BLM demonstrations — and asked if they’d be interested in expressing their message of racial and social justice through the Inside Out Project. With the kids’ enthusiasm and their parents’ permission, a core group developed with Lutz as leader, working together to craft a message of tolerance and identifying individuals whose portraits could stand, literally, as the face of a community united against racism, intolerance and hate.

Their message, which is posted along with the 28 portraits on the granary building located off the corner of Fifth Avenue at Church Street, reads in part that “We stand for equality for all — no exceptions. … Our group action stands for tolerance, inclusivity and respect for all citizens and visitors. We believe that by respecting and celebrating each other’s differences, we create a loving place that everyone can be proud of.”

“You can really see the humanity [in the portraits]  and see how we are alike in many different ways, yet we are all very different and there’s beauty in that,” she said. “As a portrait photographer that’s what I’m looking for — to bring out the beauty, the goodness in each single person that comes out. … It’s about the light in the eyes and what’s shining through.”

Recognizing that the project has already drawn some criticism from those who say its message is unnecessary — even divisive itself — in a community that many argue has no issues with intolerance, racial or otherwise (despite clear present and historical examples to the contrary), Lutz pointed out that much of that opposition has occurred online, where the root of the problem lies. As people spend more and more of their time and energy sparring over political and social issues on social media, they lose the ability to look their fellow citizens in the eye and have a legitimate conversation.

“People aren’t connecting, and the cause of pain is isolation,” Lutz said, “so much so that when you’re in pain you lash out in anger.

“I strongly want to bring the community together,” she added, encouraging viewers to have conversations about what the project means to them and why. “I do not see this as a partisan political statement. Human rights is a moral issue, not a political message.”

To learn more, and show support for the Sandpoint Inside Out Project, visit facebook.com/sdpt.insideoutproject or instagram.com/sdpt_insideoutproject. Take a selfie or post your own image with the portraits and share your statement about the project by tagging its accounts on Facebook and Instagram.