Earth is old — more than 4.5 billion years old. As far as we know, life has been clinging to Earth in its various forms for about 3.7 billion years, though it was unicellular in nature for most of that time. Early Earth was an inhospitable place — searing hot near the beginning and freezing cold for several hundred million years after. 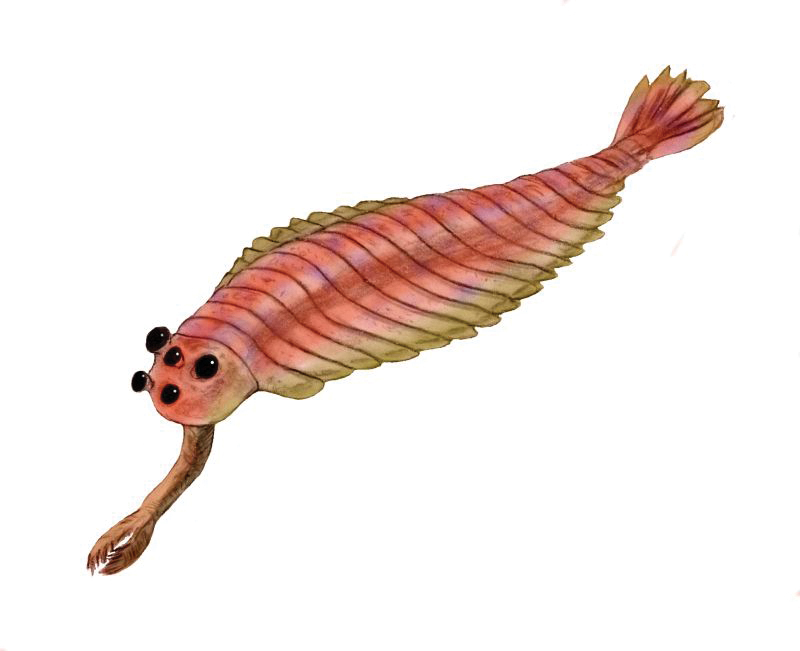 The Opabinia, a creature so unusual and contraditctory to everything we see in life today, it’s hard to believe it not only existed, but did so for more than 20 million years.

There were actually two instances where most of planet Earth froze over to a degree that it has been referred to as “snowball Earth,” a time of global glaciation — we know this happened because of evidence of glaciation on rock near the equator. About 100 million years after the last recorded snowball Earth event, one of the strangest periods of biological evolution took place: the Cambrian Period.

The Cambrian Period marked a window in time where life evolved quickly into unique multicellular organisms that began about 543 million years ago, and lasted for at least 50 million years. Corals and other reef-forming organisms began to appear during this time, as well as a multitude of strange mollusk-like creatures, worms and arthropods like sea scorpions.

The strangeness of creatures that evolved in this time cannot be overstated. If you were to travel back in time and float around the ocean, you’d think you had accidentally traveled to an alien planet, as virtually nothing resembled life as we know it today. The only critter you would likely recognize was the trilobite, which found remarkable success existing through the Cambrian Period and beyond.

Trilobites were one of the greatest success stories of biological survival in the history of our world. They were remarkably complex for the period of time during which they lived and they seemed to have spread everywhere, with fossils ranging from Australia to Siberia and Canada. Hundreds of different variants existed around the globe, and due to the conditions in which they lived (crawling through sediment on the ocean floor) and their calcite chitin exoskeletons, they were preserved remarkably well for humans to study hundreds of millions of years later.

Trilobite fossils have been so well preserved and documented that their evolutionary forms have been utilized as roadmaps for scientists to study how Earth’s climates changed over an immense period of time. They survived for around 150 million years, until they finally died out during one of the greatest extinction events on Earth, during the Devonian Period about 354 million years ago. By this time, trilobites had evolved with large, pointed spikes on their exoskeletons to protect them from jawed predators like fish, which had begun to appear during the Devonian Period.

A lesser known, but far stranger creature that existed during the Cambrian Period was Anomalocaris canadensis, which looked like some kind of nightmarish, Lovecraftian shrimp creature with a segmented body that was flattened, like a halibut. These weird things had two curled and segmented mandibles that were lined with pointed spines, and two eyes on stalks similar to a snail. The strangest thing of all was that they were likely the largest form of Cambrian life, measuring in at anywhere from three to five feet long and predatory.

While the mandibles for Anomalocaris were terrifying, its mouth was even stranger — the mandibles were designed to hold its prey while it devoured them bit by bit with a contracting orifice that looked like a pineapple ring lined with spines, which it would use to crush its prey.

While it probably couldn’t kill a human, being grappled and bitten by one or several would be a truly terrifying experience for anyone who already suffers from crippling thalassophobia.

Not everything in the Cambrian seas was out for blood. Tamisiocaris borealis was a large shrimp-like animal equipped with a set of filters similar to some of today’s whales. It would swim through the sea, allowing large amounts of microscopic matter to slip through the filters while pushing away larger critters that could present a choking hazard.

Filter feeders are a bit of a conundrum from our evolutionary standpoint. It’s hard to imagine large creatures being sustained by such small matter. You have to wonder if these animals are always hungry. The truth is, most animals in the wild are always hungry, and it’s why they survive. Unlike humans, which need large caloric intakes to keep our bodies and brains functioning, filter feeders don’t need to expend a tremendous amount of energy by living in the ocean and will generally follow ocean currents, allowing them to simply vacuum up whatever is in their path. In the case of whales, this allows them to build up large fat reservoirs to keep warm, but this likely wasn’t the case with Tamisiocaris. Though large for Cambrian life, these guys rarely exceeded three feet in length.

The oddest form of life we have ever discovered from the Cambrian Period is undoubtedly Opabinia, a creature so unusual and contradictory to everything we see in life today, it’s hard to believe it not only existed, but did so for more than 20 million years. It had a body shape similar to the other shrimp-like animals of the age, but it had an unusual head. It was equipped with five mushroom-like eyes and a prehensile proboscis that ended in freaky, gripping mandibles.

Nature is weird. Stay curious, 7B.