The trees of the Long Bridge

The majority of the denizens who enjoy walking or cycling across the old Long Bridge have no idea how precarious its existence is. It’s not that it’s about to fall into the lake. But a persistent story suggests we have to keep watering the trees on it if we want to keep using it as a park.

Here’s what we know is true: What we now think of as the pedestrian bridge was the third span between Sagle and Sandpoint. It was built in 1956 to replace a wooden bridge that had suffered from heavy traffic during the war years. The fourth bridge—the current bridge used by vehicles—was built alongside it in 1981.

That was 35 years ago. After that point, things begin to get murky. 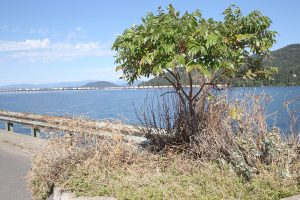 One of the trees lining the walking bridge portion of the Long Bridge. Photo by Cameron Barnes.

According to Marvin Fenn, engineering manager for District 1 (the northern panhandle) of the Idaho Transportation Department (ITD), the people who were in the department when the new bridge was built are gone now, and he could find no written record of why the old bridge was left in place and not removed when the current vehicle bridge was built. The paper files that were in use at the time are in a vault in Coeur d’Alene, and they are, shall we say, hard to search at this point.

Skip Pucci of Sandpoint was around 35 years ago and is still around now. His recollection is that the state condemned the old bridge because the side rails were not the right height, or perhaps the spacing between them and the bridge surface was not legally acceptable.

In any event, the old bridge remained, and Pucci decided to put a tree on it as a memorial to his brother-in-law. For a planter, he ordered a well casing from a concrete supplier in Cocolalla, and he got a spruce tree donated. He loaded up dirt in his pickup and drove it out on the condemned bridge, and several members of his family joined him to plant the tree in the well casing.

When they were in the midst of this solemn ceremony, the little group was confronted by a member of the highway department staff, who had brought a state patrolman with him.

“He gave me two hours to get the tree off the bridge,” remembers Pucci. “I told him that wasn’t enough time; it was getting dark. So he gave me until morning.”

But Pucci didn’t take the tree away: “What I did was get another one and put it out there.”

When he was confronted by authorities again, Pucci recalls, he explained he just needed till the weekend to get the two trees off. And then over the weekend, Pucci lined up aid from several school children and planted five more trees.

In Pucci’s telling, there was a screaming ITD official after that, followed ultimately by an agreement that the trees could stay on the bridge if it was designated as a city park. But if the trees died, the bridge was to go back to the state. The official told his boss that the trees wouldn’t last more than three weeks, Pucci recalls, “which inspired me to put more trees on it.”

That was more than three decades ago, and the story has since become a part of the bridge’s folklore. The trees are still there (although the spruce have been replaced with aspen, which require less water), and Pucci is still watering them.

Meanwhile, the bridge—once closed to all—now sees hundreds of cyclists and walkers, especially in the summer months. And according to the story, if the trees die, we will all lose use of the condemned bridge.

But perhaps things are not so dire. According to Kim Woodruff of Sandpoint Parks and Recreation, the bridge is not and never has been a city park. And Fenn insists that the bridge is and always has been the property of the state.

“We never gave it up,” he says with conviction, even though the paper work to prove this may be buried in an ITD basement.

Would we lose use of the old bridge if the trees were to die? I asked Fenn directly: “Absolutely not,” he replied. Fenn doesn’t know Pucci and wasn’t around when Pucci perpetrated his surreptitious planting. “Someone probably put the trees out there to give it a more pedestrian feel,” he says. He’s not enthused about the well casing planters, which are heavy, and suggests that an engineer would probably prefer them off there. But trees and planters or not, “The bridge has turned into an icon,” he points out.

So we may not have to adhere to the deal that Pucci remembers: In order for us to use the bridge, it doesn’t necessarily have to have trees and be a park.

But the trees are there, and they do give the bridge a park-like feel. So the hunt is on for a way to water them that improves on the one Pucci has been using, which involves dropping 5-gallon buckets into the lake on ropes and hauling up lake water. He has come to realize that he won’t be able to do this forever.

He’s tried on several occasions over the last few years to recruit assistance, and it has materialized—temporarily. A community group volunteered, but people would help for a few weeks and then disappear. No one has indicated a willingness––like Pucci’s––to haul buckets of water up from the lake for the next 30 years.

Fortunately, it doesn’t necessarily need to be another Skip Pucci, who is obviously irreplaceable. There has been talk of a sprinkler system. Avista is willing to provide power for it. But it’s not clear where the funds would come from: The county has no money for it, the state sees it as the responsibility of local authorities, and the city of Sandpoint is fond of saying that the bridge is beyond the city limits.

But maybe some of those walkers and cyclists have some ideas. If that’s you, the Bonner County Trail Mix Committee wants to hear from you; you can reach them through Jan Griffitts, [email protected], 208 290 1973.