‘Skid Row Marathon’ and ‘How to Defuse a Bomb”

Two inspiring documentaries at the Panida

Sandpoint Film Festival has added the showings of two feature documentaries as part of the Festival this year. Showing on Thursday night Nov. 1 at 7:30 p.m. at the Panida is “How to Defuse a Bomb.” 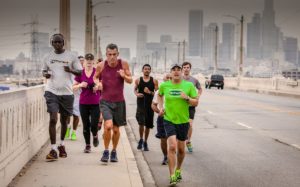 In 1975, Irish immigrant Dennis Mulcahy of the NYPD bomb squad gathered a group of family, friends and neighbors to start a project offering children from Northern Ireland a chance to temporarily escape the violent turmoil of their daily lives in their own country and thus Project Children was born.

From modest beginnings, Project Children ultimately made it possible for over 20,000 Catholic and Protestant children to visit the U.S. for a summer. Here they forged unexpected friendships and discovered they had more in common with the “enemy” than they thought.

“I’m young enough to only remember the last decade of The Troubles,” says director Des Henderson, “a decade in which things seemed to get progressively worse in Northern Ireland before they got better. As tough and unnerving as it was to grow up in Mid-Ulster, it must have been nothing compared to growing up in the urban centres of Belfast and Derry during the ‘70s. It was these same images that prompted a group of friends from New York to intervene in the lives of vulnerable, impressionable kids to try and coax them away from violence.”

“Skid Row Marathon”screens on Friday Nov. 2 at 7:30 p.m. It is a critically- acclaimed documentary and has already won 13 different awards from 10 different U.S. film festivals. It is the heart-warming and inspiring story of an unlikely group of individuals from LA’s Skid Row – an area well known for being forgotten by society.

A criminal court judge, Craig Mitchell, starts a running club on LA’s notorious skid row. The club’s members, comprised of homeless drug addicts, a recovering single mom and a paroled murderer, consider themselves among those least likely to succeed. Three times a week, Judge Mitchell heads down to the Midnight Mission, a homeless shelter for recovering drug addicts, and takes the residents running. If they refrain from drug abuse and stay out of prison, Mitchell will take them around the world to run marathons.

As they train together to run in international marathons, they learn to dream big as they are re-acquainted with their own dignity. It is a story that celebrates second chances and overcoming obstacles.

It’s also a story with a happy ending as many of the runners have gone on to steady jobs and kicking their habits for good – thanks to running. Runner’s World Section Editor Rick Pearson said: “To watch it is to be reminded of the goodness that exists in everyone – and the redemptive power of putting one foot in front of the other.”

For more information about this weekend’s Sandpoint Film Festival, log onto www.sandpointfilmfestival.com.