Bonner County commissioners voted unanimously Aug. 2 to accept grant funding from the Idaho Department of Parks and Recreation to expand the RV campground at the Bonner County Fairgrounds. The decision was postponed from the July 26 meeting of the board, as fairgrounds officials waited for more information from IDPR about the county’s ability to move or demolish the expanded campground without having to repay the grant funds.

The possibility of moving or demolishing the site became the center of conversation due in large part to the location of the expansion on two acres bordering the current fenceline of the Bonner County Sheriff’s complex. 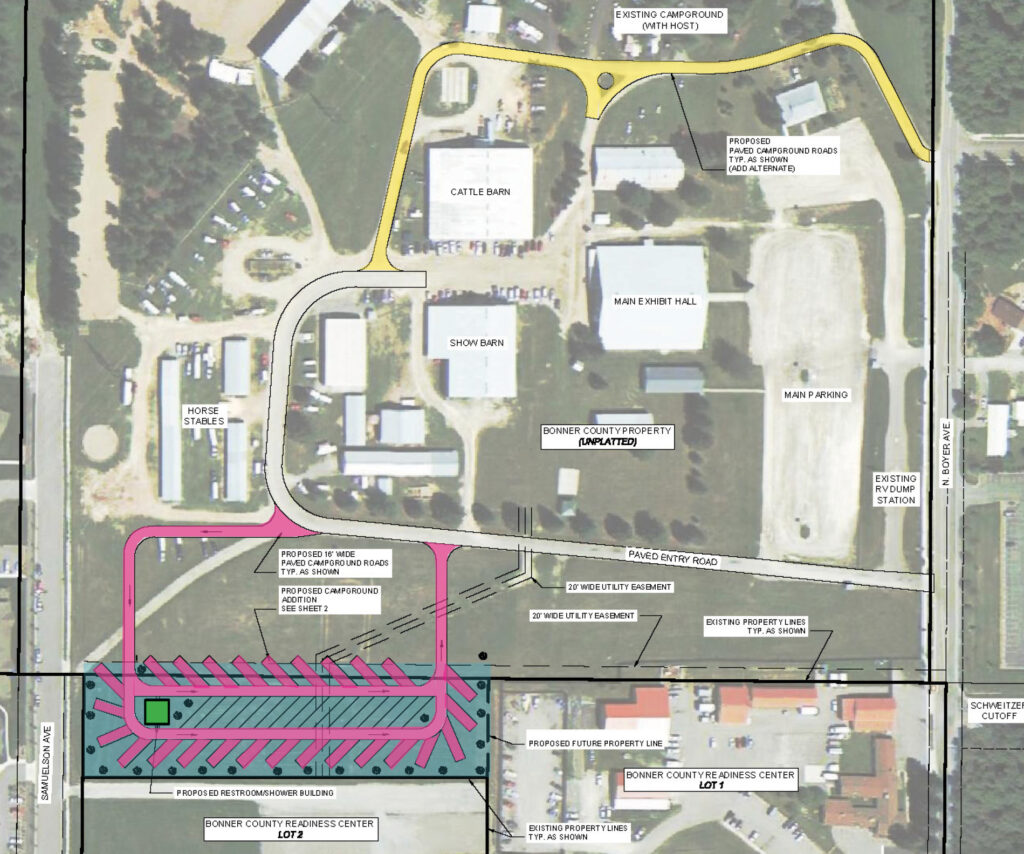 The July 26 meeting saw ample testimony from Sheriff Daryl Wheeler and others, arguing that the county-owned land slated for the campground was actually intended for future enlargement of the sheriff’s grounds, with Wheeler stating: “These two acres will eventually be used as a parking lot for the justice complex when and if it is expanded to include a new courthouse, offices for the prosecutor and public defender, a new 911 dispatch center, expansion of the jail, records storage expansion, and general storage facilities for the sheriff’s vehicles and equipment.”

Commissioner Dan McDonald pushed back against the sheriff’s claims and pointed to other county acreage nearby that could host a new justice facility, for which he said there are currently no plans.

Wheeler did not speak during the Aug. 2 meeting, during which commissioners accepted the grant funding and effectively gave the green light to the campground expansion project. The Reader asked Wheeler for a comment after the meeting, to which he replied via email: “Stay tuned!”

As to whether the county would be liable to repay the $473,000 in grant funding should it opt to move or tear down the expanded campground, Fair Director Darcey Smith told the board on Aug. 2: “The short answer would be no, we wouldn’t have to repay.”

“The long answer is if we were to tear down the facility — the project that was built with these funds — for whatever reason … if it’s less than 15 years between the time of it being constructed and when we would tear it down, it would look very poorly on the county,” she continued, adding: “That would likely inhibit the fairgrounds from receiving any future funding from IDPR.”

However, should the site be determined better suited to another use or the fairgrounds be relocated 20 or 30 years down the road, Smith said “that would be a more acceptable timeframe,” with a caveat being that “the fairgrounds and the county would not be able to reapply for that project to get funding to rebuild that.”

“That would be on our dime,” Smith said.

Commissioner Jeff Connolly, who advocated for the deferred vote at the July 26 meeting, said he appreciated the confirmation that the county wouldn’t be on the hook to repay the grant funding.

“I don’t think anybody up here can predict what’s going to happen in the future,” he said, referring to the board. “As long as this property can be reclaimed if it’s decided by future commissioners [that there is] a better use for it, then I don’t have a problem moving forward with this.”

Commissioners voted without additional public input, with McDonald stating that there had already been “lengthy public comment” on the matter during the previous week’s meeting.

“All we did was table the decision,” he said.