That time of year has come and gone again. Countless pickup trucks sitting vacant in parking lots around private and public parking lots alike, the echo of gunshots in the far distance, camo everywhere. Elk season! 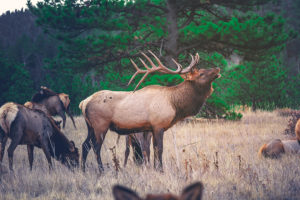 I know what you’re thinking: That long-haired hippie dude must be against killing elk, he’s always about save the planet and whatever.

Clearly, you haven’t met me. I’m basically the opposite of a vegetarian. I once wrapped a sausage in a hamburger patty and let it rest in a bacon cradle.

I have exactly zero qualms with putting a delicious carcass in my brand-new, 14-cubic-foot freezer.

For those that haven’t tried elk meat before, it differs from venison pretty drastically. It’s very lean and has a distinct taste. Similar to beef, but not as gamey as deer. It makes some pretty bomb-A jerky, smokies, steaks, you name it. I usually have to conceal most of the gamey-ness of venison with enough spice to choke a camel, but elk is just about perfect as it is.

That being said, despite blisters on my feet and narrowly dodging a cold, I didn’t have the joy of dragging a carcass down the mountain this year. Deer be warned this season: I have an empty freezer and an equally empty belly! I saw your convenient little path! I know where you are going!

Elk share a family with deer, Cervidae, but are considerably larger. The average whitetail buck sits around 150 pounds. A large elk can push 700. Anyone who has ever hunted one or had the misfortune of meeting one on the highway knows these guys are huuuuuge. They’re also super kinky when it comes to making more freezer-fillers.

Bulls will dig out things called wallows, where they will pee and proceed to roll in it. For some reason, this gets cows all hot and bothered and attracts them in great number from vast distances to create something called a harem, which is exactly what it sounds like. This stink is a double-edged sword, however, as it also draws other bulls.

Have you ever been in a bar and seen one guy being the center of attention, then another guy comes up and talks some smack, and suddenly they’re fighting to see who the dominant male is? Yeah, elk do that, too, but they have antlers that can span up to almost four feet and will wrestle with all 700-plus pounds of flesh and bone behind them. If dudebros had antlers to rassle with, football would be a completely different game. It’s not uncommon for these sparring matches to end in lethal injuries for all parties involved. For the elk, not the dudebros.

Bulls make a distinct call during mating season called bugling. It’s immediately distinguishable as having come from an elk, or a group of tweens at a Bieber concert. Seriously, it’s a pretty entertaining sound, especially when you see it coming from one of these towering creatures. It’s a very loud, sharply pitched screech that can be heard from miles. Cows love it, and are drawn to the loudest buglers from miles away. Hey, the falsetto works for Adam Levine, why wouldn’t it work for superdeer?

Cows only go into heat for a day or two once a year, but mating during this period is fierce. They may mate over a dozen times during this time. When pregnant, the calf gestates for over 240 days, about 40 days shorter than a human. Most of the year, males and females don’t intermingle. Bulls will form bachelor groups, which is really funny to imagine. Just imagine Beavis and Butthead but with antlers. The cows will form large herds to care for young. Strength in numbers means females are less susceptible to predators like bears, wolves, mountain lions or wild boars in some parts of the world than the males are. Gray wolves have been observed several times isolating a male with advanced hunting and herding tactics to score an easy kill. In “World of Warcraft” we call that tactic “peeling,” and it means isolating someone from the rest of their team by slowing them down or trying to shock them into running, then turning them into a pile of red jelly once they’re alone.

It’s just not a Mad About Science article unless we bring some prehistoric silliness into the fold. Megaloceros giganteus, known as the Irish Elk, was a prehistoric deer that stood nearly 7 feet at the shoulder and had a 12-foot antler span. Its remains have been found in Irish bogs and the Siberian tundra. They’ve found some fossils that were as fresh as 7,700 years old, which means our ancestors may have hunted these giant things for several thousand years.

What is it about Ireland that makes such giant things? Irish elk (awesome), Irish Wolfhounds (awesome), huge flavor stouts (awesome)? Okay, I’m stretching it with that last one. I just can’t help it, man! I love that part o’ me ancestry.

I hope you managed to have better luck this elk season than I did. At the very least, I hope you enjoyed the serenity of nature and some of the incredible views up the mountain like I did.

I’d share one of the absolutely greatest and most primal views in all of Bonner County with you, but that’s kinda’ my spot, so…

See you in deer season!