For most high school students, the thought of homework over summer vacation, studying through lunch period and extra curricular study assignments would send them running for the hills. For the dozen members of Sandpoint High School’s Academic Decathlon Team, known as the Acadeca, it’s just the cost you pay to be the boss. 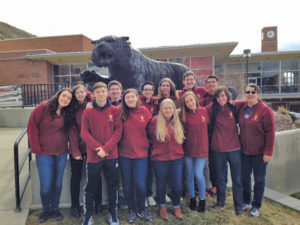 The 2018 Acadeca team from SHS (names listed in the article) gathers before the state meet in Pocatello last month. Courtesy photo.

The SHS team competed against 14 teams comprised of 140 students from around the state at Idaho State University on March 16-17, placing first place in the large school category of the Academic Decathlon State Meet. The win means the SHS team will move onto the U.S. Academic Decathlon National Final in Frico, Texas, on April 19-20, along with Sugar-Salem High School, the first place team in the medium school category.

“We are one of the powerhouses in the state when it comes to speech and interview,” said SHS teacher and team coach Dana Stockman.

Senior Sam Jackson, a fourth-year decathlete and team co-captain, was also honored for his public speaking skills and was featured in the Speech Showcase at the awards banquet on Saturday.

“Acadeca has taught me how to persevere through, especially when it comes to large amounts of studying,” said Jackson, who plans to attend Boise State Honors College and study computer science upon graduation. “I found the speech and interview portion helped me a lot. I used to have a fear of public speaking, like most teenagers, but because you’re forced to do a speech for a score, it has helped me develop these skills. Even in job interviews, I’m more confident in my abilities.”

Every year a different theme is chosen. For this year’s meet, students studied Africa. In order to fully master the staggering amount of information they need to know to do well, Stockman said these students spend in inordinate amount of time studying.

“We meet every day throughout the school year,” said Stockman. “The kids get materials when they assign the theme at the end of the school year. We met once a week throughout the summer, read together, went through material, then we work in our class period, they come in at lunchtime and study. You know those non-student days when teachers have to work and kids get the day off? They come in those days, also. Just to study.”

For students who win individual medals, they don’t just get recognition and bragging rights, they also have a shot at scholarship money.

The national team is comprised of co-captains Jackson and Capodagli, as well as teammates Marchiando, Kinard, Curtis, Reed, Hunsaker and Loper. They are busy raising money to pay for their trip to Texas to represent SHS at the national meet. Students anticipate they will need to raise an additional $5,000 to cover their airfare, hotel, ground transportation, meals and incidental expenses. Anyone interested in making a donation may contact Dana Stockman at Sandpoint High School.

“I am so proud of the team,” said Stockman. “They have worked hard all year and are so deserving of the awards that they brought home from Pocatello. Every member of the team improved their score from the regional meet in January, and every student medaled in at least one event.”

Way to go, students! Go get ‘em in Texas.