Will the 2020 adaptation be any good? Signs point to ‘maybe’

As Frank Herbert wrote in his iconic sci-fi novel Dune, “God made Arrakis to train the faithful.” Faithful his fans have been, from 1965 to present, praying to the worm-god Shai Hulud for a film adaptation that comes within a thopter’s ride of representing the full complexity of the six-book universe that Frank built. 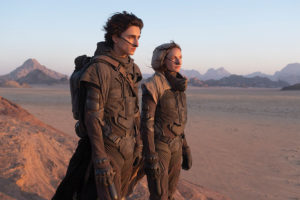 A still shot from the forthcoming Dune film. Courtesy image.

First, there was the 1984 film starring Kyle MacLachlan in a pre-Twin Peaks role as the “kwisatz haderach” super-being character Paul Atreides, a.k.a. galactic jihadist/emperor Muad’Dib — the only feature yet made of Dune, though focused only on Book 1 of the Dune Chronicles. Former Sandpoint resident and legendary director David Lynch helmed that project, but, as slashfilm.com notes, “The result is one of the famous disasters in Hollywood history, and Lynch was so upset at the behind-the-scenes meddling that he disowned the movie.” (Sorry man, I love it.)

Second came the three-part Sci Fi Channel mini-series in 2000, which along with its 2003 sequel attempted to tackle Books 1-3 of the Chronicles. The only big-name actors in that effort were William Hurt as Paul Atreides’ father, Duke Leto, and James McAvoy as Paul’s son Leto II (who merges himself with a practically immortal sand worm).

Regardless of these efforts, valiant and/or doomed as they may have been, none have really captured the sweep and scope of the Dune universe. The drama, which vaults readers (or viewers) into a future-time quasi-feudal galactic empire as it slides into a millenia-spanning existential-spiritual reformation, is simply too big and complicated to submit to Hollywood’s crude instruments.

So it is with equal parts excitement and trepidation that I await the forthcoming big-screen Dune adaptation from director Denis Villeneuve.

This big-budget attempt is due in theaters in December and stars Timothée Chalamet as Paul Atreides (thumbs up); Zendaya as his warrior bride Chani (meh); Oscar Isaac as Duke Leto (big fan, but nope); Josh Brolin as fighting troubadour Gurney Halleck (convince me); Stellan Skarsgård as villain Baron Vladimir Harkonnen (should have been Duke Leto); Javier Bardem as Fremen tribal leader Stilgar (thumbs up); Dave Bautista of Guardians of the Galaxy fame playing the “Beast” Rabban (everyone’s thumbs up); and Jason “Aquaman” Momoa as Atreides swordmaster/most-important-character-in-the-bigger-story Duncan Idaho (this should have been Oscar Isaac’s role and thumbs down so hard you could use them as seed drills to plant all potatoes in the real-life Idaho).

For his part, Lynch has already dumped on the whole project. In fact, he’s gone out of his way to say he won’t be watching the 2020 Dune, telling all and sundry that he has “zero interest” in it. Fair enough. I’m afraid it will be a flop, too, but as the sisters of the Bene Gesserit warn us, “Fear is the mind killer.” I look forward to facing my fear and hoping Momoa doesn’t mumble-bumble and grunt-flex his way through the whole damn jihad.