It doesn’t matter whether you’re crafting art or high-quality beer: culture matters. And this month, independent Idaho breweries are celebrating that culture. 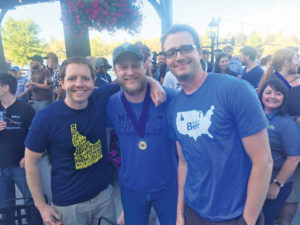 Idaho Brewers United, an organization dedicated to promoting and protecting statewide craft brewing, is celebrating the value of local beer throughout April during Idaho Craft Beer Month. For the next four weeks, brewers across the state will stress why independent, locally owned breweries fill an important role in communities.

“(Events like this) build the community, and I think first and foremost that’s what it set out to do,” said Michelle Silvertson of Laughing Dog Brewing.

Idaho brewers consider the state to be something of a hidden gem in the nationwide craft brewing scene. For one thing, the state filled with breweries producing an impressive array of beers on the cutting edge of both popular and aficionado tastes. But Idaho is also important to beer culture as a whole. As one of the top producers of barley in the nation and the second-biggest source of hops, Idaho supplies many of the ingredients brewers depend on to make an amazing product. Couple that with the ready supply of fresh, clean, cold mountain water, and it’s no wonder why the state has such a vibrant beer culture.

For brewers like Mack Deibel of MickDuff’s Brewing Company, it’s more important than ever to assert the importance of that vibrant, independent culture. Local brewers and beer lovers have been troubled by the trend, established over the last several years, of massive corporations like Anheuser-Busch buying up craft breweries and diminishing their commitment to quality and community building. What’s more, Deibel said massive brewing companies have poured their money into fighting state legislation that would benefit small breweries in an effort to dominate the market. 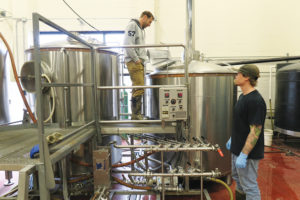 According to Deibel, threats like aggressive corporations are why organizations like Idaho Brewers United are important. Independent brewers allege that when corporations, which ultimately are concerned about the bottom line over every other element, dominate the market, it is ultimately the consumer who suffers.

“Craft beer is a culture in and of itself,” said Silvertson. “It’s the smaller mom-and-pop-type shops that are staying true to what beer is itself.”

And what better way to celebrate beer than by making more great beer? Laughing Dog and MickDuff’s are ready to do just that. For one thing, both breweries are participating in Pints Up today —Thursday, April 5. Buy any regular-priced pint and get a pint glass as part of the fun — just make sure you get there before supplies run out.

Even better, check out the new beers Laughing Dog and MickDuff’s are introducing. Since 2018 is the year of the dog, Laughing Dog is reading the signs and introducing a Year of the Dog beer series. Check out the latest in that series, an India red ale with “an earthy tone, citrus kick and sweetness that finishes dry.” And at 5:30 p.m. on Pints Up day, MickDuff’s breaks out its new India Black Lager