Profile on Autism: The Corcoran Family

In the Corcoran family, there are two sides to living with autism.

On the one hand, the condition brings about incredible focus, attention to detail and talent. On the other, the tendency to be overwhelmed by sensory overload can bring about meltdowns and panic attacks. 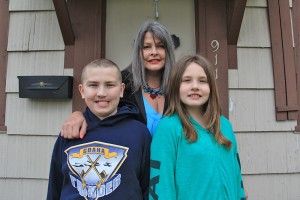 Christine Corcoran knows both sides in all their nuance. Her son, Jean-Paul, now 12, was 3 years old when she first suspected that he might have autism. An official diagnosis came the next year, and almost a decade later, the Corcorans have learned to live with the special needs of autism while appreciating the special characteristics that come along with it.

“The most important thing in our family is being able to laugh,” said Corcoran. “That saves our butts every day.”

As with every other individual on the spectrum, Jean-Paul’s autism manifests in its own unique way. He is verbally communicative but often fixates on particular ideas or images. When he feels overwhelmed by his environment, he often breaks down in fits. And he has difficulty in social situations, preferring to spend time by himself than with other kids his age.

“That’s one of the things we’re focusing on,” said Dan Mohn of North Idaho Children’s Mental Health, who has worked with Jean-Paul for many years.

“I remember saying to him, ‘You enjoy your own company, don’t you, Jean-Paul?’ And he told me, ‘Well, yeah, I’m a pretty cool guy,” Mohn continued with a laugh.

Acclimating to social situations is just one method Mohn uses to help Jean-Paul adjust as he grows older. He focuses therapy on specific goals, whether they be improving communication, practicing interaction skills or making faster decisions. They pursue those goals through several practical exercises. Sometimes it’s as simple going out for a hike. Other times, it means Mohn prodding him to use more descriptive language when explaining how his day went, recounting the details rather than just saying, “Great.”

According to Corcoran, people like Mohn have been invaluable in helping Jean-Paul improve his life skills over the years. Another essential individual is Dr. Diana Travers-Lucanto, who has worked with him as a staff member at Farmin-Stidwell Elementary School. Corcoran can’t imagine what life would be like today without Travers-Lucanto, who anticipates retirement this year.

“Without her help, we would be like a bobber just floating along until we got bit,” Corcoran said. “She has been so instrumental in challenging Jean-Paul to go beyond his comfort zone—which means the rest of us have to get outside of ours!”

Sure enough, special needs education for kids on the spectrum is hard work, both for the child and his or her family members. Corcoran remembers a challenging incident many years ago when Jean-Paul worked with specialist Cindy Ruguleiski. After noticing how Corcoran would baby Jean-Paul, Ruguleiski asked her, “How long do you want him to be 3 years old?” At first, Corcoran was offended. Then she realized the necessity of pushing and challenging her son.

That Jean-Paul has come as far as he has is a testament to the work of both his teachers and his family. His sister, Simone, finds herself in a unique position as she navigates his autism on top of normal sibling turmoil. That can be challenging, Corcoran said, and it makes for both good days and bad. But they get through it one step at a time with the help of one another and the many supporters around them.

“If I didn’t have the team together that I have, I couldn’t do it,” she said.

One of the most important things is developing Jean-Paul’s interests, of which he has many. He loves video games, drawing and building with Legos. Music is a particular talent. Coming from a musical home with a musician for a father, Jean-Paul plays the bass and piano, and he has a beautiful singing voice.

There’s no question that challenges lie ahead. Farmin-Stidwell Elementary School has been a very supportive and bullying-free environment, but with middle school just around the corner, there are uncharted waters on the horizon. Add puberty into the mix, and that adds up to a lot of change.

There’s also the stress of dealing with Optum, which took over managing Idaho Medicaid outpatient mental health services in 2013. According to Corcoran, the transition has been nothing but negative. She worries that service cuts will have a disastrous effect on families like hers, especially considering the growth of autism diagnoses in recent years.

“It’s very terrifying to think of the state we’ll be in 10 years if these things are cut,” she said.

The Corcorans intend to take on those challenges as they come. In the meantime, all that remains is standing together in good times and bad, just like any other family.

“I’m so proud of Jean-Paul,” Corcoran said. “I tell him that all the time.”

This article is the second in a three-part series profiling local families living with autism. The series will conclude next week with a final profile.