Rawson will unveil her artwork at Infini Gallery and Art Studio on Friday, April 6 from 5 to 8 p.m. The show, titled “Whimsical Nudes” features a compilation of Rawson’s original artwork, most of which features nudism in some fashion or another. 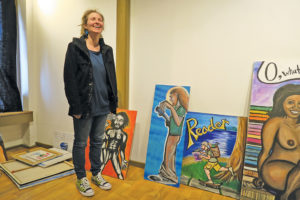 “It’s my life’s work,” said Rawson. “If you hated yourself and your body as much as I did, painting really insane nudes is something I can get lost in.”

Rawson, a disabled veteran, claims she’s had trouble holding down solid work over the years, and that painting is just as much self-therapy as it is a form of artistic expression.

“Brain injuries make you a little slower,” she said. “With art, you can go as slow as you want. You can be in any position you want. I can’t sit in one position for a long time, so this is what I do.”

After enrolling in the U.S. Naval Academy, Rawson quickly changed direction and enlisted in the U.S. Army to train as an emergency medical technician. It was during her time with the Army that she broke her neck.

“Healing doesn’t happen under a burka,” she said. “It happens with color, light. What it boils down to is, if you hated yourself as much as I hated myself, something has to give. This show is all about reclaiming beauty. Seeing that everybody is beautiful. It’s ridiculous that magazine covers in the grocery store are much more pornographic than a nude woman working in her garden. All that air-brushed fake silicon stuff. Maybe that’s what I’m protesting against: The materialism of the woman’s body.”

Rawson’s pieces, which feature the naked human body, run the gamut from humorous to political to minimalist beauty. Some are self portraits, others famous people such as Barack and Michelle Obama. One, she dubbed “The Tweeter,” features Donald Trump sitting nude on a toilet seat, tweeting. It’s something to behold.

This is Rawson’s first art exhibition in Sandpoint. Her dream is to convince the powers that be to allow her to paint a mural on the back wall of the Panida Theater.

“My idea is to do it architectural, without humans,” she said. “It’s like looking inside the theater. Tromp l’oleil is the style I’m looking for. It’s something I’ve thought about for years, and it finally came into my mind about what could be my least controversial piece that could shine up that old gem of a theater.”

Check out Rawson’s “Whimsical Nudes” collection at Infini Gallery Friday, April 6 from 5-8 p.m. Most of the works show the human nude body, so viewer discretion is advised.