Thanksgiving just wouldn’t be the same without the annual “Giving Thanks’’ concert by Sandpoint’s homegrown musical stars Shook Twins at the Panida. Last year, due to COVID-19, the group chose to play their show virtually, but this year they’re back on the Panida main stage Saturday, Nov. 20. Doors will open at 6:30 p.m. and the show begins at 7:30 p.m.

Katelyn and Laurie Shook will be joined by bandmate Niko Slice to play as a trio for most of the evening, but will be joined by Justin Landis on drums and Kyle Volkman on bass for the last portion of the show. 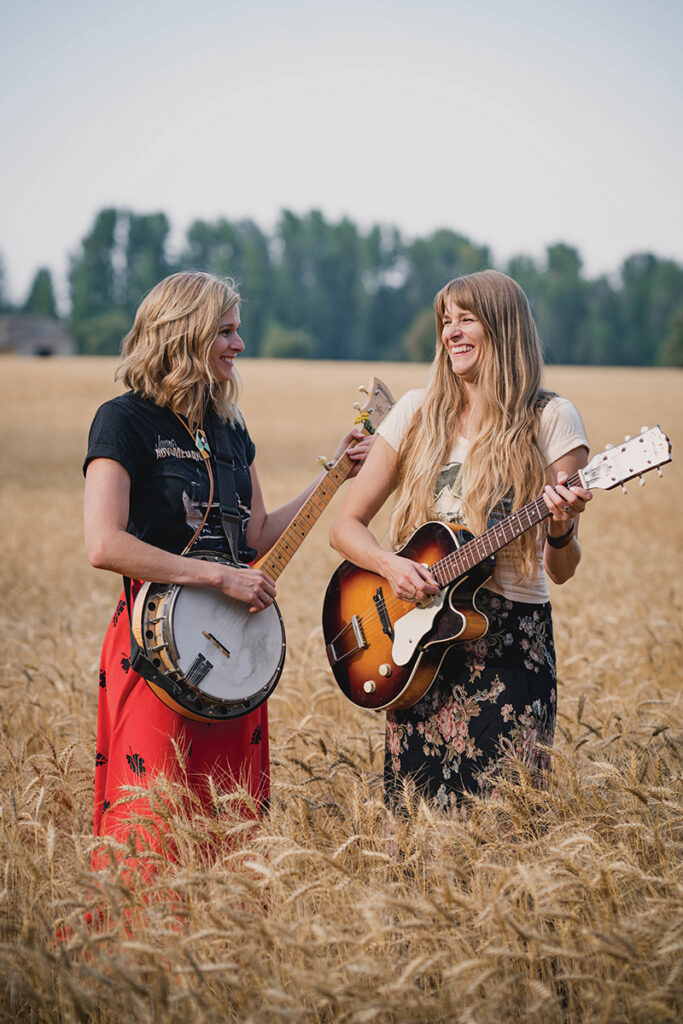 Laurie and Katelyn Shook, from left to right, of the band Shook Twins. Photo by Racheal Baker.

Best described as indie folk-pop, Shook Twins’ music fluctuates from haunting harmonic ballads to poppy dance tunes; a mix that has taken them around the country on various tours big and small for more than a decade. The intuitive vocal harmonies between twin sisters Laurie and Katelyn is only matched by the infectious energy of utility man Niko Slice, who also writes and leads songs on occasion.

Opening for Shook Twins is local indie folk duo Little Wolf, which features Sandpoint songwriter Josh Hedlund and Landis. Hedlund’s prolific songbook has earned him a loyal following of listeners over the years, and Landis is the quintessential go-to musician who is apparently able to play every instrument put in front of him.

As a special treat during the Little Wolf set, a music video for their song “Crickets” will be premiered on the big screen. Shot by Willie Witte, who hails from Sandpoint and has made a name for himself variously as director, editor and cinematographer for the TV series Roadtrip Nation, the video features Katelyn Shook and Kyle Volkman as actors.

“Willie asked a few couples if they wanted to be the stars, but they couldn’t do it, so he asked Kyle and I and I was super into it,” Katelyn told the Reader. “I wanted to be part of something creative because I respect his cinematography so much. We filmed it over three days in October. It’s creepy and awesome.”

Katelyn said the main event will feature a mix of new and old songs, touching on more “mellow vibes” while playing as a trio with Laurie and Niko, and picking up the pace when Landis and Volkman join on stage.

The show will serve as the first event at the Panida Theater under its vaccination policy, which states an event can be booked to full occupancy if audience-goers and event organizers show proof of COVID-19 vaccination or a negative test result. The other option, without a vaccination or negative test proof, would be limited to around 200 capacity.

Dozens of anti-vax members of the community weighed in their opinions on the Panida’s Facebook page, pushing back on the policy, but Shook Twins are undeterred.

“Some of the arguments online are saying, ‘Why don’t vaccinated people need to take a test, since they can spread it also?’,” Katelyn said. “Our defense would be we’re just looking at, with all the data we have out there, having this protocol in place. It’s not foolproof, but we’re at least keeping people out of the hospital. That’s important to us to ensure we can keep doing our shows next month and feel safe about it. We’d just much rather have the one thing we know we can do at a show that makes it a little safer.”

Attendees will be required to show proof of a COVID-19 vaccination, or display negative test results, at the door. COVID-19 tests can be obtained at the testing facility by Bonner General Health on the corner of Fourth Avenue and Alder Street.

Shook Twins will be selling commemorative posters along with other merchandise at the show with proceeds donated to the Panida Theater. They’ll also pass around a hat to collect donations for the historic theater, which recently completed renovations on the marquee.

“I feel like the Panida is on an upward trajectory,” Katelyn said. “Working with the new staff members while rolling out the show has been night and day from our past experience. They’re really on top of it and really supportive of our safety. We feel heard and I just appreciate them.”