As Bonner County grapples with development, a movement grows to put land use code under the microscope and rural integrity at the forefront

When it comes to bureaucratic battles, little else inspires the masses to assemble quite like a land use issue.

One slated to come before the Bonner County Planning and Zoning Commission on Thursday, Nov. 18 is a rezone application for more than 700 acres off Colburn Culver and Rapid Lightning Roads, from 20-acre parcels to 10-acre parcels. The meeting, scheduled to start at 5:30 p.m. at the Bonner County Administration Building, will see a presentation from Planning Department staff and a recommendation by the commission to either deny or approve the file, put forth by applicants “Pack River Partners LLC/Don & Julie Skinner/James & Diane Otis.” 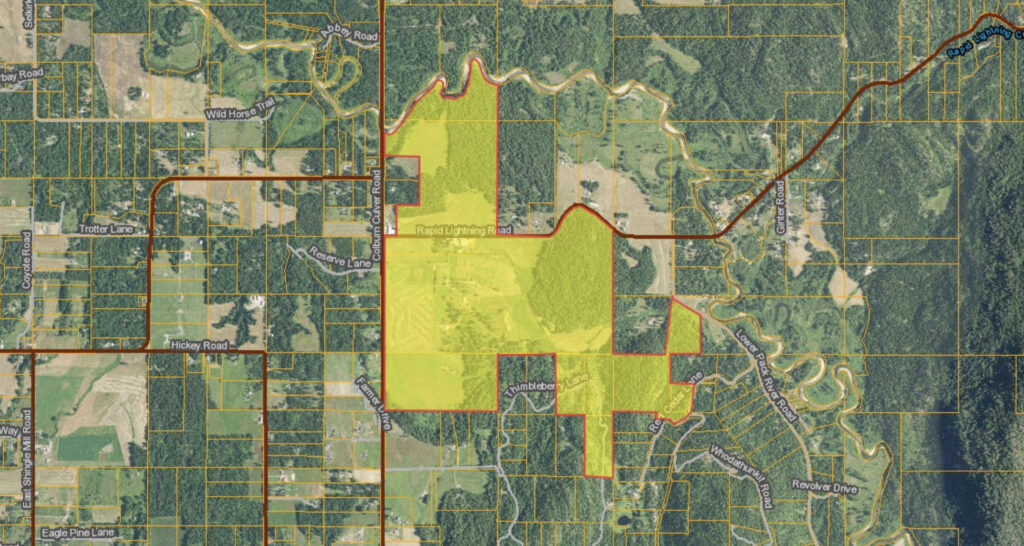 A map of a proposed rezone of 700 acres off Colburn Culver Rd. up for discussion at the Nov. 18 Bonner Co. Planning and Zoning hearing. Courtesy Bonner County.

Energy doesn’t seem to be an issue for the people of Bonner County as of late, at least not when it comes to land use planning issues. Information about upcoming projects populates local Facebook forums and hearings are regularly packed with people waiting to take part in the public comment period.

But what began as bands of neighbors joining forces to put the microscope on issues in their backyards has become a broader movement, led in part by Project 7B — a non-partisan group aiming to make land use issues more accessible to everyday people — and more recently, by Keep Bonner County Rural.

Concern over the Pack River Partners upzone off Colburn Culver Road is just one example in the ongoing density debate in Bonner County — not a new story, but one that’s reaching a fever pitch with the help of a pandemic-induced population boom and growing appetite for development.

But where, and how, should this development be directed? That’s the question inspiring a closer look at county land use code, led by groups like Project 7B and KBCR, who were inspired to mobilize thanks to developers circumventing the subdivision process, and larger and larger swaths of land seeking approval for smaller and smaller parcels.

“It started with a group of people from around the county who were just fed up with the stuff that’s been going on — the shenanigans, basically,” Bowman said.

Bonner County in 2016 created a land use mechanism known as the minor land division, meant to “assist the individual owners who were looking to divide land for simple purposes,” according to Bonner County Planning Director Milton Ollerton. An MLD allows for the division of a parcel into four lots “without the public hearings, notifications and agency review” previously required.

“It was never intended to subvert the regular process,” Ollerton told the Reader.

However, in the five years since the MLD was adopted into county code, that is exactly what’s happened. Developers began to apply for contiguous MLDs, effectively building subdivisions without public or agency review.

Such has been the case with the Clagstone Ranch development, located northeast of Spirit Lake and already being marketed online as “a 380-acre private, gated community of five-acre homesteads surrounded by 1,000s of acres of public access forest lands.”

Clagstone Ranch has used the minor land division process to create its parcels: 72 so far, with 18 MLD applications. Because those applications are approved administratively, Project 7B board member Susan Drumheller said that neighbors “had no notice, no opportunity, to have public input on that.”

“The first time you find out about it is when it winds up on the consent agenda at a commissioners’ business meeting,” she said.

Developers were quick to jump on the MLD loophole, especially once the county started to publicly discuss ways to close it in 2020.

“This becomes a sort of green light to anyone looking to take an action prior to a change and move forward to beat the deadline for the change date,” Commissioner Dan McDonald told the Reader.

Through various drafts and months of work, the county adopted code in August of this year, which states that, “a minor land division shall not be used contiguously to avoid the regular subdivision process.”

“This change is working,” Ollerton said. “The Planning Department has turned away applications that appear to be contiguous and will continue to stop those using multiple applications to avoid the subdivision process.”

However, MLDs filed prior to the code change in August are not beholden to the new standards. Still, motions for reconsideration have been filed to challenge seven of the Clagstone Ranch MLDs. Project 7B has voiced support and provided financial backing for the action.

“Project 7B is calling for the county to review their decision to approve these MLDs and consider subjecting the development to a proper subdivision process that includes a public hearing,” the nonprofit shared in a Nov. 9 press release. “It’s the only way to ensure that everyone’s property rights are protected.”

Representatives for Clagstone Ranch did not respond to a request for comment.

When Drumheller urged commissioners to table a slate of four Clagstone MLDs at the board’s Oct.19 business meeting, Commissioner Jeff Connolly shared that the code’s loophole prompted him to have a conversation with Ollerton about “being a little bit more nimble when we see that people are taking advantage of our code and using it against us.”

“It didn’t seem like it was happening much, and then suddenly everyone was doing it,” Connolly said. “We learned. And I agree with Susan, that if you created 72 lots overall then you should have been held to a standard that all of this works together and everybody is on the same page.”

“I don’t know how I have the authority to go against what the ordinance says,” Ollerton said.

“You don’t. It’s not that I’m trying to disagree with that,” Connolly replied. “I’m just trying to say that we got schooled.”

Connolly’s comment from the end of that Oct. 19 discussion has stuck with Drumheller.

“I appreciated that, because we’ve all been schooled a little bit,” she told the Reader, in reference to the extensive use of contiguous MLDs. “In a way, it doesn’t surprise us, but it wasn’t something that we were super aware of.”

“Awareness” continues to be a guiding concept for Project 7B, which regularly shares information about upcoming rezones and code amendments in their newsletter and on their Facebook page. A post about the upcoming Pack River Partners 700-acre rezone had amassed nearly 60 shares by Nov. 17 — a testament to what is sure to be a heavily attended meeting.

Critics of the upzone — that is, rezoning an area to allow for more parcels — are quick to point out that splitting the more than 700 acres into 10-acre parcels could lead to more than 70 additional homes in the area, which could diminish the rural character of the neighborhood.

That was also the concern earlier this year when a rezone application in the Hoodoo Valley aimed to change 160 acres from agricultural/forestry to rural residential with a five-acre lot minimum. Planning staff recommended denial and the P&Z Commission followed suit, but by the time the file reached the board of commissioners for final approval, the Planning Department had changed its position. The board approved the file on a 2-1 vote. While the rezone has since been appealed and sent back to the P&Z Commission, that case sowed distrust in people like KBCR chairman Dave Bowman.

“The zoning is not meant to be a menu system from which you can come in and pick the one that you want your property to be,” he said, adding later: “It’s become a sham.”

Whether they be contiguous MLDs or widely opposed rezones, these concerns come down to one central conflict: Those who aim to protect the rural integrity of the county’s broader landscape, and a Planning Department that is seemingly willing to upzone, in Drumheller’s words, “anywhere and everywhere.”

“What [Bonner County is] hearing loud and clear is that people want to try to protect their rural way of life,” she said. “They want to protect this agricultural, forestry heritage, and they’re getting pushback on that.”