Shakespeare in the Parks to perform ‘Richard III’

Montana Shakespeare in the Parks (MSIP) will perform Shakespeare’s ‘Richard III’ at the Bonner County Fairgrounds in Sandpoint on Sunday, Aug. 21. Gates will open at 1 p.m., with the play starting at 6 p.m. The performance is free and open to the public. 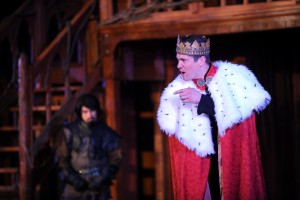 Sam Pearson as the title character in Richard III. Photo by Winslow Studio and Gallery.

People are encouraged to arrive early with chairs, blankets and picnics. Entertainment and vendors of a medieval flavor will begin at 1 p.m., including an authentic medieval village organized by the Sandpoint chapter of SCA (Society for Creative Anachronism).

The village features Ul-Fire Tribal Dancers—a tribal-style dance group—live music by Desiré Aguirre on the hammer dulcimer as well as students of the Sandpoint Music Conservatory.

Vendors will be on hand to offer their wares, such as a jewelry-making venue for children and adults, a hand-dyed yarn and spinning wheel demonstration by Kim and Brooke Spencer, herb and basket-making demonstrations and Lost Horse Press featuring poetry books.

Food vendors will serve lunch and dinner, also beginning at 1 p.m., if people prefer not to pack a picnic. Recycling of trash will be accomplished by Sandpoint’s Green Team, who make sure that everything that can be recycled,.

Montana Shakespeare in the Parks will perform William Shakespeare’s “Richard III” and “The Comedy of Errors” during its upcoming summer tour of 10 communities throughout Montana, Wyoming, Idaho, North Dakota and Washington.

The company features 10 professional actors selected from national auditions who tour without technical assistance to bring live theater to mostly rural communities. This summer, 66 percent of the communities reached by the troupe have populations of 5,000 or fewer.

“We are very much looking forward to producing both plays this summer,” said Asselin. “This will be the first time in MSIP’s 44-year history that we’ll bring ‘Richard III’ to our stage. ‘Richard III’ will fit right into what is already an active political year, reminding us how Shakespeare stays relevant even 400 years after his death.”

MSIP is an outreach program of Montana State University’s College of Arts and Architecture. Grants, corporate sponsorships, and hundreds of individual donors support the free performances. The company is also supported by the National Endowment for the Arts, along with other major sponsors. Each community host is also responsible for raising the funds necessary to bring the troupe to their community. Lost Horse Press would like to thank those grantors that have so generously contributed to bring ‘Richard III’ to our community, including the Idaho Commission on the Arts, Bonner County Fund for Arts Enhancement in the Idaho Community Foundation, Community Action League, Kochava, and Northern Lights.

For more information on the play and a complete tour schedule, visit the company’s website at www.shakespeareintheparks.org, or call local host Lost Horse Press at 255-4410.