‘I saw the mushroom cloud’

96-year-old pilot reminisces about the war

After being honorably discharged from the Army Air Corps in 1945, my dear friend Howard Riggs held various construction management positions and worked abroad in Saudi Arabia, Iran and Peru. In 2007 he moved to Spokane to be close to his son and daughter.

Riggs says that he got excited about flying at the age of seven. Inspired by Charles Lindbergh’s historic 1927 trans-Atlantic flight, Riggs starting taken flying lessons at the age of 18. 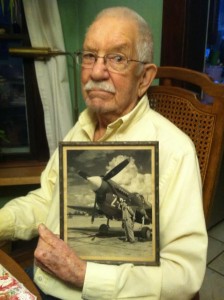 Howard Riggs holding a photo of him with a P-40. Courtesy photo.

In 1942 Riggs joined the Army Air Corps and received training on the P-40 Warhawk in Texas and Oklahoma. After that Riggs was stationed at Thomasville Air Base in Georgia.

Riggs was born in Panama, and he spoke fluent Spanish. He and six other officers were put in charge of the Esquadron 201 of the 300-man Mexican Expeditionary Air Force (MEAF). Starting in 1944, the Mexican pilots trained on P-40s in Greenville, Texas, and then later did over-water exercises in Brownville, Texas.

The Mexican pilots were from elite families, and Riggs says that he did not find them “mechanically inclined,” but they became good pilots nonetheless. (The residents of Greenville, however, complained about them “buzzing” the town.) The MEAF shipped out to the Philippines in January 1945 and saw heavy combat until October 1945.

The Battle of Ipo Dam

Riggs’ most memorable mission was 25 miles north of Manila at the Ipo Dam, the main water source for the capital city. In May 1945 the 43rd Infantry Division was sent to dislodge the Japanese from their positions. The Fifth Air Force, of which the Esquadron 201 was a part, flew 100 sorties a day in support of the 43rd.

Major George J. Modica II describes the final air assault: “On May 16th, 185 fighter-bombers struck the Palisades and Osboy ridge with 50,470 gallons of napalm. The next day 220 planes dropped 62,660 gallons. As planned, the attacks shocked the enemy, allowing tanks and engineers to clear” the way to the dam where the explosives set to blow it up were disarmed.

Later on a Manila sidewalk, Riggs was approached by a soldier who recognized him as a pilot. He asked Riggs: “Do you fly a P-47”? Riggs answered “Yes.” “Did you fly missions up near the Ipo Dam?” Riggs again said “Yes.” “You saved our lives!”

A Centipede Flies a P-47 Back From Zamboanga

On a much lighter note, Riggs loves to tell the story about the time he and a buddy brought back two P-47s from Zamboanga on the Philippine island of Mindanao. After the aircraft were checked and fueled, they headed back to Manila on what they expected to be a routine flight.

Riggs noticed that his friend’s plane was “all over the sky” as he puts it. He got on the radio and asked what the problem was. His friend said that a centipede had crawled up his leg and he was cutting it off in pieces. When they landed, they measured the unwelcomed passenger at 15 inches.

“I Saw the Mushroom Cloud”

In July 1945, after the Battle of Okinawa, Riggs, now in a different squadron, was stationed on that strategic island. From there they did daily missions to the island of Kyushu to prepare for a ground invasion of Japan.

On Aug. 7 Riggs saw the mushroom cloud of the Hiroshima bomb still billowing up to 60,000 feet. Riggs says that he firmly supported Truman’s decision, knowing full well that the ground war that he and other airmen would support would result in millions of casualties on both sides.

The Day Riggs Flew Through a Tree

During all his flying, Riggs is proud to say that he never got hit nor did he have any accidents. He did, however, fly through a tree one day. After pulling up quickly after a strafing run on Kyushu, he looked up to see a tree in front of him. He simply pulled back on the stick, busted through the branches, and returned safely to base. That tree obviously needed a trimming.

Tears for those Saved at the Ipo Dam

Every time Riggs tells the story about saving those men at the Ipo Dam he tears up, and I join him in sharing these heart-felt emotions. He considers that moment the high point of his military career. Let’s us all honor him and those of the Greatest Generation for their courage and perseverance.

Nick Gier of Moscow taught philosophy at the University of Idaho for 31 years. For the full version with all pictures go to www.NickGier.com/RiggsMushroomCloud.pdf.