It took the better part of a decade, but Pine Street Woods is officially in the hands of the community.

Kaniksu Land Trust announced last week that it acquired the Dover-area property after years of effort, securing 180 acres of woodland for public recreational use. It’s a chance for the public to enjoy all the benefits North Idaho forests have to offer, as well as a resource for local nature-based organizations like the land trust’s own summer camp, Camp Kaniksu. 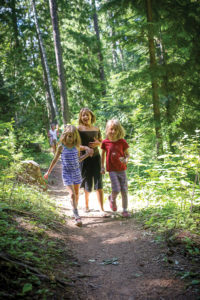 “We really need a place that will allow people to get outdoors after work, or for a few hours on the weekend, to hike, mountain bike, or experience the woods with their kids,” local parent John Gaddess told the Kaniksu Land Trust staff. “It’s been a challenge for families like ours to take a longer-distance trip when we are juggling other activities like work, school soccer or getting things done at home. This will be a great complement to our in-town parks.”

While the hard part — actually raising the money to purchase the land — is over, Kaniksu Land Trust still has some work ahead of it before Pine Street Woods is ready for the public. The area needs improved access roads, a parking area, fencing, signs and trails before it achieves its destiny as a community playground. According to Kaniksu Land Trust Outreach and Development Coordinator Cami Murray, that work will unfold over the spring and summer, with the woods projected to open for the public by mid to late summer.

The road to preservation was a long and rocky one, with six years of planning and two years of active fundraising leading up to the acquisition. Donations both big and small poured in to meet the fundraising goal of $2.1 million. Help came in other forms, too. Landowner Lester Krause donated 20 acres of his own property adjacent to the Pine Street Woods last year, giving up forest that was originally homesteaded by his grandparents. At a ceremony in his honor last year, Krause said he donated the property for the benefit of local young people.

The Pine Street Woods purchase adds yet another jewel to the crown of local outdoor recreation. What’s more, Kaniksu Land Trust officials believe that without community intervention, the forestland’s slow, piecemeal development would have been inevitable.

“This is an example of what can happen when people see an opportunity to enhance our community and provide a place to connect with nature, close to home,” said Regan Plumb, the land trust’s interim executive director. “Many people who donated to the project have lived in the area for generations, some are newer to Sandpoint. It’s incredibly inspiring to see our community jump at a once-in-a-lifetime chance like this to conserve a special place as a community treasure.”