Some amazing thoughts came to me on our 11-hour flight from Osaka, Japan, back to the States last month. The first was the difference between 2019 and 1957 when it took our Navy family 10 days to cross the Pacific Ocean in a converted World War II Liberty ship — the kind that was cranked out in shipyards to the tune of one every 42 days. The fastest build was less than five days. What a difference 62 years make. One of my last thoughts of the flight was mental and physical befuddlement caused by the International Date Line: We landed in Los Angeles before we took off in Japan! Then again, I’m easily confused. 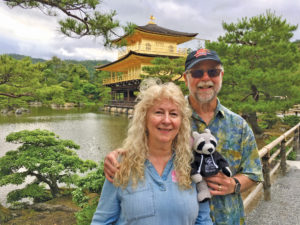 A.C. and Pamela Woolnough pose at the Kinkaku-ji Zen Buddhist temple in Kyoto.

Another oddity is how different cultures see time differently. The other day, I drove north on Highway 95 and saw the newly refurbished Taco Bell. Here was a building about 25 years old that was essentially re-built. In Kyoto, there is a restaurant that has been in continuous operation for 540 years that gets furbished (yes, that’s a word. I looked it up) every now and then — say once every couple hundred years. How cultures view time is one of the distinguishing characteristics between Western and Eastern thought.

We Westerners lack the perspective of many Asian cultures. In America, delayed gratification is becoming rarer, or I’m becoming more curmudgeonly, or both. Patience is often described in terms of minutes, hours or days. With our never-ending political cycle of raising funds and being obstreperous to the other party, our timelines don’t go far into the future. In Japan, they have Bonsai trees over 1,000 years old! Patience is measured in decades and centuries.

Another random thought was deciding to list all the songs I could with time in the title. Without cheating (checking the internet), how many can you, the reader, think of? I only made it to 11. FireFox led me to a list of the top 50. Who knows how many there really are?

By now, regular readers of this column may be thinking, “I thought this guy wrote about Parkinson’s disease. What’s the deal with this philosophizing about time?” You are correct; I am supposed to be writing about the fifth World Parkinson Congress that was recently held in Kyoto. I am still processing our trip (my angel, Pamela, was with me) many days later.

Our journey began three years ago in Portland, Ore., at the fourth WPC. I was blown away to participate with almost 5,000 of my new best friends as we explored everything about Parkinson’s over the course of four days. A few months later, I was selected as a WPC ambassador to promote the next triannual gathering in Kyoto. Fifteen of us, world-wide, worked to encourage the PD community to participate in “the only totally inclusive international forum on PD. Physicians, scientists, nurses, rehab specialists, care partners and people with Parkinson’s join together… to increase knowledge about the disease…” As an ambassador, I took Parky, the official, stuffed-raccoon mascot of the WPC, to five countries, 16 states and Washington, D.C. Arriving in Kyoto, we added Japan as a the sixth country.

We arrived late on June 1, somehow losing a day in our travels — that damnably confusing International Date Line again. Sunday and Monday were primarily rest days trying to adapt to the local time and deal with jet lag. We did take the subway to the International Conference Center to get a feel for the venue. Monday evening, we were invited to a cultural reception. I learned I don’t care for sake — Japanese rice wine — but Suntory whisky is pretty good. We were entertained by a traditional Geisha performance of music and dance.  An array of traditional Japanese cuisine was provided. Some of the food had tentacles and suckers! Tuesday morning found me at the ICC at 7:30 for my eight-hour stint as emcee, host and moderator for an all-day pre-conference workshop primarily for those new to Parkinson’s. Of the 18 speakers, I met 15 for the first time that morning. What a group. Our “let’s get up and move every 45 minutes” facilitator (Pamela Quinn) has danced with Twyla Sharp. Soania Mathur was awarded the Distinguished Contribution to the Parkinson Community honor. Those are just two of the outstanding folks making presentations. Did I mention the WPC also had a Nobel prize winner as a speaker?

To put the WPC in perspective, nearly 3,000 people attended. They were from over 50 countries. Around 60% were first timers to a WPC. At any given time, there were up to 19 possible presentations to choose from. Topics varied from “Selective neuronal vulnerability: What we can and cannot learn about the Pathogenesis of PD using disease models” to “Sexuality and intimacy in PD for people with Parkinson’s and their partners” and everything in between. To get a better sense of the offerings, the program was 150 pages. There was so much information to be shared, it was like drinking from a fire hose. Intense is a good word to describe the Congress.

The best part of the WPC was the people. I re-connected with folks from the Portland Congress and made many new friends. Outside the ICC, we interacted with many of the locals — on the subway, at meals and while playing tourist. Language was rarely a barrier thanks to Google Translate. Also, many of the Japanese we were with spoke some English — although they were a little shy about using it.

As a tourist, Kyoto has a wealth of places to visit. Kyoto was the capital of Japan for over 1,000 years. It has 17 World Heritage sites including castles, temples and shrines. Despite few, if any, public trash receptacles (a security precaution following a terrorist incident in 1995), Kyoto (and all of Japan that I saw) was impeccably neat and clean — especially the subway. Because most of the week was hectic and frenetic, Pamela and I decided to find a quiet, tranquil and peaceful location where we could absorb our experience in a mindful way. That’s how we ended up at the Kyoto Botanical Garden. It was the perfect ending to our excellent adventure.

For the last 50 years or so, scientists are saying something about a cure in the next 10-15 years. That window of time has yet to happen. Although new and improved therapies are on the horizon, there is still no certainty when a cure may be discovered. For all of us in the Parkinson’s community, it’s about time we make more, better and faster treatments.

Chicago (the band, not the city) asks, “Does Anybody really Know What Time it is?” Billy Joel captures our angst about waiting for a cure with “The Longest Time.” Scientists, on the other hand, have a link to Bob Dylan, who suggests “The Times They Are A-Changing,” while the Beatles believe researchers are working “Eight Days a Week.” Of course, The Stones have a depressing thought for some of us that we are “Out of Time.” I saved my favorite title for last. When is it time for a cure? The Chambers Brothers sing the “Time Has Come Today.”