Reclaim Idaho co-founder Luke Mayville announced in an email Sunday that his grassroots political group has collected 29,000 signatures for their Medicaid for Idaho campaign — more than half of what they need to get Medicaid expansion on the 2018 ballot. 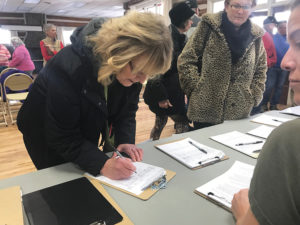 Hope resident Ellie Lizotte pens her name on the Medicaid for Idaho petition during the Dec. 16 signature collecting event. Photo by Lyndsie Kiebert.

Those signatures were collected exclusively through a volunteer effort, he said.

“The volunteer-led, volunteer-supported nature of our effort makes Medicaid for Idaho an extraordinary campaign, and all of us should be proud of that,” he wrote.

To collect the remainder of the needed signatures — about 27,000 — Mayville said Reclaim Idaho will use paid signature gatherers through the Fairness Project, a non-profit that helped Maine get Medicaid expansion on the ballot, to collect signatures in a few “key locations” around Idaho.

Mayville said they have six weeks to collect the remaining signatures. He said with the combination of the ongoing volunteer effort and the paid signature gatherers, Reclaim Idaho is “poised for victory.”

“We’ve always said that our goal is not just to fix our healthcare system, but also to revive our democracy,” Mayville wrote. “Together, our statewide campaign is proving that democracy still matters; that real change can be won through collective action; that the powers that be are no match for we the people.”

To learn more about Reclaim Idaho and their Medicaid for Idaho campaign, visit reclaimidaho.org.