Dude, ‘The Big Lebowski’ comes to the Panida big screen

What’s in a name? Everything, according to the cult classic 1998 film “The Big Lebowski.” 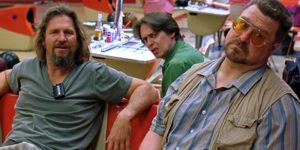 “You know, Dude, I myself dabbled in pacifism once. Not in ‘Nam of course.”

Written and directed by Joel and Ethan Coen — the minds behind “Fargo,” “O Brother, Where Art Thou?” and “No Country for Old Men” — “The Big Lebowski” centers on a case of mistaken identity. It all starts when two goons break into the apartment of L.A. stoner Jeffrey Lebowski, who goes by The Dude. Based on the state of his pad, it’s clear that Lebowski has neither money nor a wife, yet the goons insist that Mrs. Lebowski owes their boss a ton of cash. After roughing up The Dude, they leave with a warning to deliver the money or else. Then they take a leak on his rug.

The Dude (played by Jeff Bridges) soon finds out he’s been confused with another Lebowski — the Big Lebowski — who has both a wild-child wife and loads of dough. The Dude approaches the old man about replacing the peed-upon rug and ends up in a snarl of schemes that include nihilist hustlers, a Malibu pornographer, a “strongly vaginal” artist and, of course, The Big Lebowski and his wife Bunny, neither of whom are what seem to be.

Along for the ride are The Dude’s bowling buddies Walter and Donny (John Goodman and Steve Buscemi, respectively), making an unlikely trio of heroes on a bumbling crusade for truth, justice and a rug to tie the room together.