SARS: Learning to fly on top of the mountain

While winter has intensified in recent weeks down here in town plenty of exciting action has been taking place up on Schweitzer Mountain, with hundreds of athletes flocking to the North Idaho from all over North America to compete in ski races hosted by the Schweitzer Alpine Racing School. 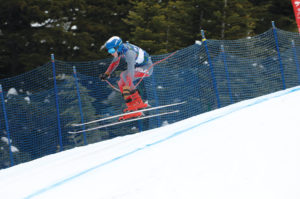 In the first week of February SARS hosted the International Ski Federation Western Region Speed Series races, which brought over one hundred 16-19 year old athletes from ski clubs from as far off as Calgary, Canada to Lake Tahoe, California to Park City, Utah to Schweitzer for two “speed events”: a “downhill”, in which athletes reach speeds of up to 75 miles per hour in a race with almost no turns, and a “super G” (short for super giant slalom), which follows the same track as the downhill but includes more gates around which athletes must maneuver.

Schweitzer Mountain Resort provides SARS with a fantastic venue for the club’s races, which include not just speed events for the older athletes but also Youth Ski League (for 7-11 year olds) and junior races (for 12-15 year olds) in four disciplines: the two “speed” events of downhill and super G and the “technical” events of slalom and giant slalom. On Feb. 22-24 ski clubs from around the region will gather on Schweitzer’s Zip Down run (off of the Stella lift on the north side of the resort) to compete in the Pacific Northwest Ski Association giant slalom and super G races for U14 athletes (those who are 12-13 years of age).

Races like the FIS speed series and the U14 PNSA races are made possible thanks almost entirely to the efforts of volunteers. Because the Sandpoint-based club is a non-profit organization, tuition is kept low to make the sport affordable to families who want their children to experience the sport of ski racing. In return, club members learn lifelong lessons about safety, fitness, and responsibility while refining their skiing skills in a competition-based program.

Most children participate with SARS for several years, which enables the club to instill its core values of teamwork, discipline, health and wellness and citizenship. These values promote quality citizens engaging in a high standard of life. Ski racing is a demanding sport, especially for teenage athletes, who in order to remain competitive must train at least three days per week and travel to races around the country. At the highest level, FIS athletes usually ski five days per week and attend training camps during all four seasons, including over the summer when they will travel to Mount Hood, Whistler, or even to the Alps of Switzerland to train on high alpine glaciers. 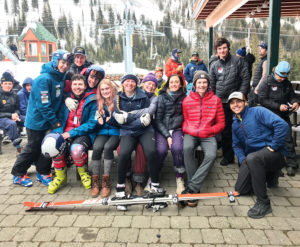 SARS FIS skiers after a week of racing. Photo by Wendy Panos.

SARS currently has two Sandpoint-based FIS athletes, both of whom have grown up skiing for the local team and have managed to stick with the sport throughout their high school years. Addison McNamara, currently a junior at Sandpoint High School, and Farli Boden, who graduated from SHS last year and is taking a gap year to focus on her ski racing career, represent SARS and the Sandpoint community at races around North America and right here on our local hill.

While very few athletes manage to make it to the FIS level, the club serves a much broader base of families at the lower age groups. The STARS (Schweitzer Tiny Alpine Racers) program currently includes 40 five and six year old skiers, about a dozen of whom are Sandpoint locals, and the youth program servers another 160 athletes between ages seven and twelve, many whom commute each weekend from the Coeur d’Alene and Spokane areas to participate in SARS events.

For families with kids in SARS, the club is about more than just learning to be a better skier. SARS is a community, and through their efforts as race volunteers or by helping put on the annual SARS Ski Swap the Bonner County Fairgrounds or by attending the annual fundraiser dinner auction, SARS athletes and their parents often form lifelong friendships with one another.

If you want to learn more about the club or its activities, drop by the race venue on Feb. 22-24 to check out the action or visit our website at www.sars.net. Enrollment for next season will open up in early September 2019 and continue through the end of October. With demand high, our programs fill up quickly, but SARS welcomes new families every year, and would love to expand our membership from right here within the Sandpoint community.